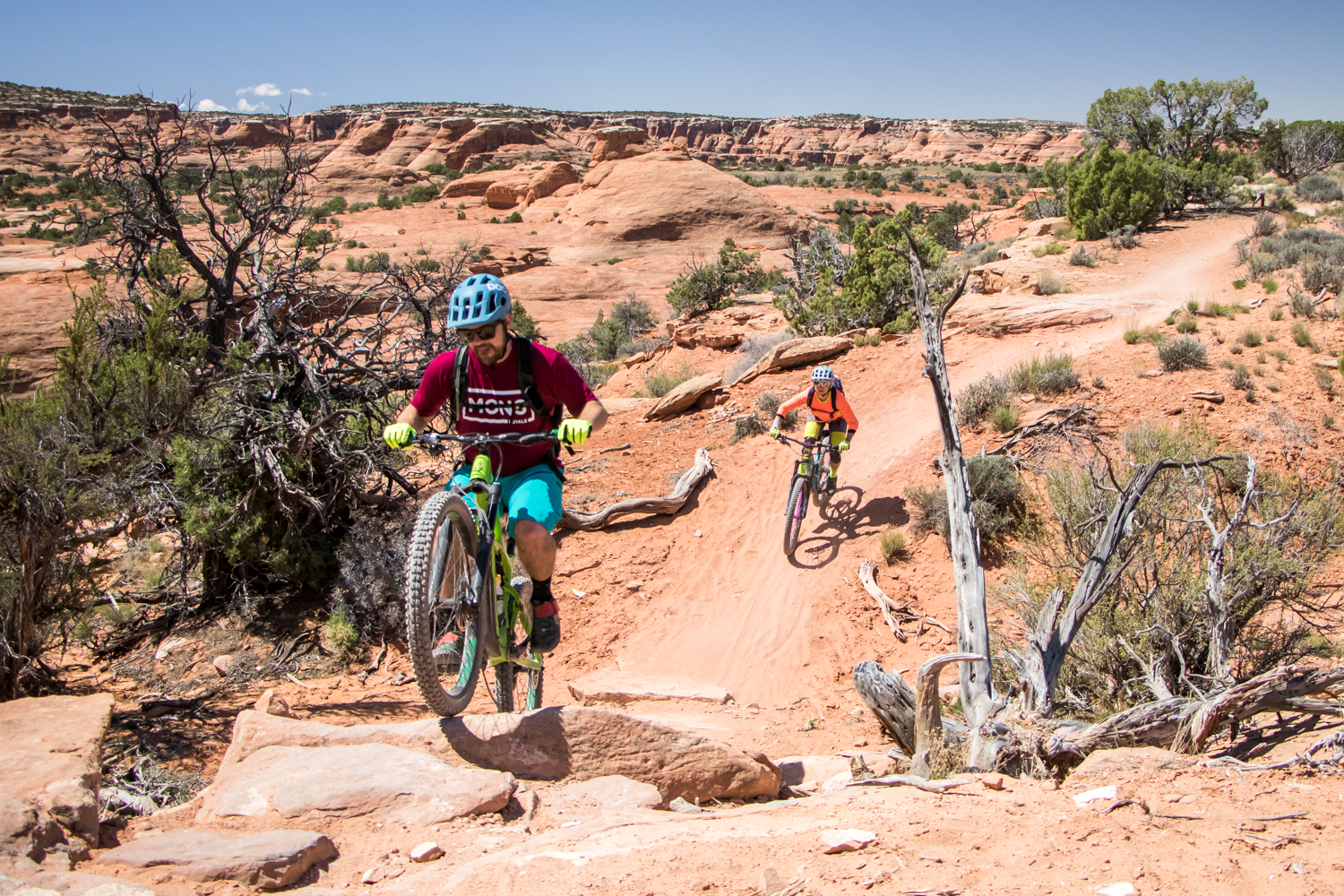 With every Chasing Epic trip, we integrate mountain bike photography- group shots at lookouts, action shots, vast landscapes.  It’s something we love, and it adds an extra element of adventure and excitement to the Chasing Epic experience.  Not only does it let us capture the emotion of the moment, but it’s rewarding to provide a lasting memory to so many of our clients from a bucket list trip.

If you’ve been on one of our trips, you know what the “enduro pose” is: weight back, elbows out, and make sure you LOOK like you’re going fast for the camera!  The following images contain a few of those shots (and most likely, those guys ARE going fast), as well as some epic weather conditions and a few surprises thrown in for good measure.  Enjoy, and we’ll see you in 2018! 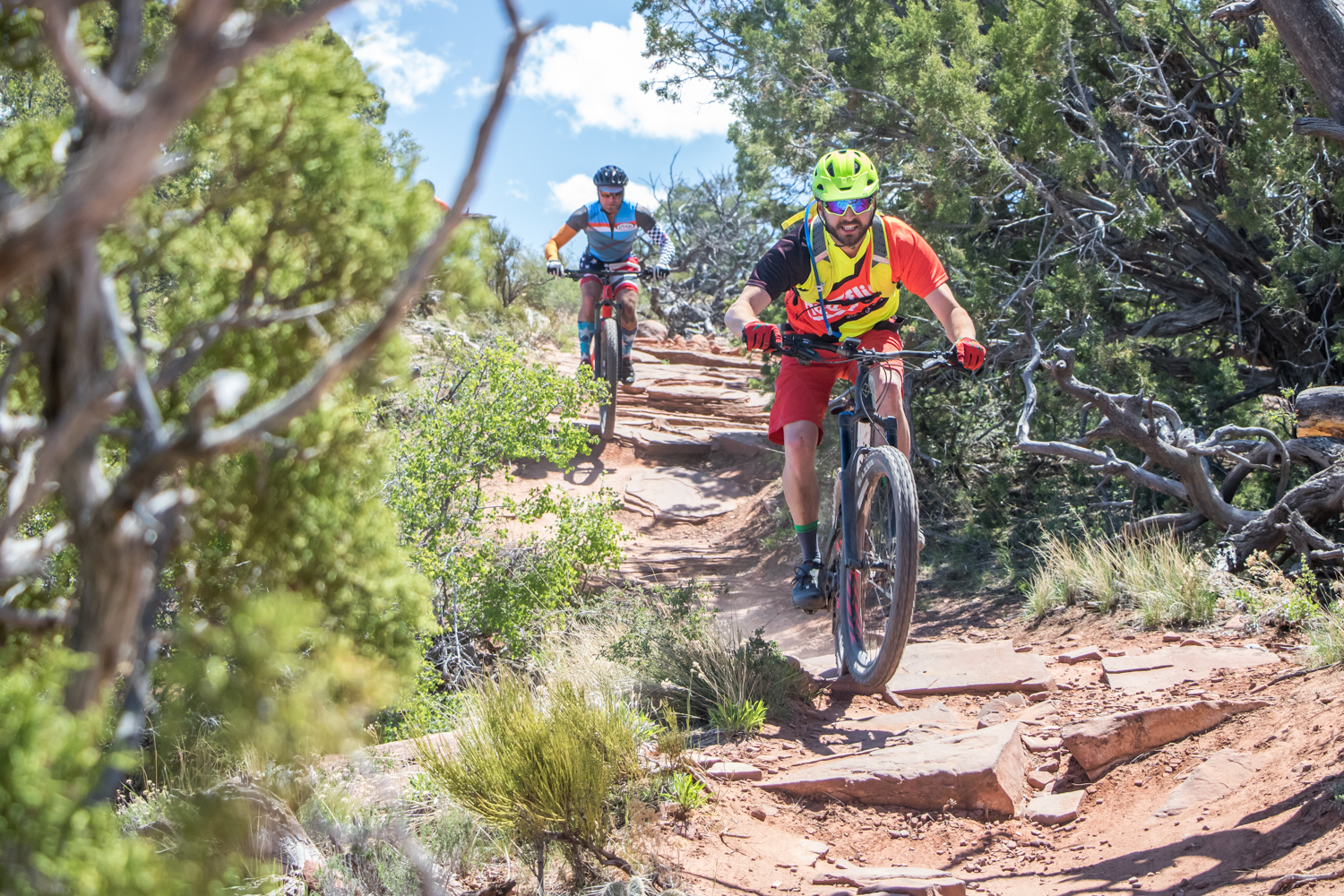 Our first trip of 2017 was hosting a private group of absolute rippers in Moab, and on Day Three we hit The Whole Enhilada.  At that point of the year, we were able to ride from Kokopelli down (while including Jimmy Keen too, making it a 28 mile day) and we had the place to ourselves mid-week.  The group of 12- including guides- was never spread out more than a couple minutes at any point.  This was a shot of two group members ripping UPS – look closely, the rider in the back was sporting his cutoff American flag jean shorts! 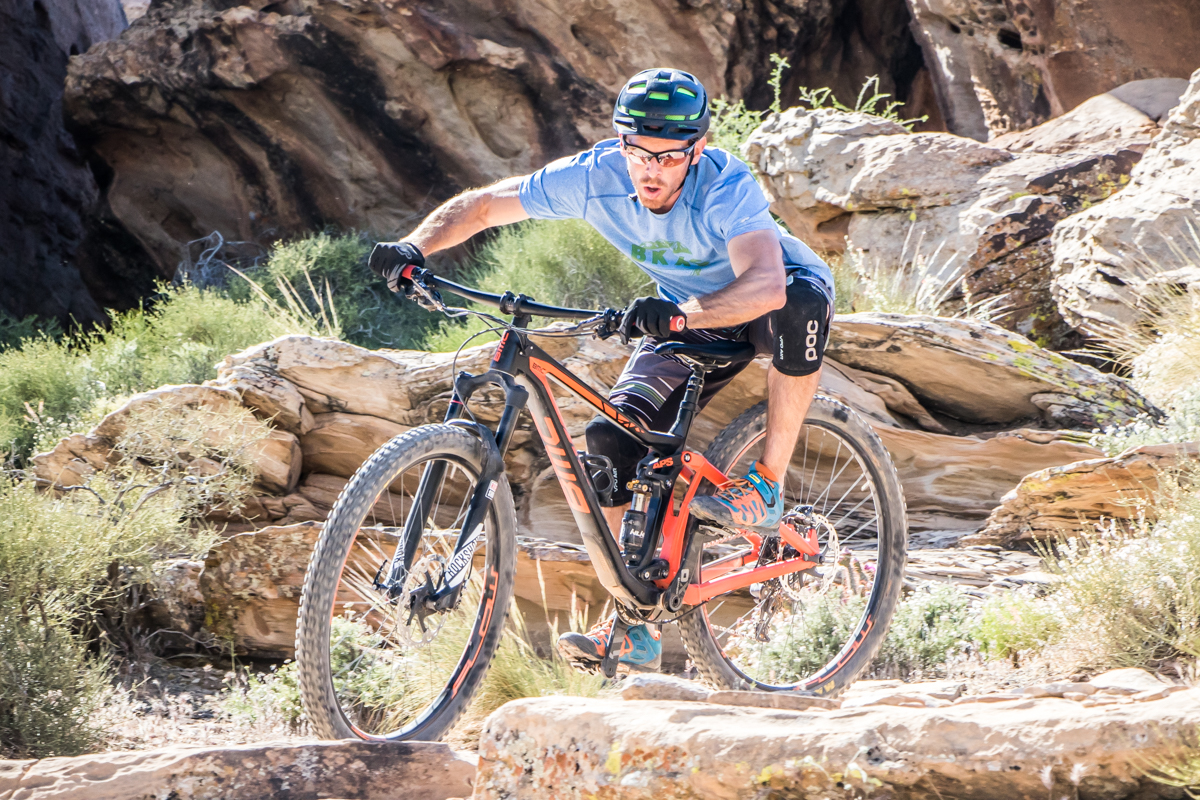 Some of our rides get pretty intense- and the Zen Trail in St. George is one that brings out the best in everyone; it’s one of the most technical descents in the St. George area.  Back in late April we hosted the BKXC crew for four days of mesa riding and high-desert fun, and captured this shot of Brian himself with a look if extreme concentration as he maneuvered the BMC TrailFox down the steep stuff.  Definitely NOT a staged enduro pose here! 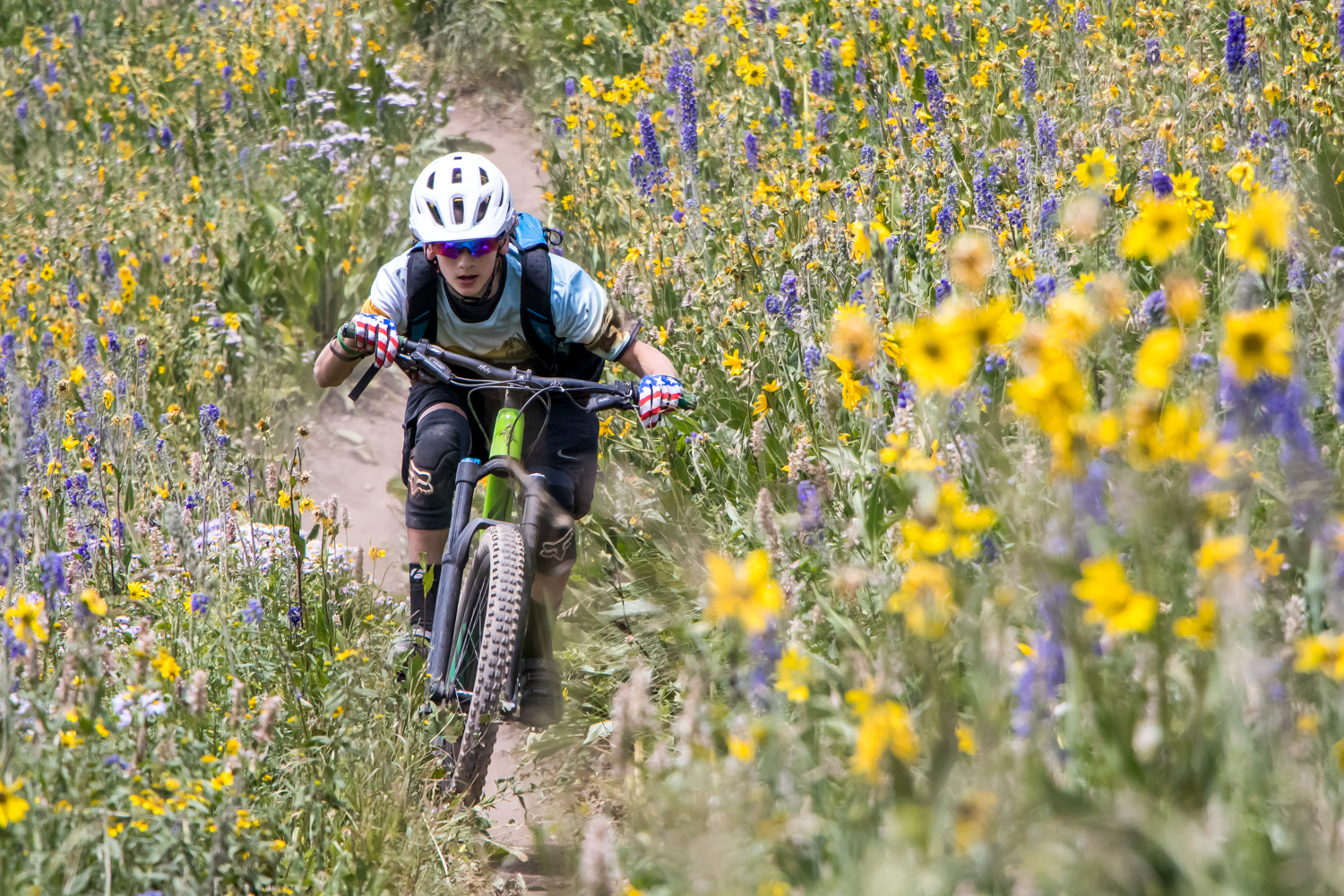 At Chasing Epic, we occasionally have teens come along with their parents on our trips… and most of the time, we find that it’s the kids who drag the parents along for the epic adventure!  Back in July, Russell joined us from New Hampshire and promptly showed the Crested Butte crew how to rip!   In mid-July the wildflowers were peak, and the trail coming down from Teocalli Ridge was absolutely perfect. 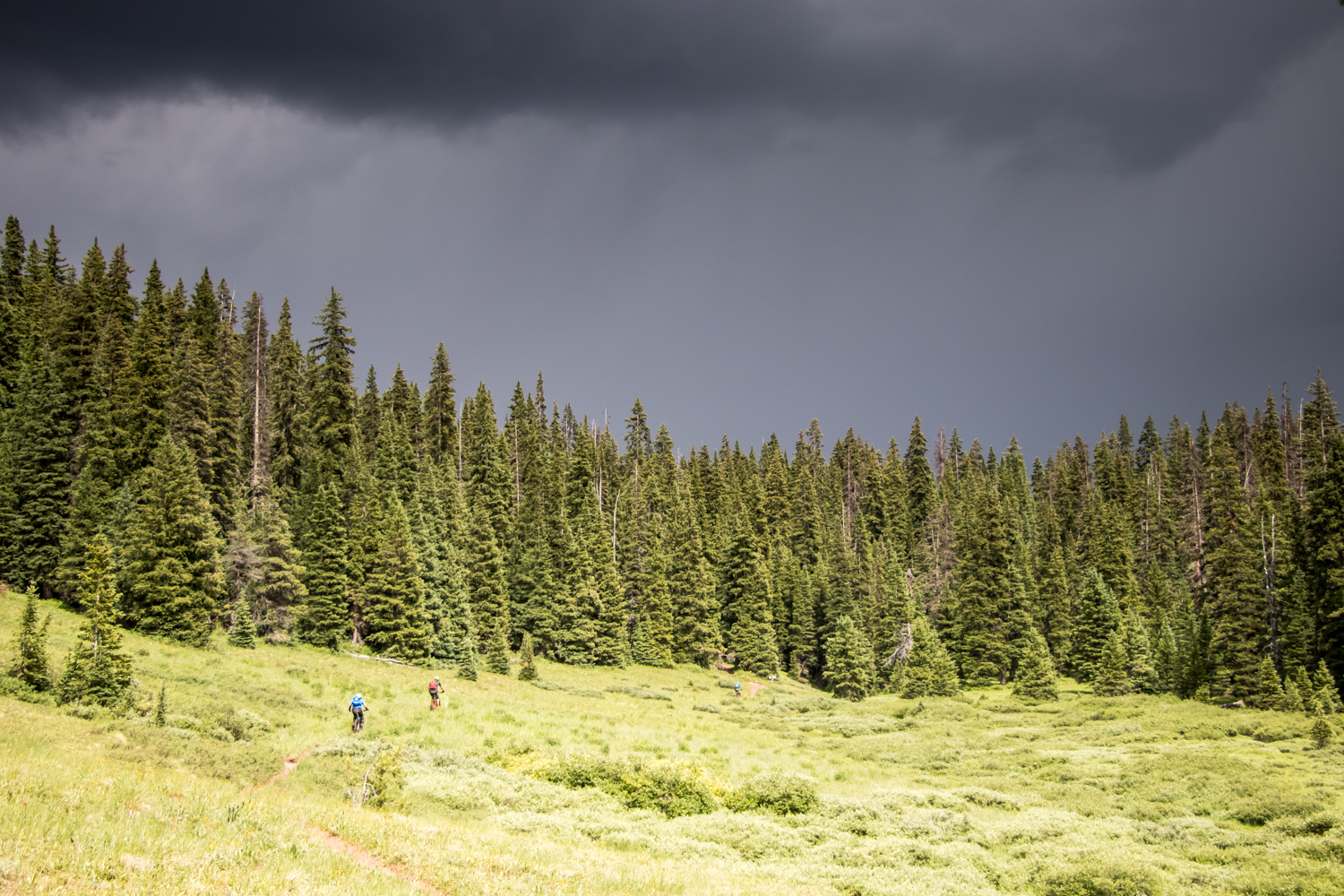 Summer in Crested Butte throws some pretty crazy weather at you, and this past July was no different.  On the third day of our trip, we planned out a HUGE ride for those looking to push themselves, and the weather made it that more epic.  After topping out on Star Pass at over 12,000 feet, we were chased by thunderstorms and hail over Block and Tackle, and down Cement Creek all the way back to the van.  What a ride! 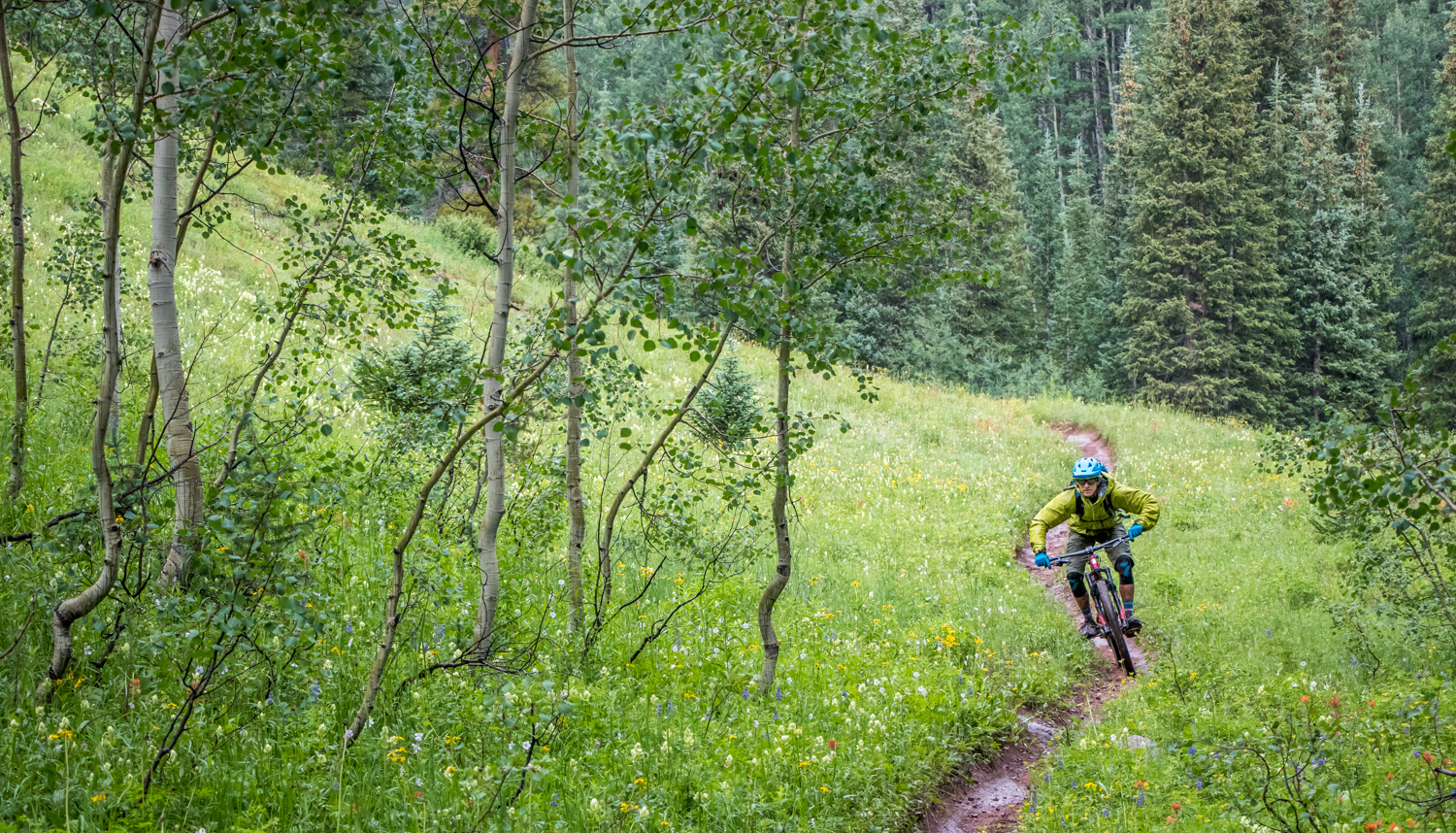 Just because it’s raining doesn’t mean we can’t stop for pictures!  At the bottom of the Block and Tackle trail is one of the best setups for summer and fall aspen shots we’ve seen- so it’s only natural to capture a few images.  Our guide, Ben, showed the rest of the crew the way down, and even though the trail looks sloppy, it managed to be just about perfect despite the rain. 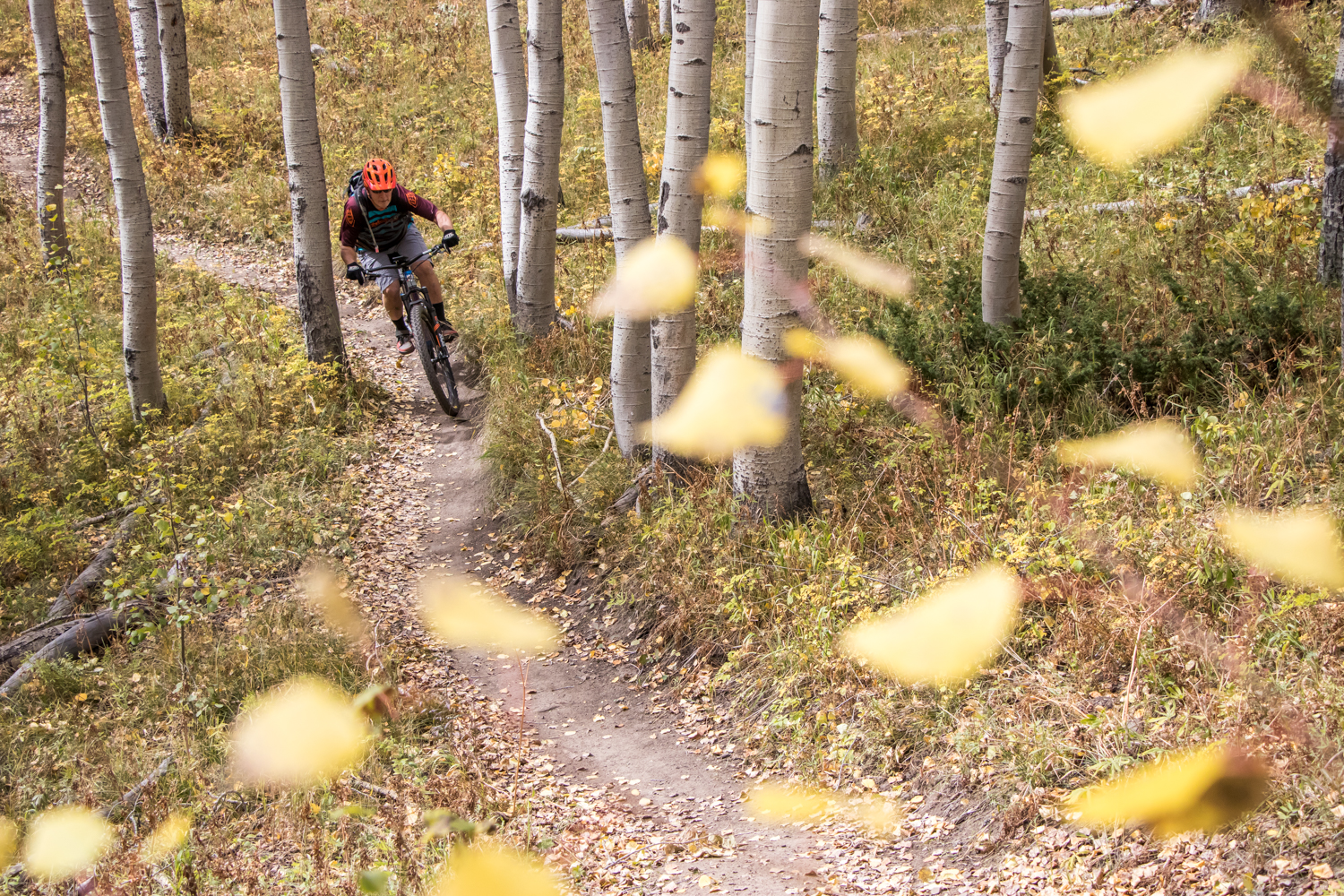 Nope, those aren’t potato chips… those are golden aspen leaves falling on the trail in Crested Butte.  Fall trips to CB are our favorite, and we’ll gladly spend our entire September and October chasing the colors.  It’s truly magical.  Mike threaded the needle on the Gunsight Connector to show just how tight the spaces can get in-between the aspens. 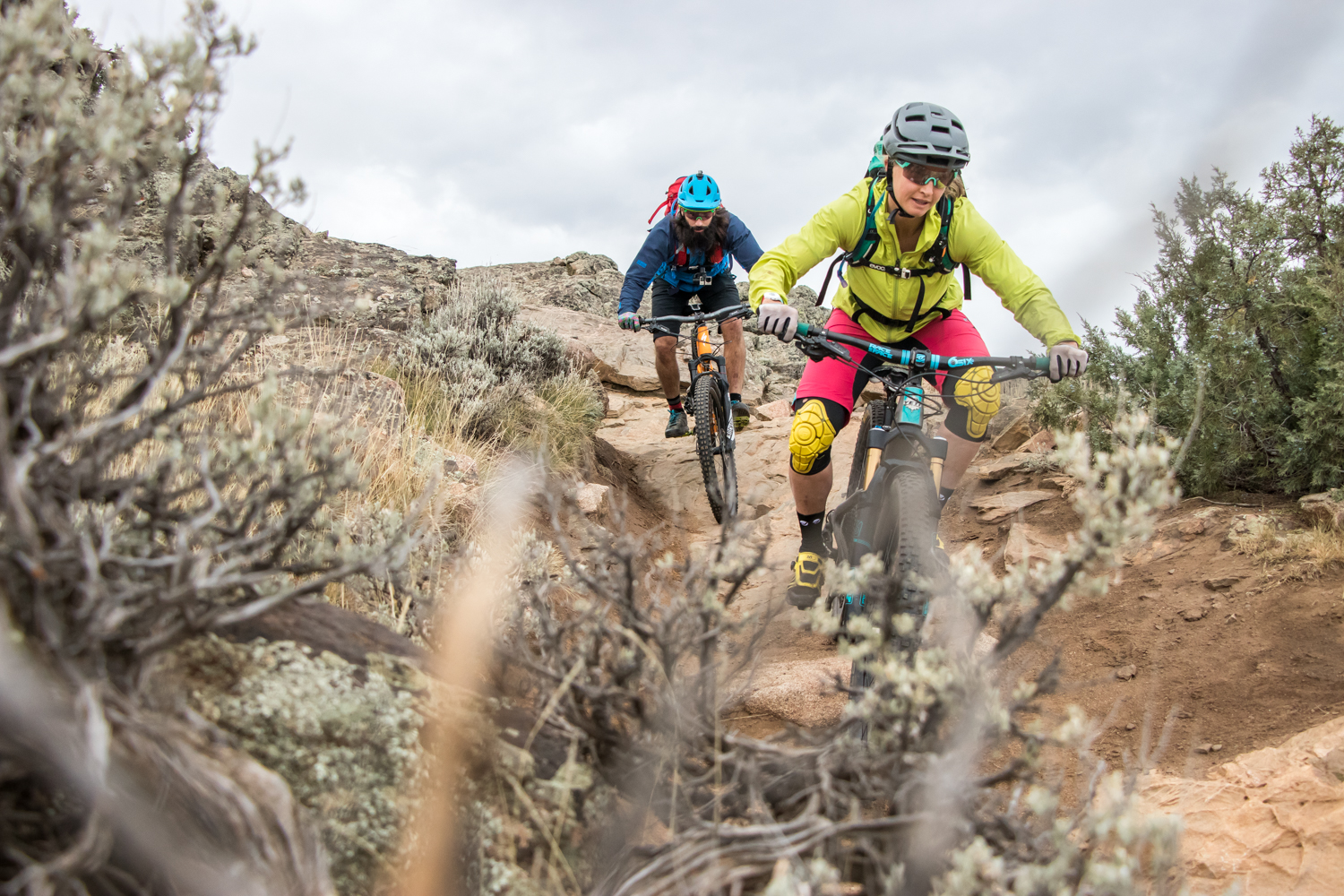 In late September, we hosted The Singletrack Sampler (that’s Alexander in the back, following our guide Sydney) with a group of his fans for a 4-day trip in Crested Butte.  Thanks to some pretty crappy weather, we spent one of the days down in Gunnison on the Hartman Rocks trail network, which is always an amazingly fun change of pace and scenery from the high-alpine environment of Crested Butte.  We spent all day ripping the high-desert singletrack, chasing each other down and knocking out 20+ miles of killer riding. 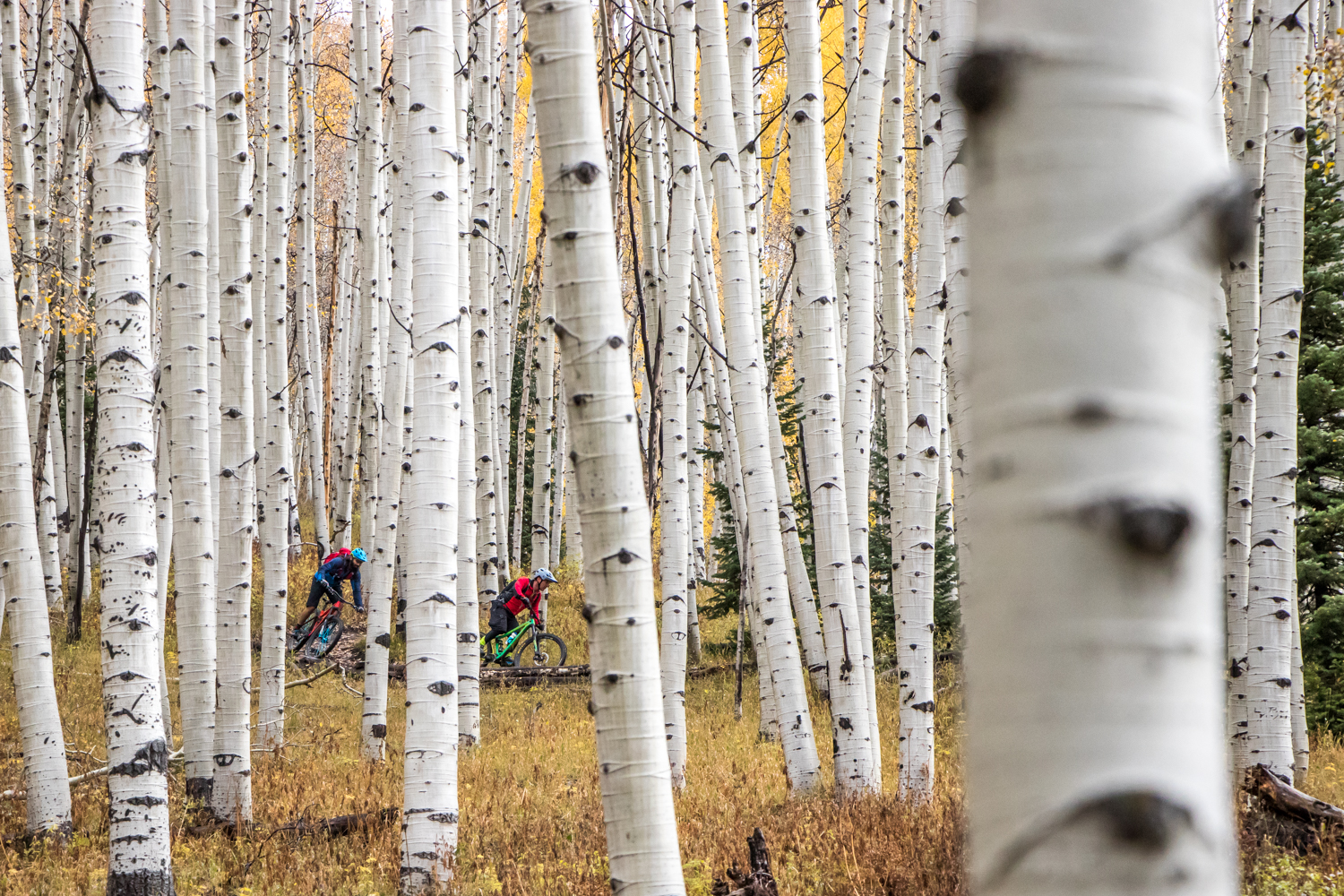 Same trip (as above), different day… on our last day, we knocked out 15 miles of some of the most fun, beautiful trail you’ll ever imagine.  Connecting Lupine, Gunsight and the Lower Loops always makes for an amazing last (or first) day, and this trip was no different.  We started off riding through the fog- see below- and ended basking in the warm sun while riding through the streets of Crested Butte. 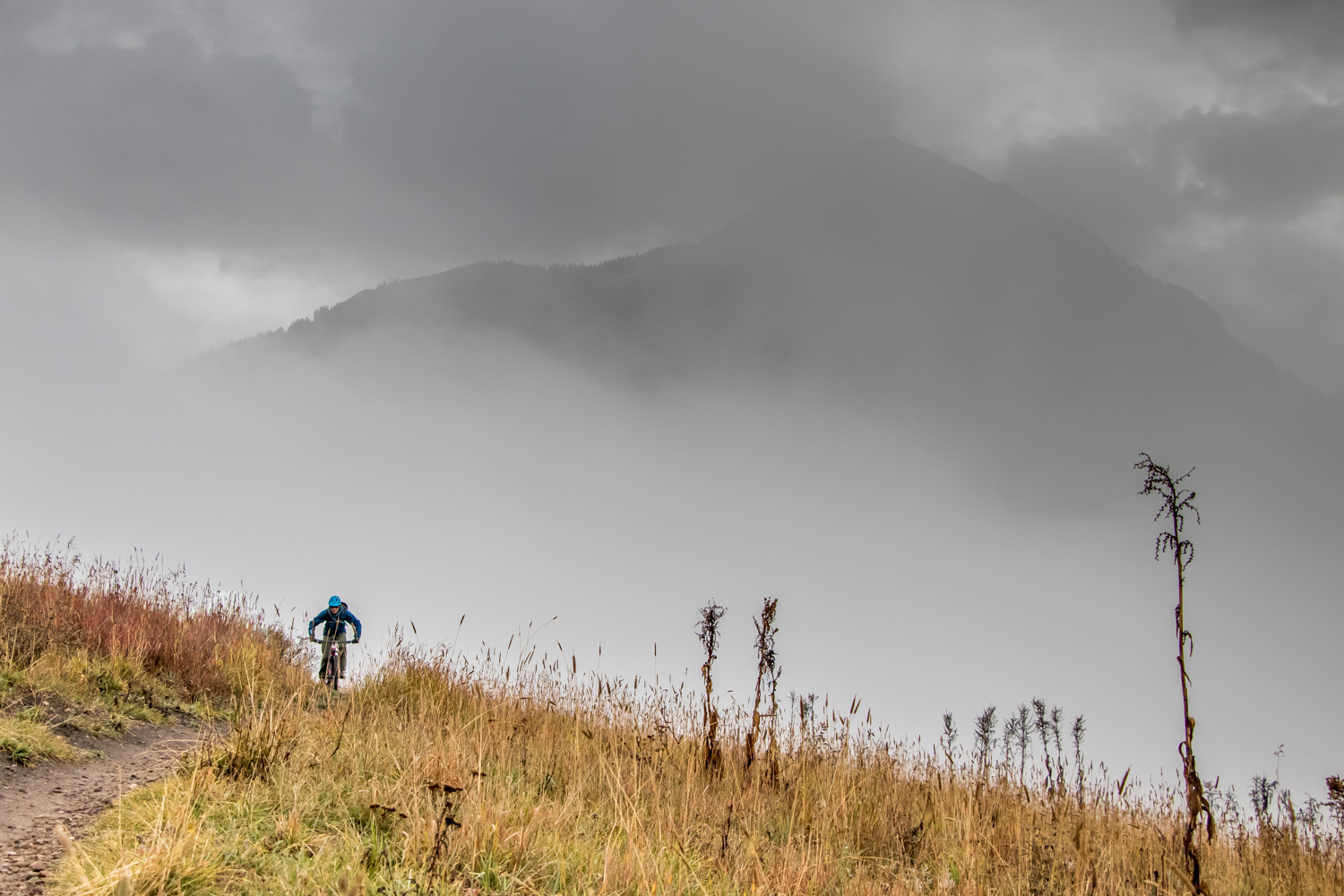 It’s pretty normal for fog to set up on fall mornings in Crested Butte, as town sits in a valley surrounded by 12,000 foot peaks.  Our last day was no different, but we knew it would make for an amazing ride.  That’s 12,000-foot tall Mt. Crested Butte looming in the background, as he rips down Upper Lupine heading into the aspens. 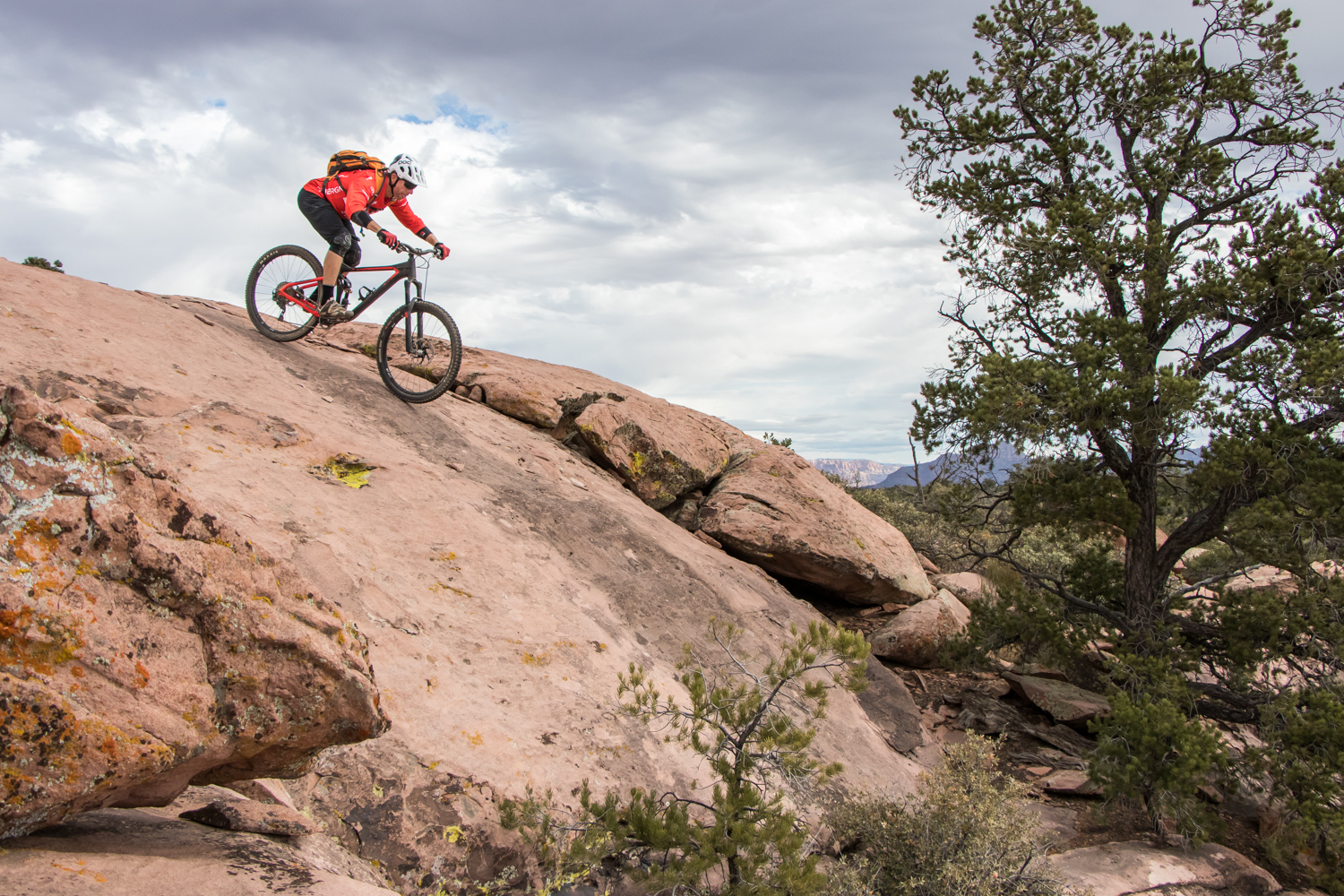 Little Creek Mesa in St. George is a virtual playground of rock features and rollers.  We hosted a private group in early November for four days of fun, and managed to find all the good stuff… as much as they could handle!  This is one of our favorite spots; a great run-out and a pretty sick view (from the top) of Zion National Park, just barely peaking through in the background.