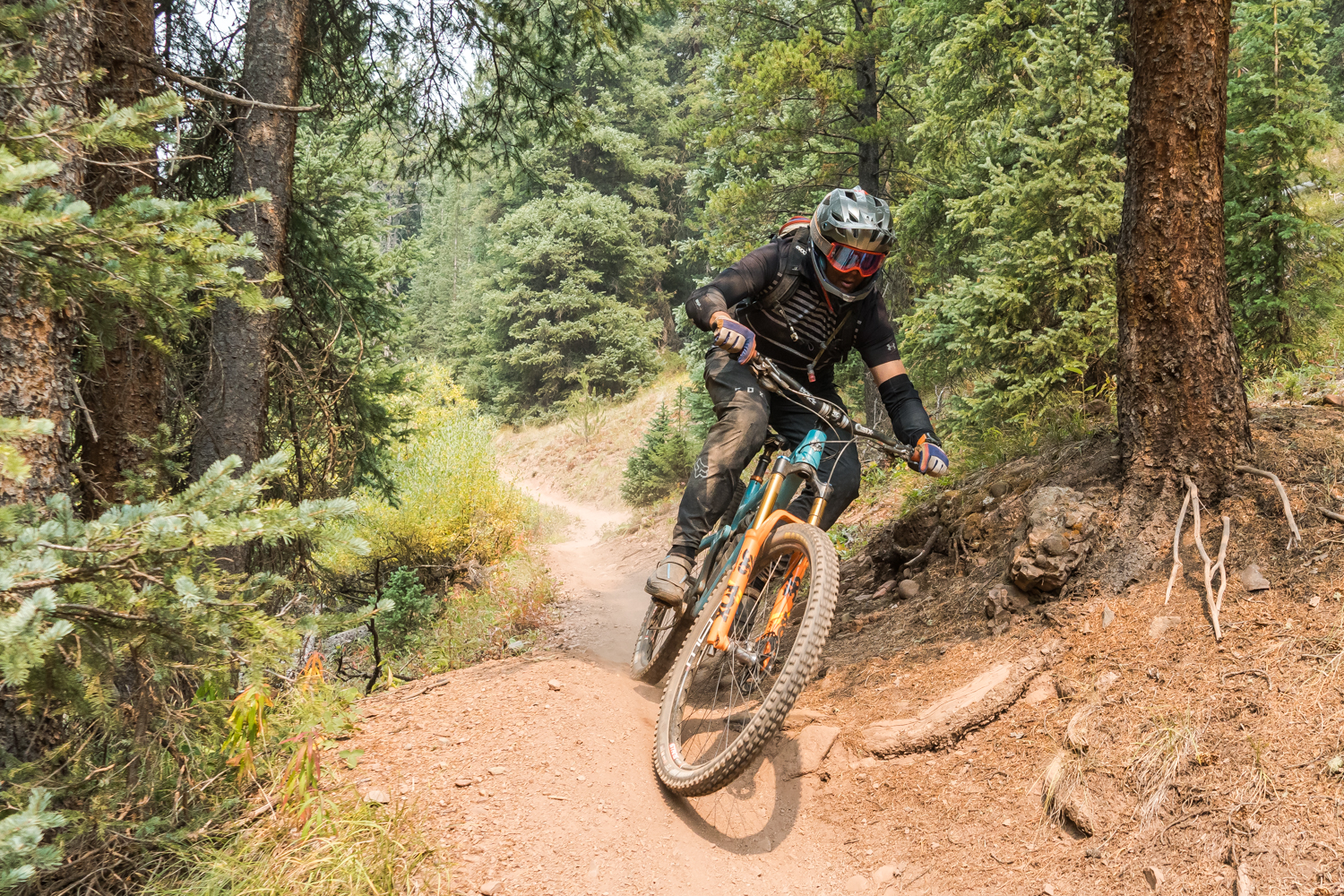 In a series new for 2021, every so often (we’re hoping for once a quarter!) we’re going to put the spotlight on one of our awesome repeat clients, and let them tell their mountain bike story through a series of questions.  To kick things off we talked to Ryan, who has been on a Chasing Epic trip to Moab, Crested Butte, and Brevard. 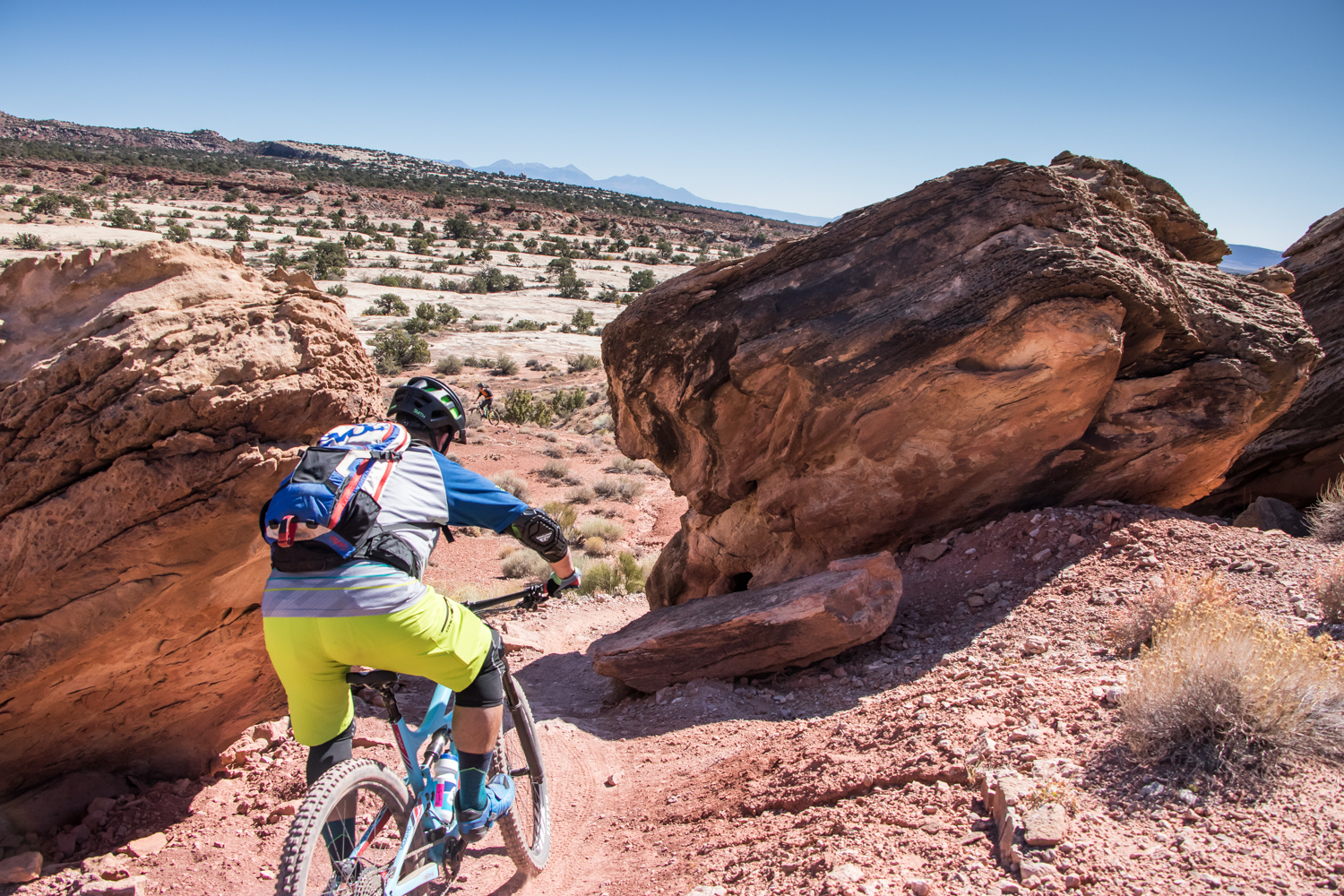 Tell us a little bit about yourself:

I’m from the USA, but grew up in Italy and Germany before returning to the US for college.  Bikes are a way of life in much of Europe, so it’s no surprise that I didn’t “outgrow” bikes like many of my American colleagues when I hit my late teens.  I played stick and ball sports growing up, but kept coming back to bikes.  I worked in bike shops through high school and college, and for one summer, I worked for K2 as a bike sales rep in Germany, promoting the ProFlex brand they had just acquired.  I’d probably be pinned as the bike nerd by most of my ride crew, and I really nerd out on suspension setup…I love figuring that stuff out and helping others do the same.

My saint-of-a-wife tolerates my youthful pursuit of mountain biking and the MTB influence seems to have rubbed off on our children – last summer all four of our kids spent a week “sending it” at Killington Bike Park in Vermont and sessioning some days at Thunder Mountain Bike Park in Charlemont, Massachusetts.

Which bikes are currently hanging in your garage?  Do you have a favorite?

Good question!  My interests run the gamut – and I’m blessed to have choices for what to ride on any given day.  In the stable currently I have a Chromag Doctahawk – it’s a 180mm mullet hardtail with a 62 degree head angle…looks weird but goes fast and climbs like a bike that long and slack has no business doing.  At the other end, a Pivot LES fully-rigid singlespeed.  That’s a fun bike on my local XC trails, and it’s one of the bikes I brought with me to ride the Santos and Alafia trail systems in Florida recently.  My newest rig is an Evil Chamois Hagar gravel bike…I’ve been racking up the miles on that and I have plans to do a couple of bikepacking trips with it this summer.  So I guess you could say I’ve got a soft spot for hardtails.

On the full-suspension end, I’m riding a Pivot Firebird 29 and a Deviate Highlander – one of the new crop of high-pivot bikes.  The Highlander has been a pleasant surprise – it’s none of the bad things the reviewers have said about high-pivot bikes, and it’s one of those bikes that “punches above its weight”, meaning I’m doing things on this bike that I do on my Firebird, or even my old Yeti SB150 and Evil Wreckoning.  The Firebird 29 is special to me because it’s the bike I’d take anywhere in the world to ride places unknown…that bike is telepathic, predictable, stable…when I’m on it, I know what it’s going to do, and it knows what I’m going to do, and wherever we’re going, we always seem to arrive early!

Picking a favorite has always been difficult, since each of these bikes were built to achieve different objectives.  If I had to pick though, the singlespeed probably has the highest fun factor and is the most rewarding for me.  It’s also made me a better rider – I have to do all the work – picking the right lines, deciding when to stand and mash and when to preserve energy, and a fully-rigid singlespeed requires more of my body to be involved in the ride – knees and elbows for absorbing shock, hips and shoulders for moving the bike around…and all that translates well back to the other bikes.  My guess is people who own singlespeed MTBs and are reading this know what I’m talking about. 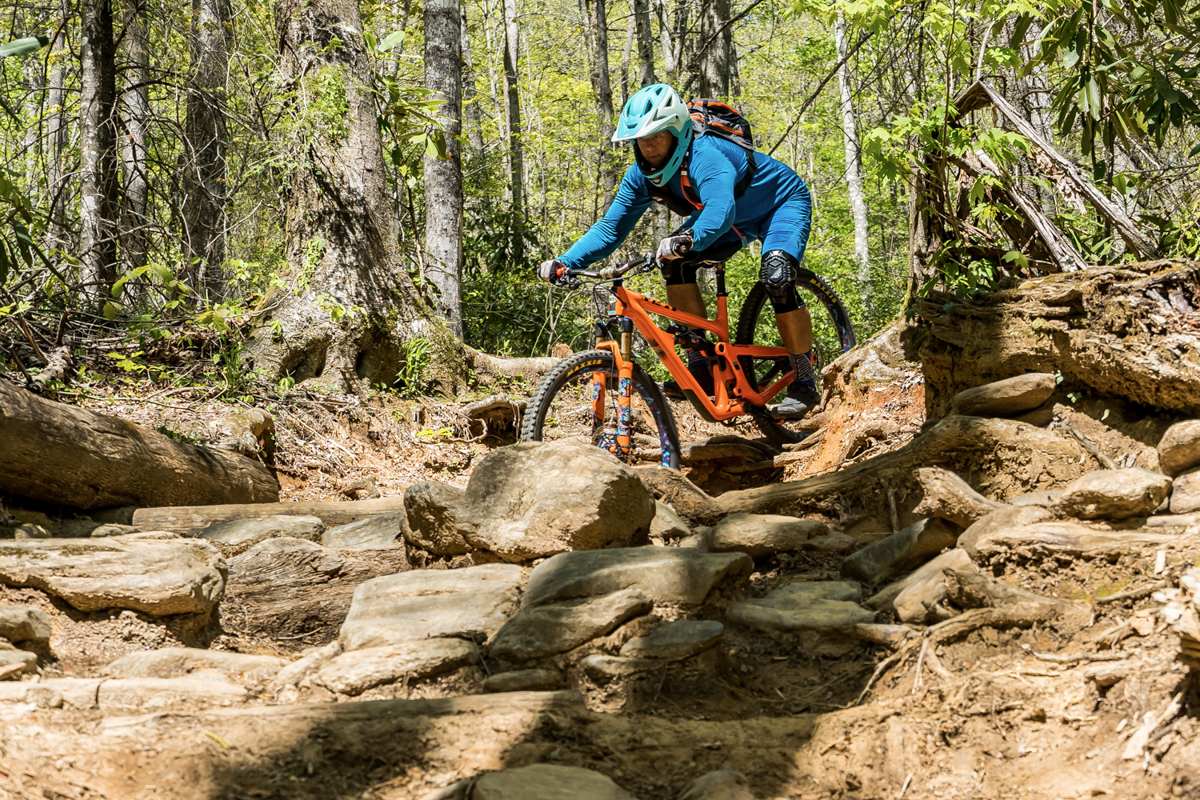 Of the Chasing Epic trips you’ve done so far, what’s been your favorite day on the bike?

That’s a tough one, because Steve sets a high standard for trail selection to begin with, and I continue to be surprised, and challenged, by what he serves up on these trips.  Of the three Chasing Epic trips (Moab ’17, Brevard ’19, Crested Butte ’20) I’ve done, my favorite single day on the bike was Agate Creek on the September 2020 trip we took with Brian Kennedy from the BKXC YouTube channel.  We spent a huge day on the bike, and it had everything – beautiful weather, postcard-perfect vistas as we rounded every switchback, challenging climbs (I’m not a climber, ask anyone), and amazing descents that call on all of your skills and experience to descend.

While all that was going on, we helped a rider in our group who was cramping up, we sourced and filtered water into our packs from the multiple springs we passed by, worked through one or two trailside mechanicals and must have navigated no less than 20 creek crossings.  That day on Agate Creek reset my definition for what an “epic ride” is.

Bucket list places I’ve been and would love to go back to are the Sunshine Coast and Squamish in British Columbia, and the ride zones around St. George, Utah.  There’s just so much to ride in those places, and never enough time.  Places I still need to visit include Park City, Utah, Boise, Idaho, Sedona, Arizona and Revelstoke, BC.  Abroad, I’ve got New Zealand and lift-assisted big days in the Alps and Dolomites on my mind. 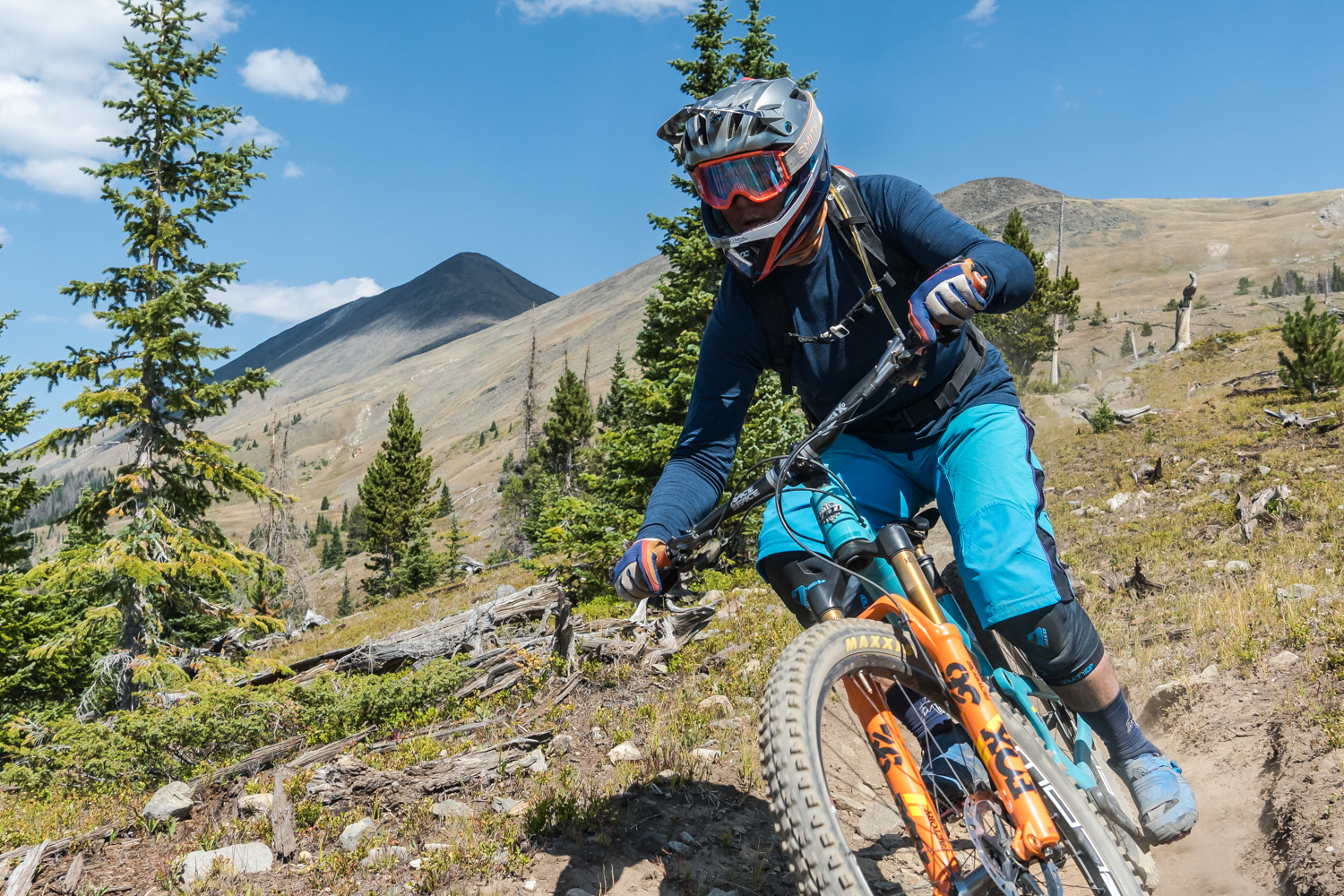 What’s your favorite thing about a Chasing Epic trip?

If I have to pick a favorite, it is that it’s all-inclusive.  From the time I arrive to the time I depart, I know I am in capable hands and don’t have to worry about any of the logistics involved: the awesome latest-model bikes, accommodations, food transportation and expert guiding are all taken care of.  Because of that, I can slow down and enjoy the Chasing Epic experience as it unfolds, and get to know the people with whom I’ll spend the next few days riding spectacular trails.  I’ve been on three trips – in aggregate that’s maybe ~50 or so riders and guides – whom I would not have met otherwise and not have this shared experience.

When your lungs are searing from the last climb of the day someone you just met yesterday drops back to pace you up, you never forget that.  When the guide says, “Hey Ryan, drop in behind me and follow my line, you’re going to like this” as we prepare to drop into a rowdy descent, that’s an awesome feeling.  For me, these trips have been as much about riding as they have been about connecting with myself, connecting with the world around me, and connecting with people.

If there was one thing you could tell a mountain biker who has never done a Chasing Epic trip, what would it be?

This will either come off as a cliche, or a worn out marketing pitch (or both), but if they were contemplating a guided MTB trip, I’d tell them that “there are guided trips, and then there’s Chasing Epic.”  In my opinion, which is informed by my own experience and periodic research and talking to others, for the reasons mentioned above, there isn’t a better value right now in the US guided mountain bike tour market than what Steve offers with Chasing Epic trips.

Oh, and the photos!  I haven’t even mentioned the photos!  I doubt he would tell people this himself, but I came to learn that Steve was a photojournalist for the outdoor industry before everyone with an iPhone was a “photographer.”  This has translated to amazing images of me doing my favorite thing in cool places – photos I am proud to show my family and friends and, importantly, photos that communicate just how chunky or steep some sections of trail really are.