Our Favorite Photos of 2020

Our Favorite Photos of 2020 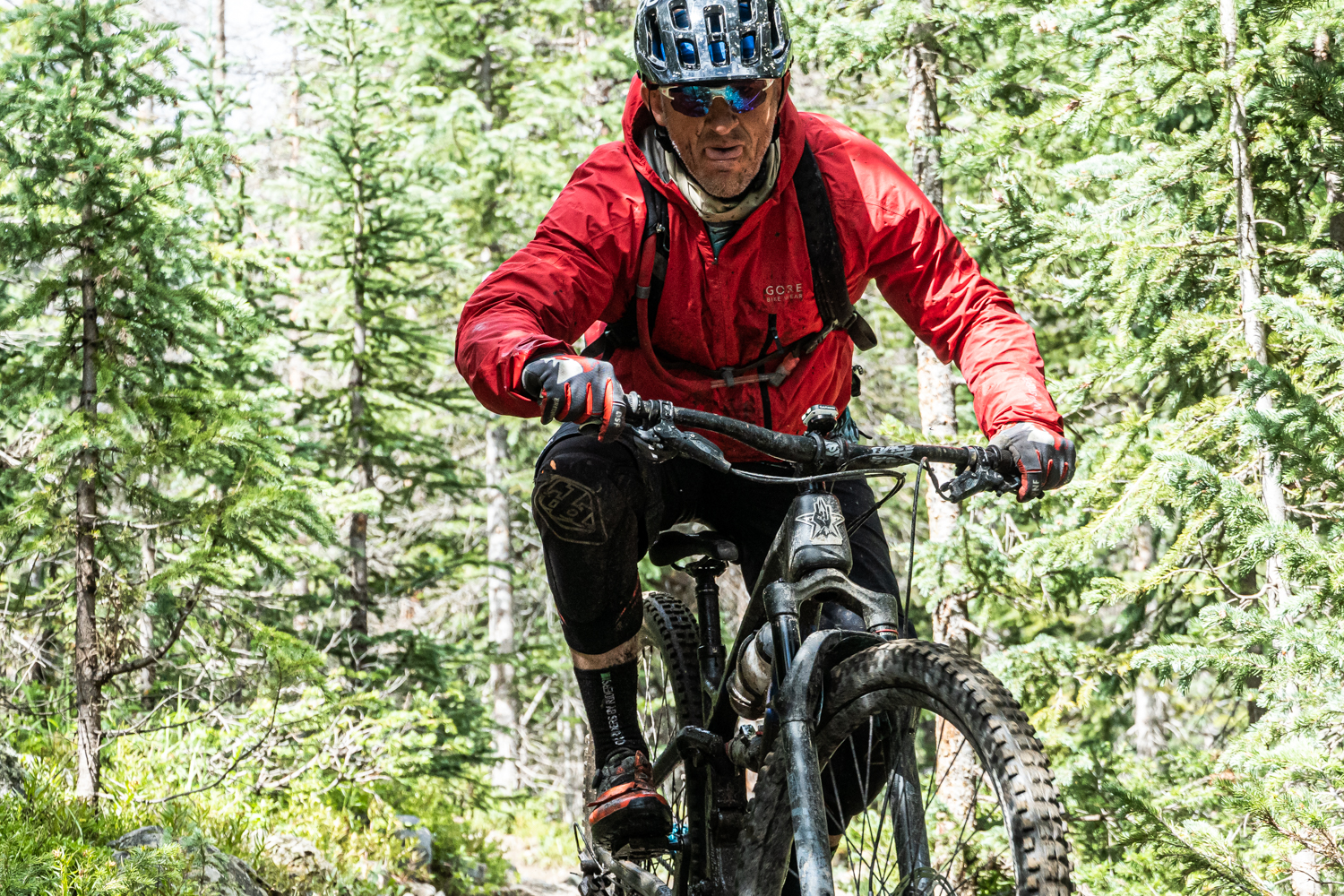 Although it was a short, sweet 2020 trip season we still managed to put together some amazing itineraries for our clients.  We try to capture images from each trip we run, and below are our favorites in the order they happened… with a little description to go along with each one. 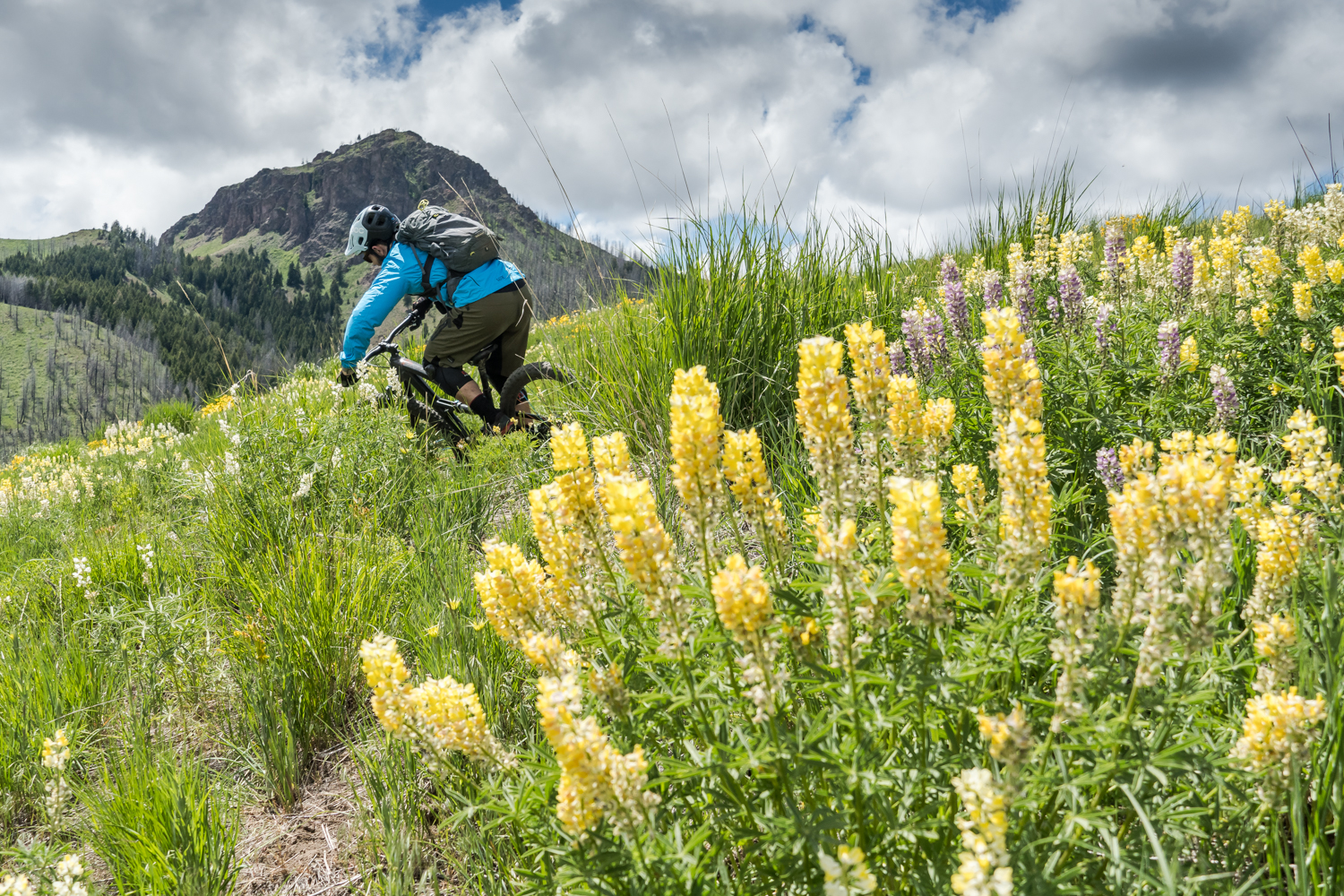 Sun Valley (June): Unfortunately we had to cancel both June trips last year due to CoVid restrictions, so we weren’t able to show our clients the goods in the Wood River Valley in 2020.  That said, we did make it on a recon mission and managed to scout out some new trails and ride combinations.  The wildflowers were absolutely exploding thanks to a great snow year, and we had perfect conditions.  We can’t wait to get back there this June for some BIG rides and new routes! 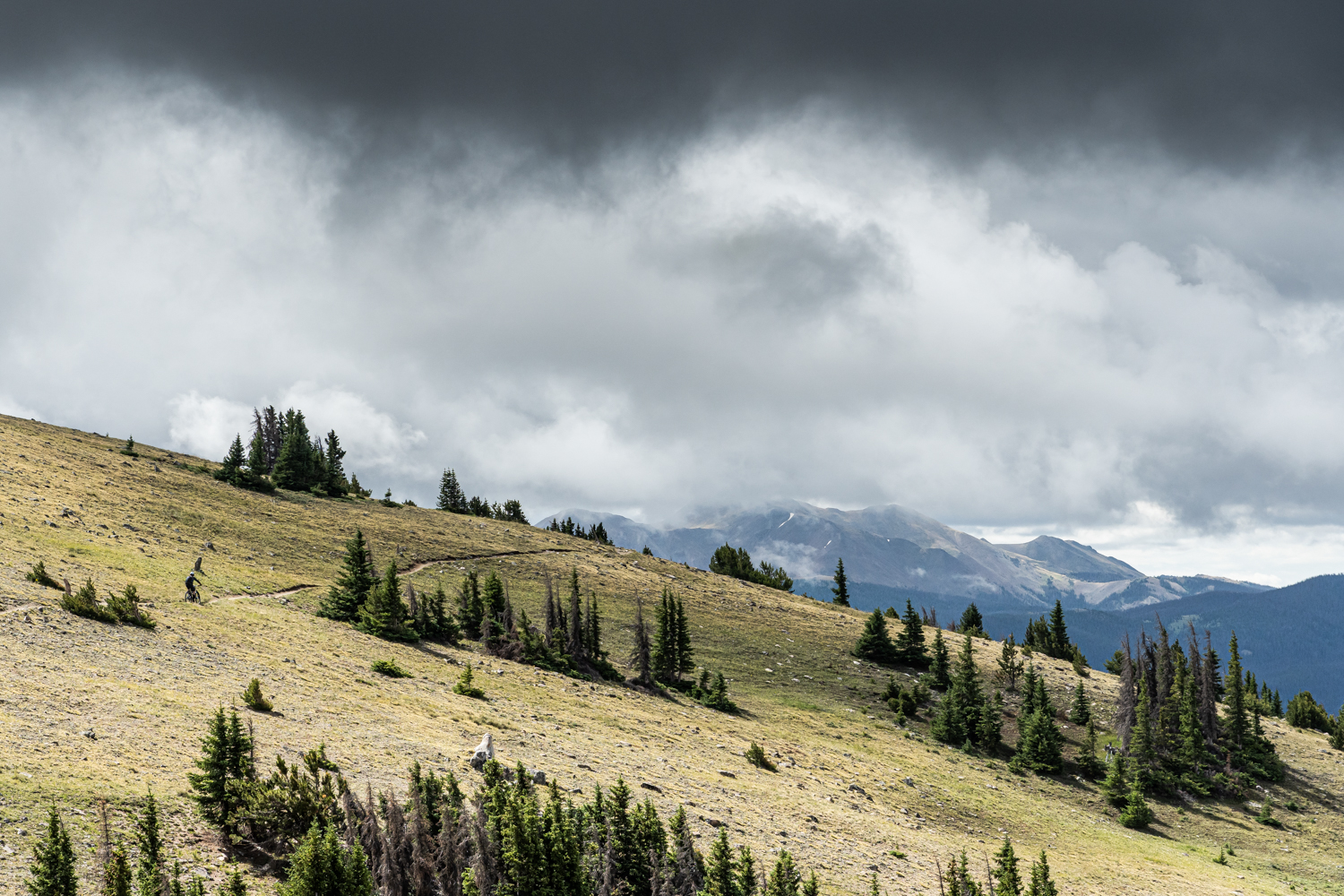 Monarch Crest Enduro (July): This was the first trip we were able to run in 2020, and we weren’t sure how the weather was going to hold up.  Rain was in the forecast every day, but other than getting turned around at 12,000 feet on our Canyon Creek day due to sleet and near-freezing temps, the conditions were epic.  This was a pretty normal scene as we climbed up the Monarch Crest Trail from the pass, with low-lying clouds and gloomy mornings.

Monarch Crest (July):  The intensity and concentration is awesome here; this is also a nod to Sean R. for the performance of the year.  About two miles into the Fooses Creek descent, he managed to rip the rear derailleur off thanks to an unfortunate collision with a  big rock.  After removing the chain, securing the cables and tuning the Trail Pistol into a glorified Strider bike, he managed to keep up with the group with an awesome effort of skill and “Fred Flintstoning” down the last 6+ miles.  It was truly a sight to see. 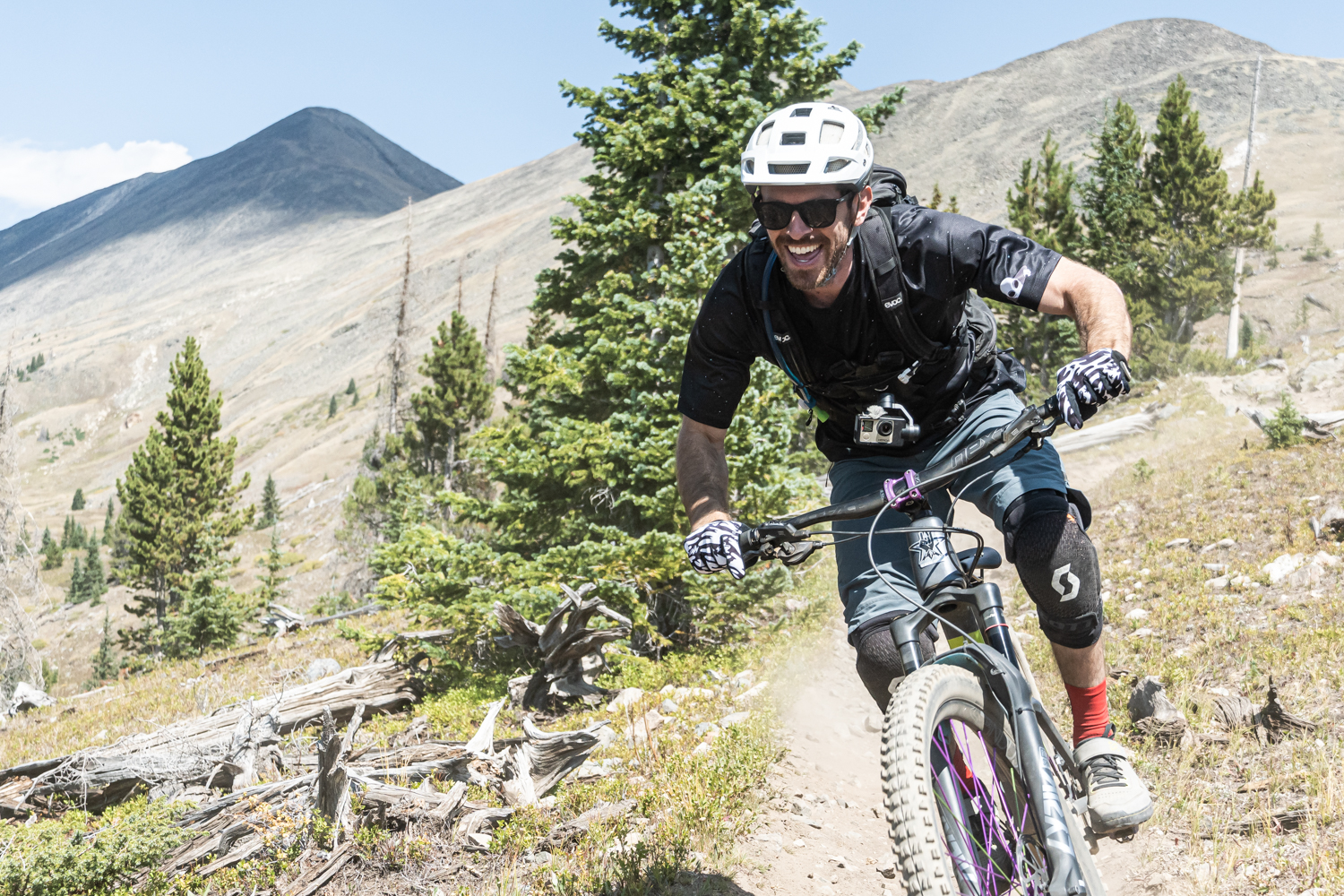 Crested Butte Enduro (September): Although based in Crested Butte, this shot was actually taken on Agate Creek off the Monarch Crest.  We put together a special shuttle-based itinerary with BKXC, and this was day two of that trip.  On the shuttle up to the pass that morning, Brian’s front brake hose was pulled off his bike so he’s seen here riding my personal Guerrilla Gravity Trail Pistol, and having a damn good timing doing it.  The conditions were loose and dry, but two days later we ended up getting 18″ of snow in this exact spot! 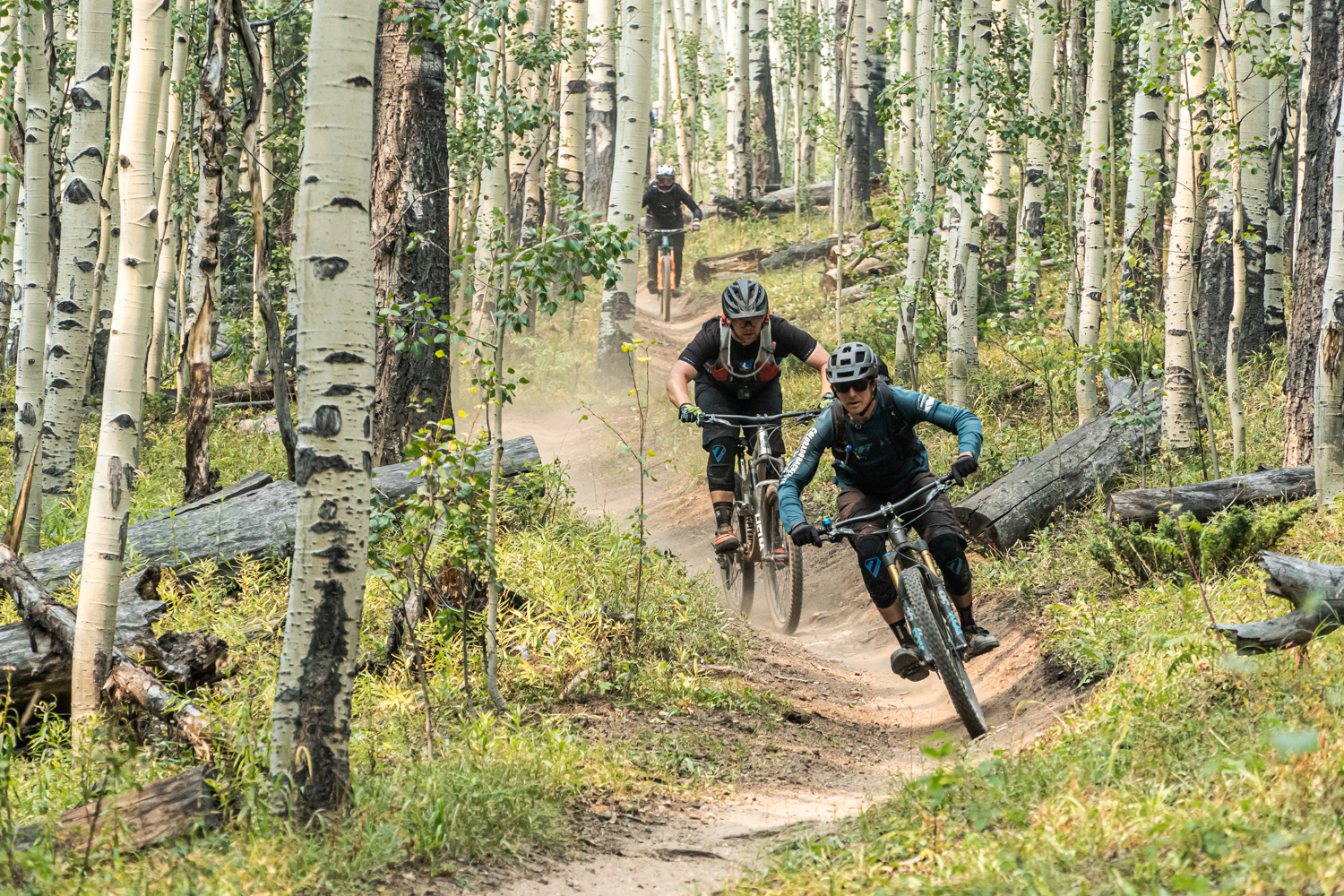 Crested Butte Enduro (September): One of my favorite things when shooting pictures during a trip is getting close to the trail and listening to riders fly by; these three sounded like a freight train.  This is the “Jedi Woods” section of Doctor Park, one of the best stretches of singletrack anywhere in the world.  Ben (our lead guide in CB), Cole, and Ryan were absolutely ripping it that day. 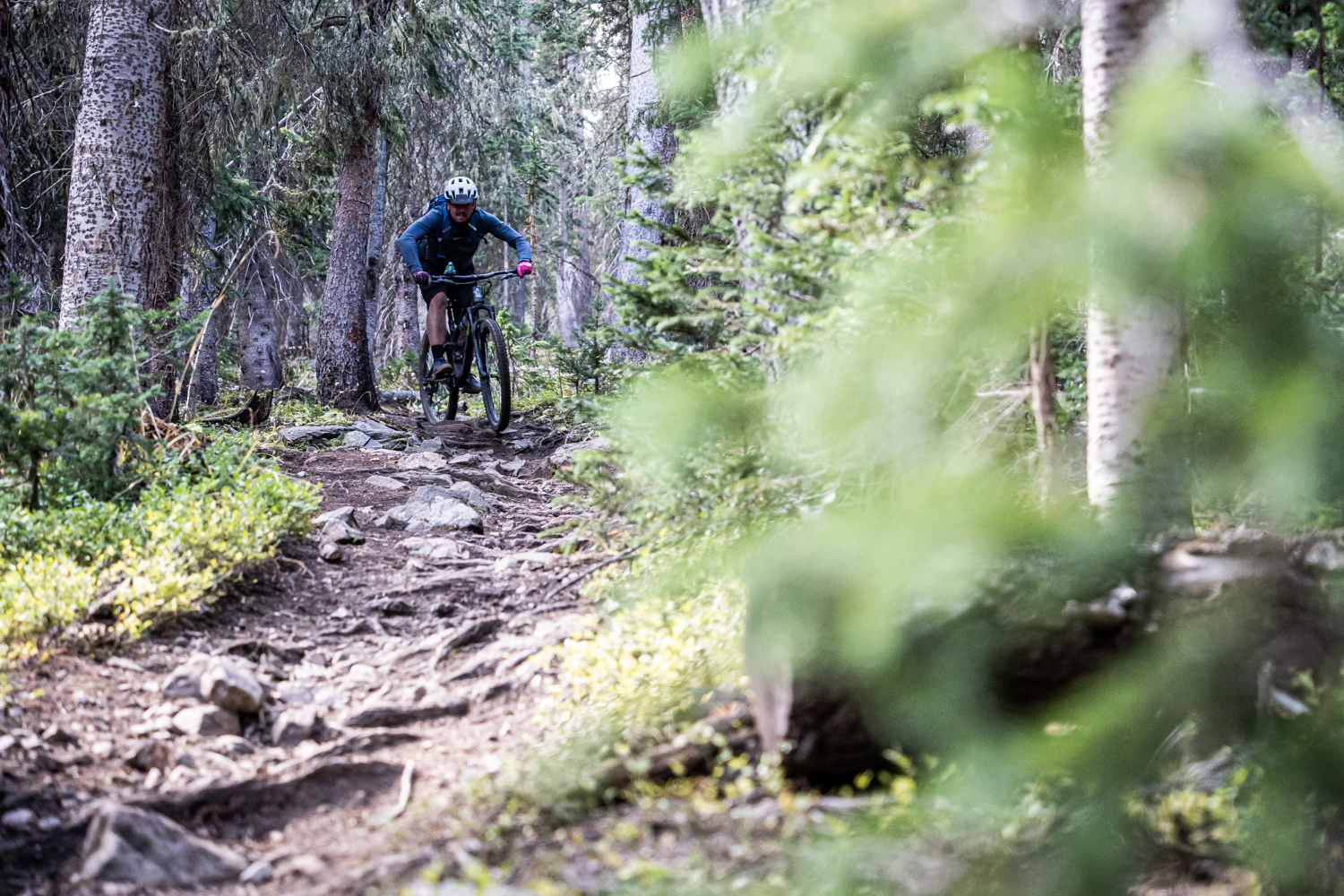 Monarch Crest Enduro (September): Ah Greens Creek… 8 miles of tech, rowdiness, flow, and gnar all packaged into one amazing trail.  This shot of Jim shows just what you can expect on the first half of our “double shuttle” day, which combines Greens Creek in the morning with Fooses Creek in the afternoon.  All told you’re looking at ~30 miles with 8,000 feet of amazing downhill. 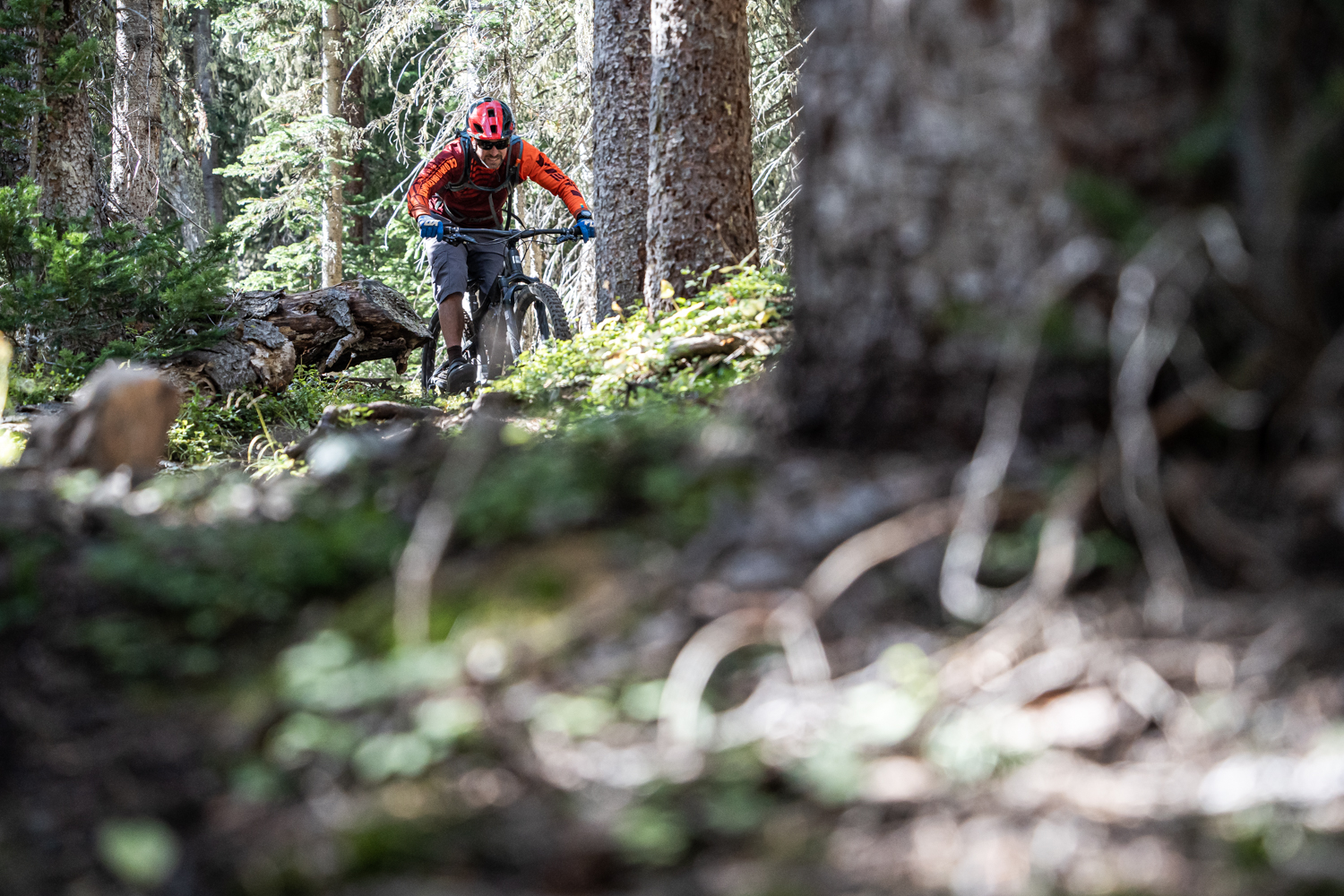 Monarch Crest Enduro (September): And here’s one from Fooses Creek, just a personal favorite with the out of focus roots in the foreground and a rippin’ rider flying downhill.  We originally planned to have the Monarch Crest Enduro be a one-time Wildcard trip, but it’s been so popular that it’s here to stay. 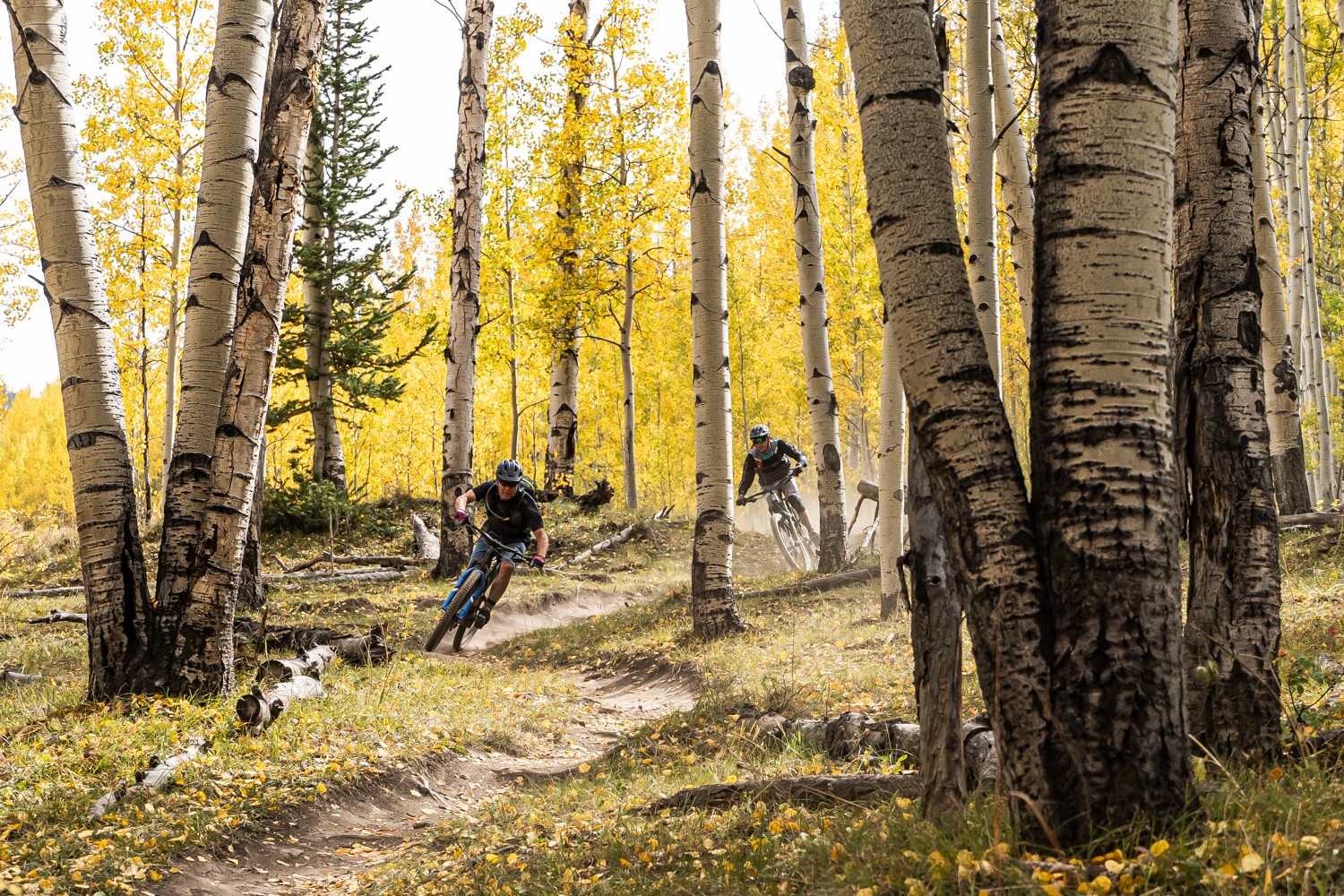 Crested Butte (September): Sometimes you just get lucky with the timing.  This shot was taken on Strand Hill, one of my personal favorite trails and typically the second portion of a big day combining with Teocalli Ridge.  We had absolutely perfect weather for the whole trip, and the aspens were as good as it gets on Strand that day.  Joe (front) and Peter (rear) are good friends from Napa, and they nailed the spacing on this one. 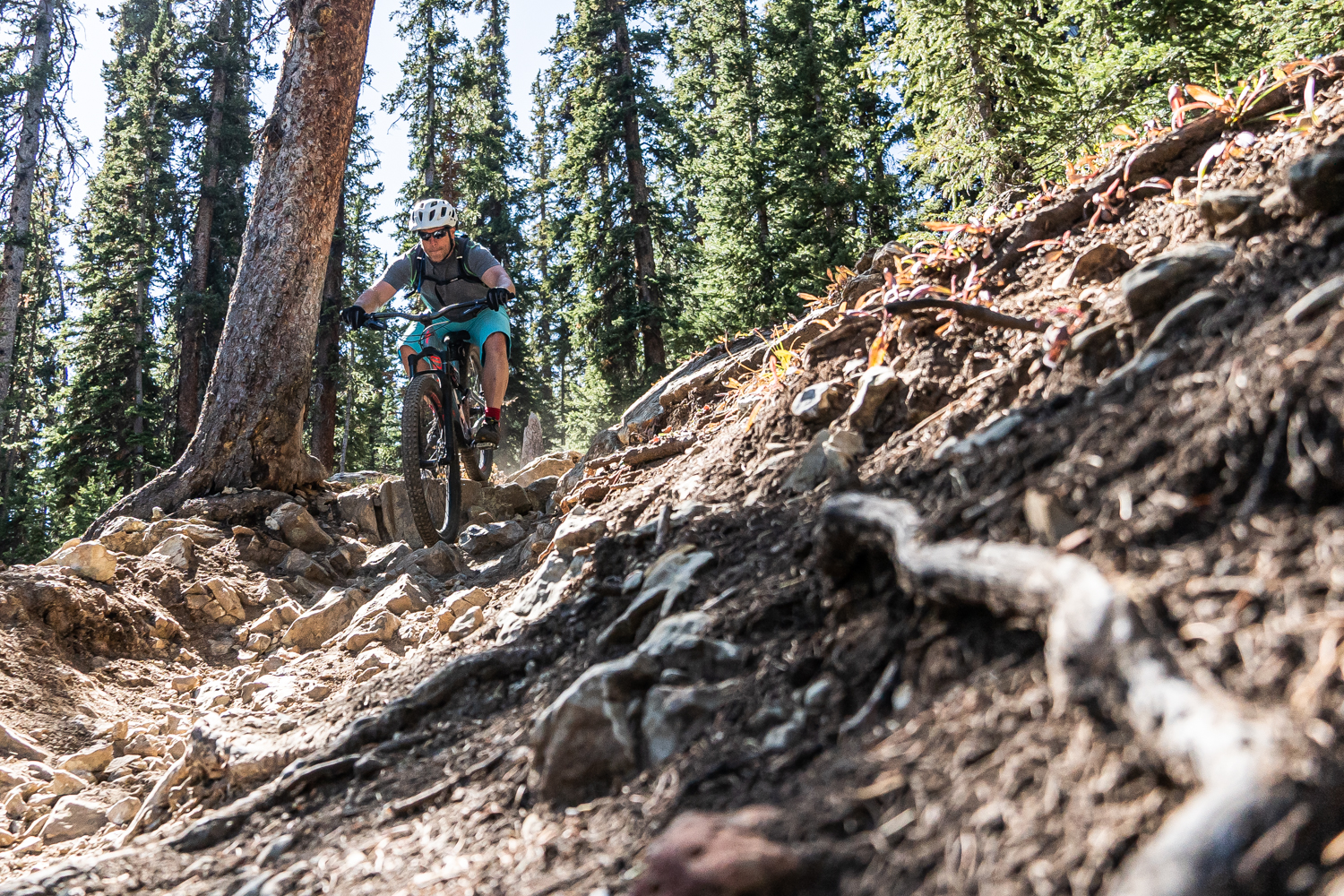 Crested Butte (September): To me, this picture is all about the progression.  Just because it’s a “high country epic” doesn’t mean we don’t get into some rowdy riding in Crested Butte!  This day we got a special shuttle and then climbed up to 11,600 feet and were able to ride a few trails we typically don’t on our trips, including the Cement Mountain Trail seen here.  This section was super gnarly (it’s waaay steeper than it looks), and not everyone wanted to ride the steep rocks- but Chad stepped out of his comfort zone and rode it like a pro. 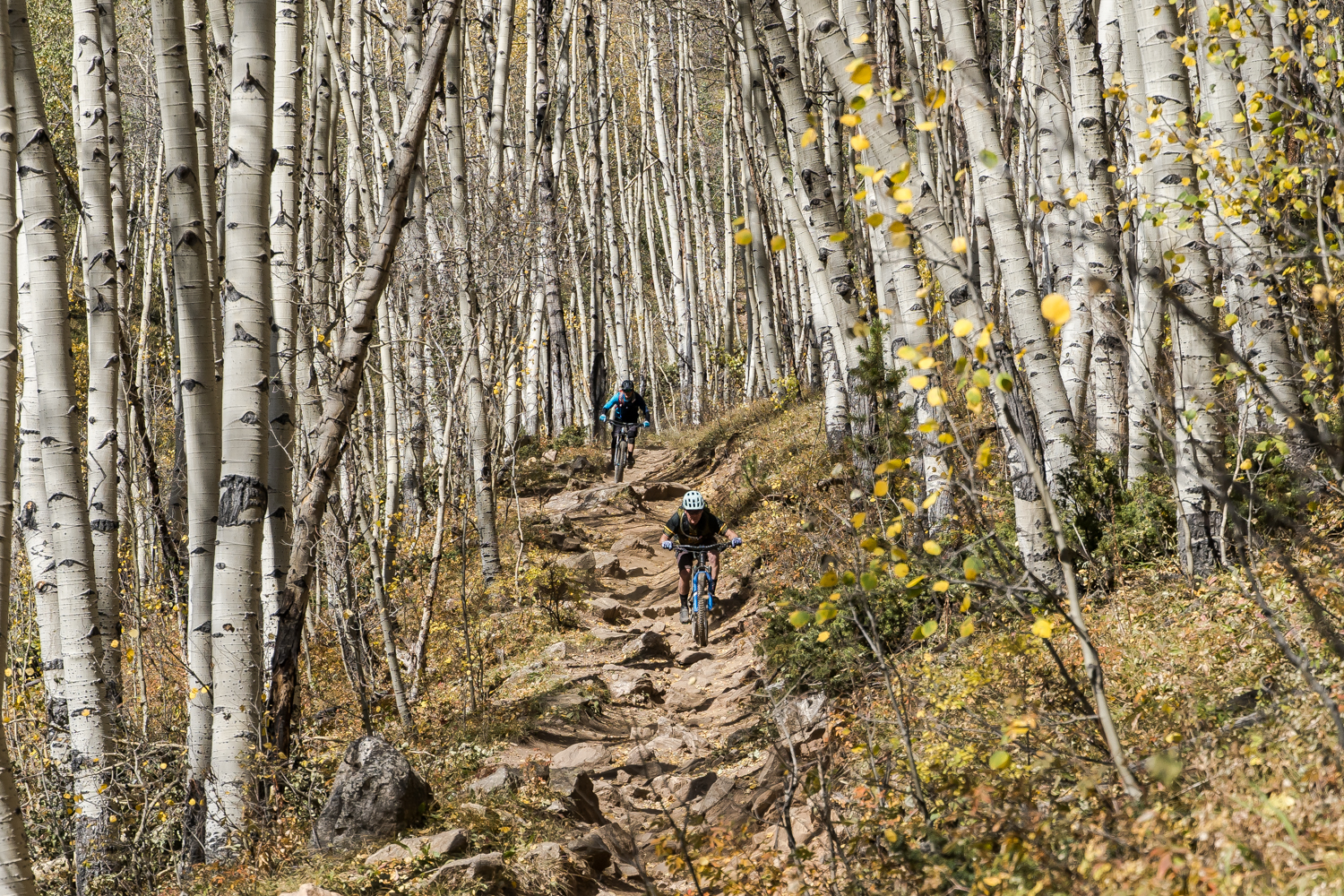 Crested Butte (September): Joe and Peter, back at it again in Crested Butte!  This shot is from the rocky technical stretch of Doctor Park about 2 miles in, just before Jedi Woods.  This last gasp of steep rock riding pushes your limits if you ride it fast, which these guys most certainly were doing.  The aspens were just about peak for this ride too, which makes Doctor Park an unforgettable experience. 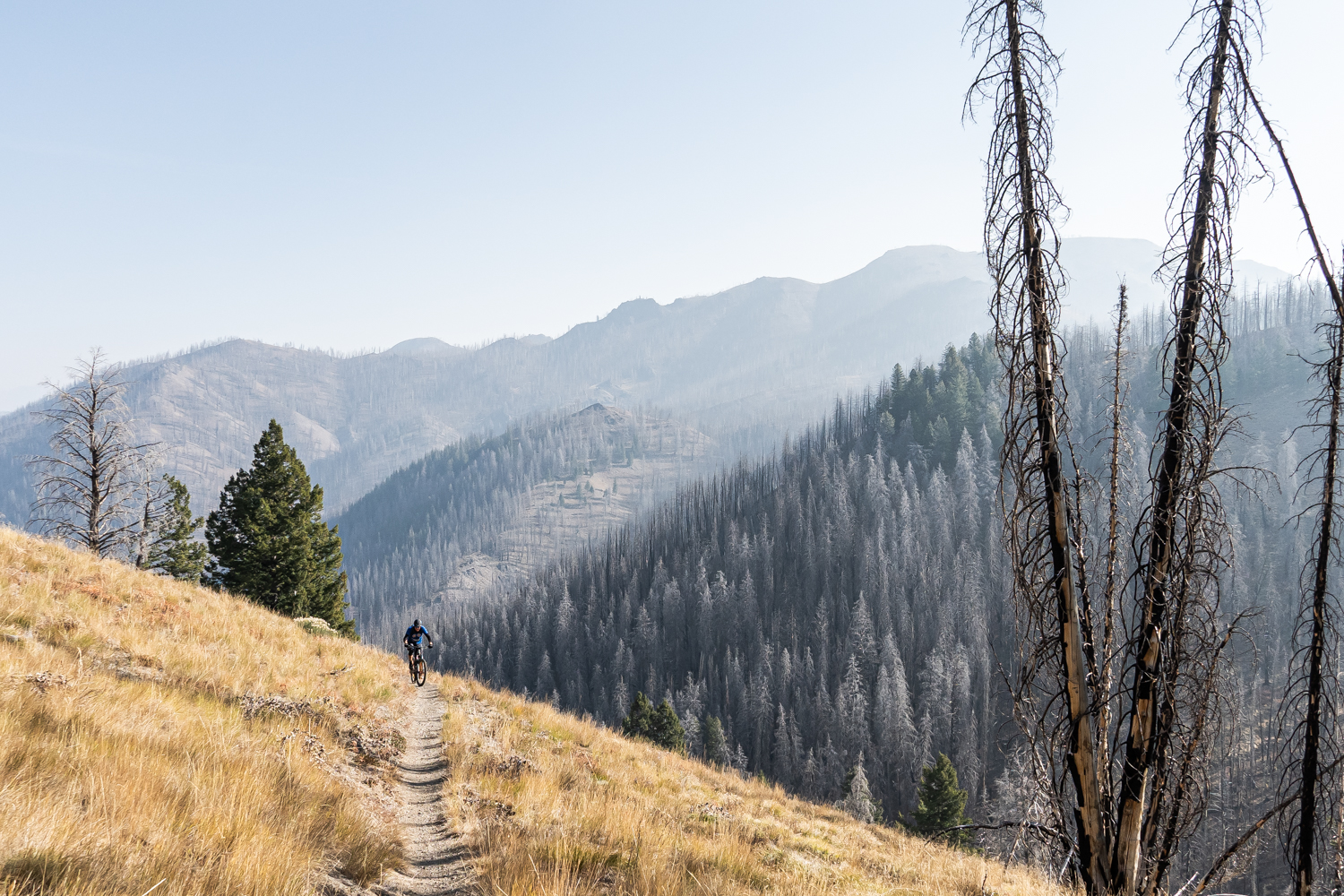 Sun Valley (October): After having to cancel our June trips to Sun Valley, we were able to get back up there in early October with a small group for some fall riding.  The weather was perfect, albeit a little weird each morning.  While it was cold in town (20s and 30s), by the time we took the shuttle up to 8,000 feet to start our ride, it was 60+ and sunny.  You can almost see the cold air back behind Rei in this shot, as we climbed up Osberg Ridge for a big 25 mile day. 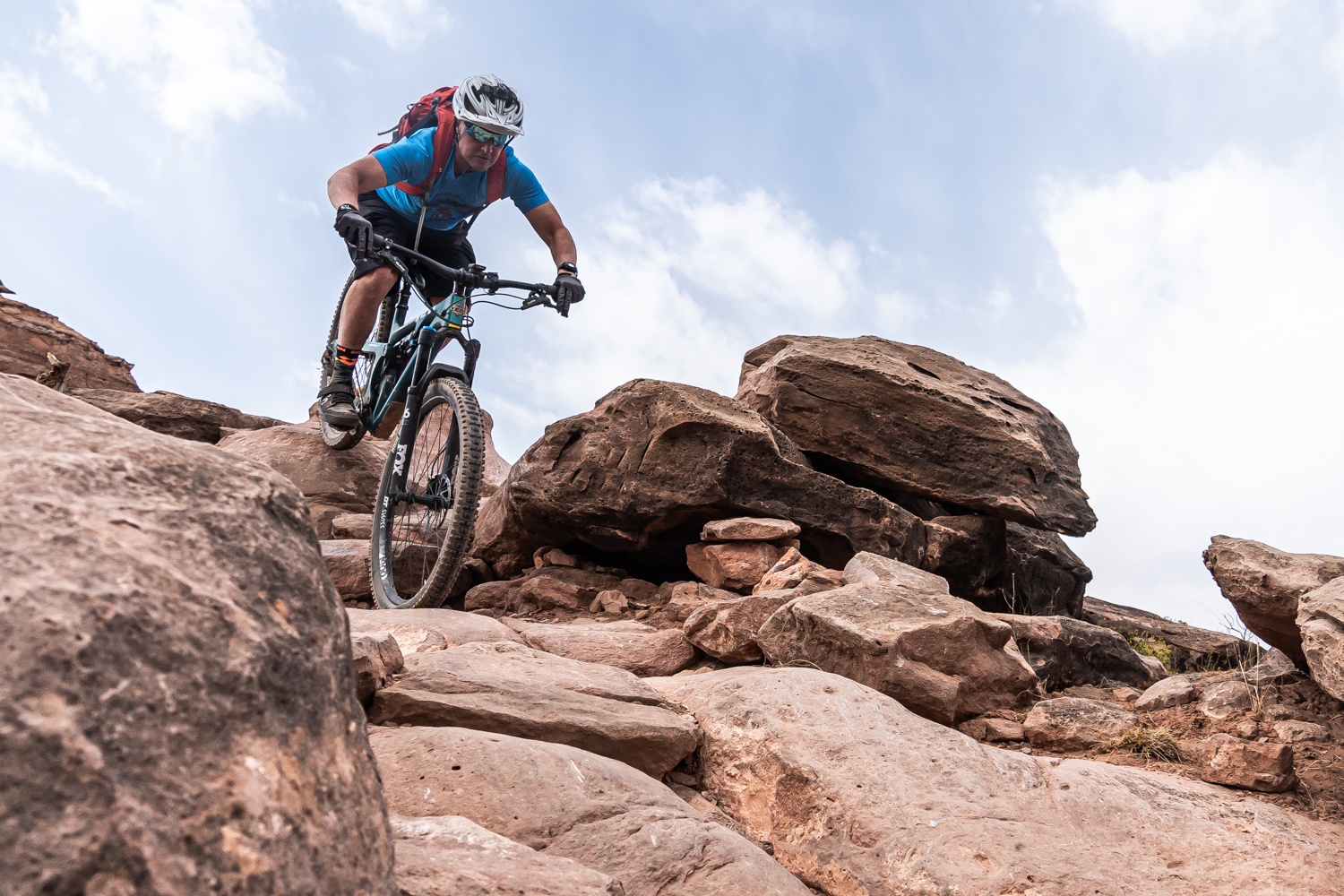 Moab (October): It’s pretty obvious where this photo was taken, as the steep red rocks are a dead giveaway.  In mid-October we partnered with the crew at Worldwide Cyclery to kick off the first of many partner trips, this one to Moab.  On the first full day we hit Captain Ahab and Jackson’s, and this feature is well-known about three minutes into Lower Ahab: if you can ride this one clean, you’re in good shape.  I love the intense look on Steve’s face here as he crushes this line with ease. 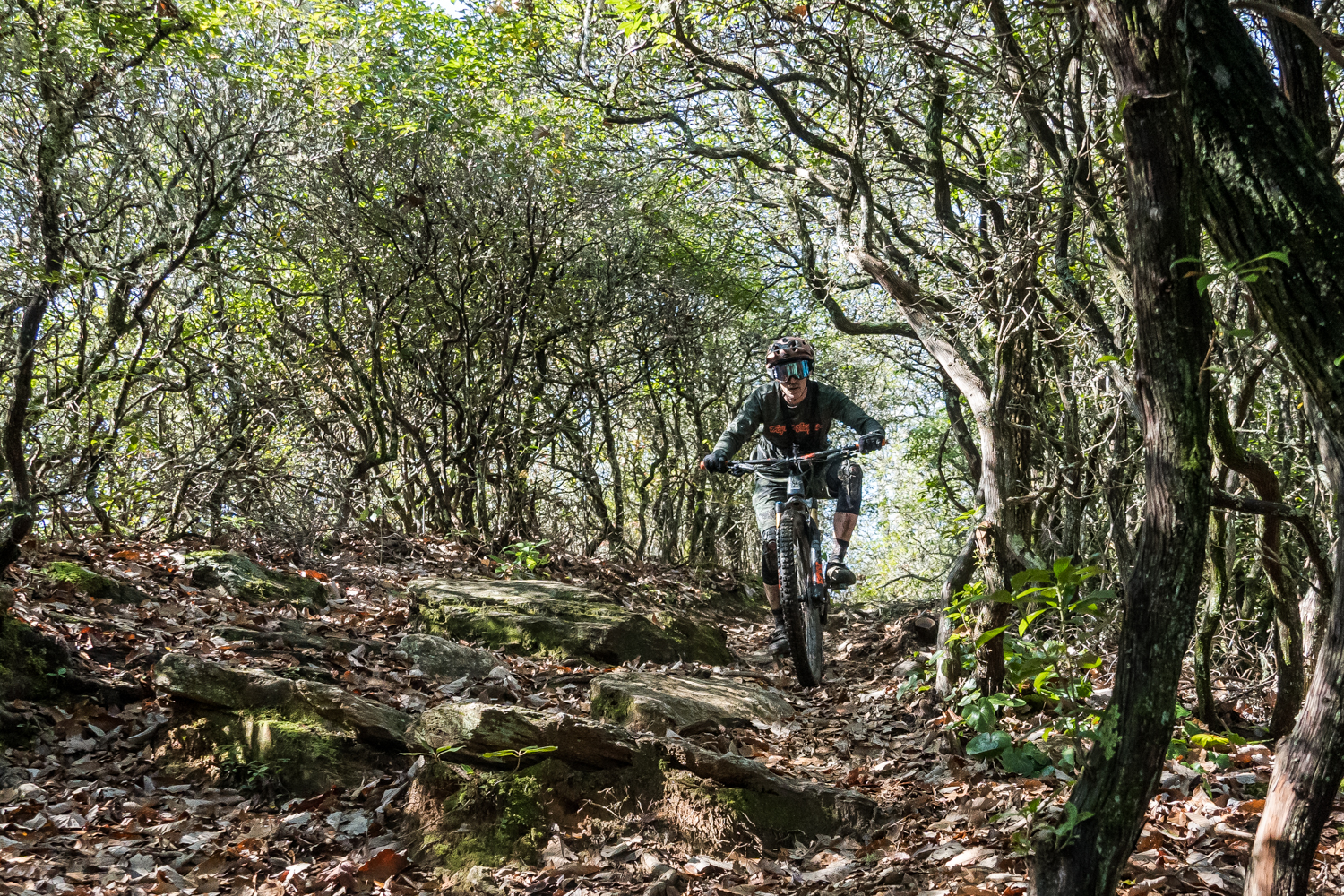 Brevard (October): Our last trip of the year was a good one, hosting an awesome crew of riders in Brevard for some rowdy riding in Pisgah and Dupont.  This shot was from Day 3 of the trip, where we combined Avery Creek, Bennett Gap and Middle Black for some absolutely incredible Pisgah tech.  It had rained a little that morning which made the rocks slick, but tamped down the leaves… and created some all-time riding conditions.  Here’s Seth flying through a Rhododendron tunnel on Bennett Gap, just below the lookout up top.