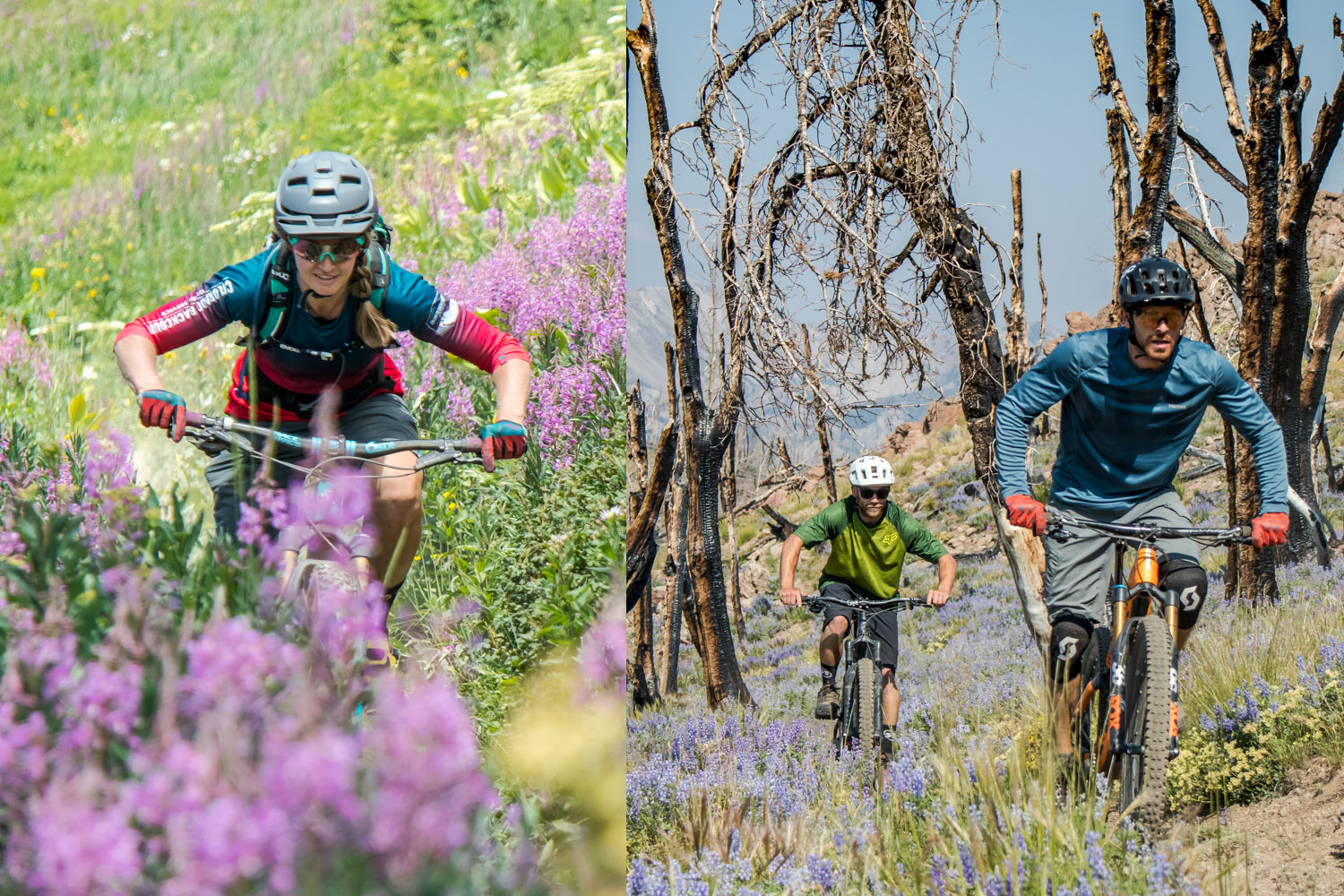 It’s time to move our Face-Off Series to the higher elevations, and compare our two most popular high-country destinations: Crested Butte and Sun Valley.  We’ll get this out of the way early: to us, there’s no wrong answer here.  Not only are these spots our most popular destinations, but they’re two of the best mountain destinations in the lower 48.  It’s tough to beat riding singletrack high in the mountains with unreal views, amazing trails, and miles-long descents with a group of friends.

So, what separates these two destinations?  To us, there are minor differences in a variety of different areas that could potentially sway you to favor one spot over the other.  But make no mistake, if you’re looking for BIG rides in the mountains where you won’t see more than a few people all day long, you’ve got two pretty awesome choices here. 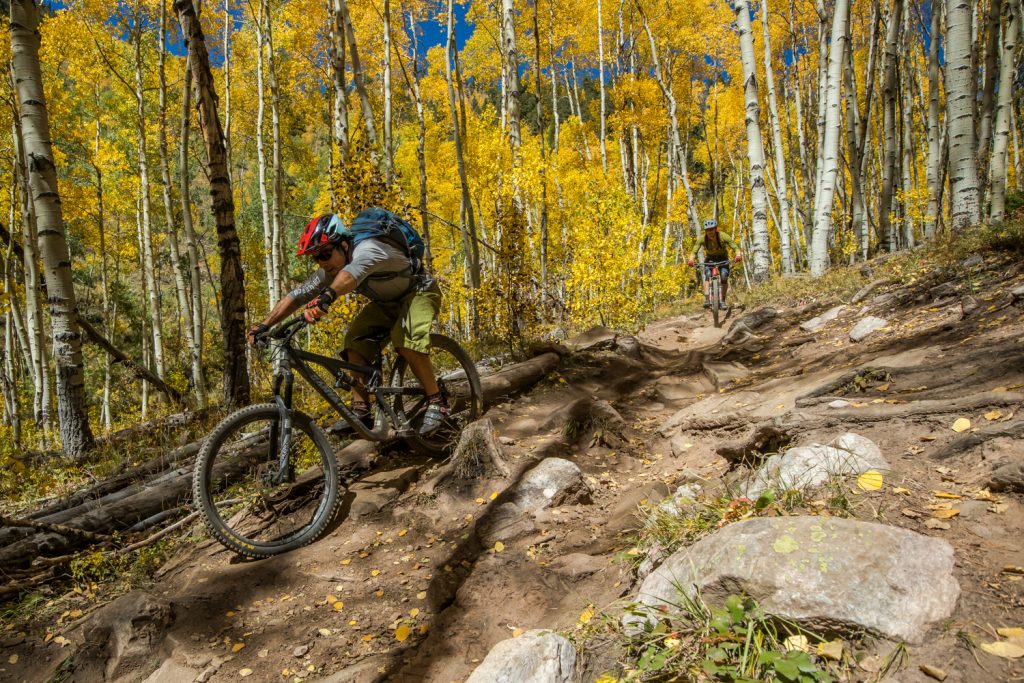 OK, let’s get things started.  To the casual observer, Crested Butte and Sun Valley seem very similar when you look at the terrain and the trail options.  Both of these spots offer the potential for huge backcountry-type riding (think 25+ miles and 4000 feet of climbing), and don’t worry, we’ll take advantage of that on each Chasing Epic trip.  The climbs can be huge, but the 6+ mile descents are totally worth the suffering.

To us, Crested Butte is a bit more technical and “rowdy” than Sun Valley.  You’ve got descents like Doctor Park and Teocalli, where there are sections of rock and root that you won’t see anywhere around Ketchum.  Throw in an occasional day at Hartman Rocks, and Crested Butte definitely gets pushed up into the “intermediate plus” level of technical difficulty.

Sun Valley on the other hand, leans towards the “XC” side of trail riding.  Sure, there are short sections of rock here and there, but a large majority of the trails we’ll ride are fast and flowy, and a medium-travel bike is more than enough.  Don’t get us wrong though, it’s still fun as shit and we can’t stop smiling after a long ride in the mountains above town. 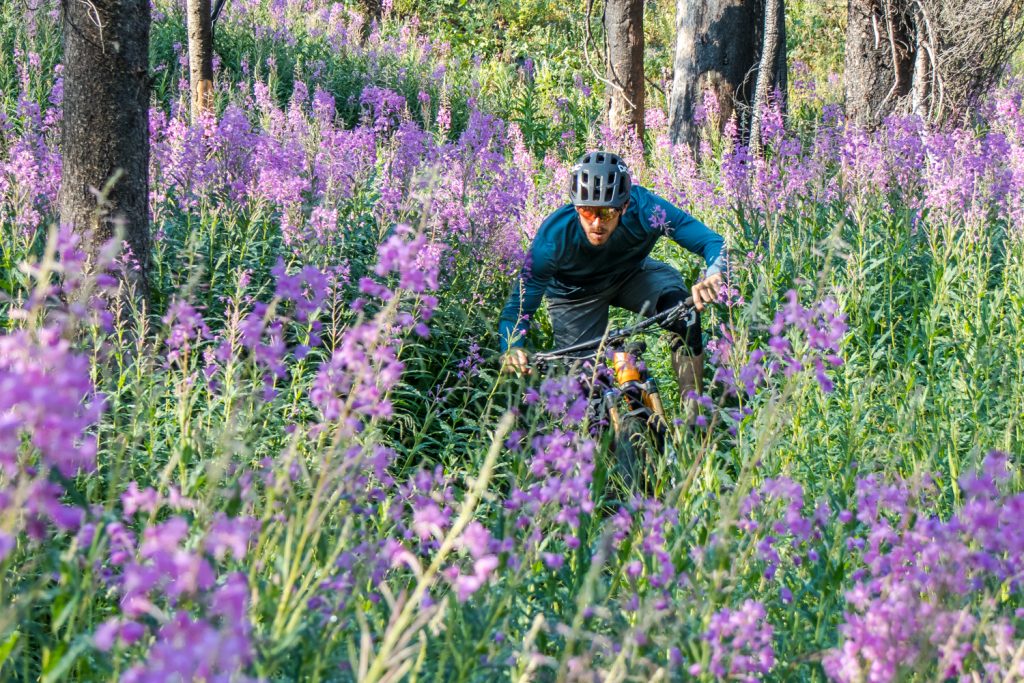 Here’s where the subtle differences can be seen more as personal preferences.  Although Sun Valley’s riding season tends to be a little bit longer, both are absolutely ideal from early summer through late fall.  Our favorite time to ride each spot though?  We’ll go with early summer (mid-June) in Sun Valley and fall (late September) for Crested Butte.

The riding season in Sun Valley goes from early June to mid-October most years, dependent on the previous winter’s snow of course.  In June you’ll find lush mountainsides full of wildflowers, perfect trails, and green as far as the eye can see.  Temps should hover in the mid-70’s; combine all of that and it’s ideal for riding.  In the summer (July and August) things can get dry and dusty if it hasn’t rained for a while, which is why we tend to stay away until September.  Once fall hits and temps cool, riding conditions again become damn near perfect.

In Crested Butte, you’ll find amazing riding from early July into early October.  July starts off similar to Sun Valley with lush mountainsides of green and amazing wildflowers, and absolutely perfect riding conditions.  July is Colorado’s monsoon season, so we might have to dodge a thunderstorm or two!  August can get dry and dusty here as well, which is why we tend to wait until September to come back for our second round of trips.  Once fall hits in Crested Butte, things turn magical… riding through golden aspens with cooler temps and the occasional flurry- well, that’s just heaven to us. 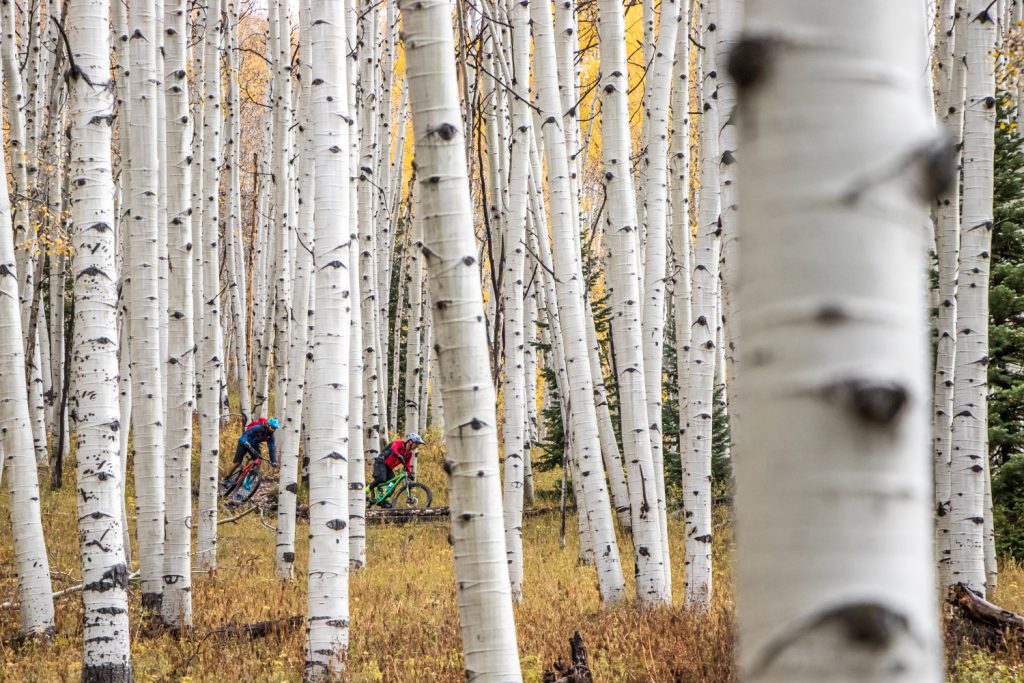 Which ride defines each area?  In Sun Valley, we’ll go with Osberg Ridge.  In Crested Butte it’s a bit more of a toss-up, as we think the 401 Trail is fighting with Doctor Park for top spot.  In terms of overall popularity and reputation from our past Chasing Epic trips, we’re choosing Doctor Park.

So, what’s Osberg Ridge all about?  The ride starts with a shuttle to the Baker Creek TH, which sits about 20 minutes north of town.  Once dropped off, we’ve still got quite the climb ahead of us… 5 miles and about 1500-2000 feet!  Don’t worry though, because amazing views and some of the coolest terrain you’ve ever seen will surely distract you from the pain.  Once topped out at about 9500 feet, the fun begins.  The descent is singletrack through a mix of meadows, burnt trees, and wildflowers.  And it seems to go on forever.  On Chasing Epic trips, we’ll typically combine Osberg Ridge with Oregon Gulch, which makes for about 10-12 miles of descending back to where the beer is waiting.  It’s a ride you won’t forget.

Now to Doctor Park in Crested Butte; it’s a classic and is another ride you’ll remember for a long time.  On our trips, Doctor Park is typically the second half of our ride, combined with Flag and Bear Creeks.  However, most folks do this ride on its own as either a shuttle up Spring Creek Road, or as a loop.  If you shuttle up Spring Creek Road, you’ll save 8 miles of dirt road grinding… we recommend it.  Once you cross through Spring Creek, the real pain begins: a 3-mile climb that will have you wondering what the hell is going on.  But again don’t worry- it’s totally worth the pain and suffering.  The glory of Doctor Park lies in the 6+ mile descent that starts at treeline through a meadow, drops into technical switchbacks and rowdy rock gardens, progresses into the “Jedi Woods” section (2 miles of no-brakes-needed aspen cruising, just like the Ewoks on their speeder bikes!) and then finally spits you out into rocky, dry and technical singletrack above the Taylor River.  By the time you’re done with this downhill, your forearms will be pumping and you’ll have a smile on your face three miles wide. 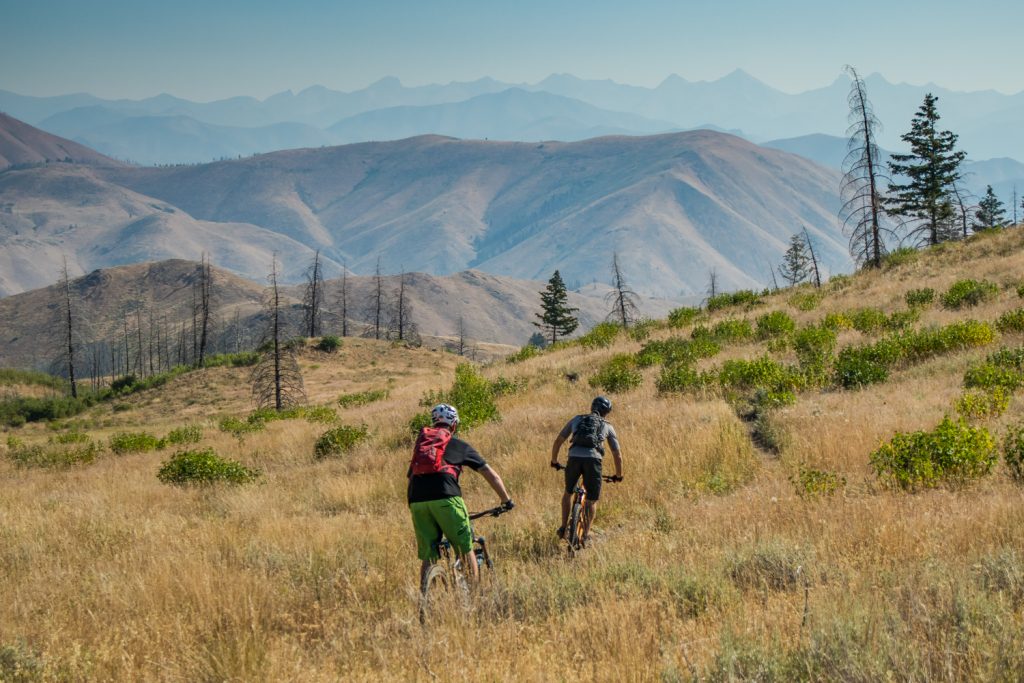 When it comes specifically to mountain biking, Crested Butte has this won hands-down.  But it’s not quite that easy… because both of these small mountain towns kick ass.  Sitting in the middle of huge, beautiful mountain valleys they’re both the type of place you dream of retiring and spending the rest of your days.

Most times, it seems like there are more bikes in Crested Butte than cars.  It’s not unusual to ride through town and see herds of mountain bikers up and down each street, with even the parked cars loaded with multiple mountain bikes.  Elk Ave has plenty of bars and restaurants to keep you happy, and the vibe in town is amazing.  To us, Crested Butte is one of the last real mountain towns in Colorado.  At times it can seem over-run with visitors and shoppers, but there’s still an authenticity about it that has us smiling as soon as we pull into town each time.

Sun Valley is a little different, but still as awesome.  The mountain bike culture isn’t nearly as developed as Crested Butte, but that works in positive ways.  Town never seems busy, and there’s a very relaxing vibe here.  Mountain biking is most certainly a big part of town in the summer and fall, but it’s almost as if things here haven’t been discovered yet- maybe it’s because Sun Valley is kind of in the middle of nowhere.  Town itself is walkable and full of shops and restaurants, and we love just walking around and eventually sitting on a patio with a beer and a burrito after a good long ride.  Both spots are as picturesque as it gets in the Rocky Mountains. 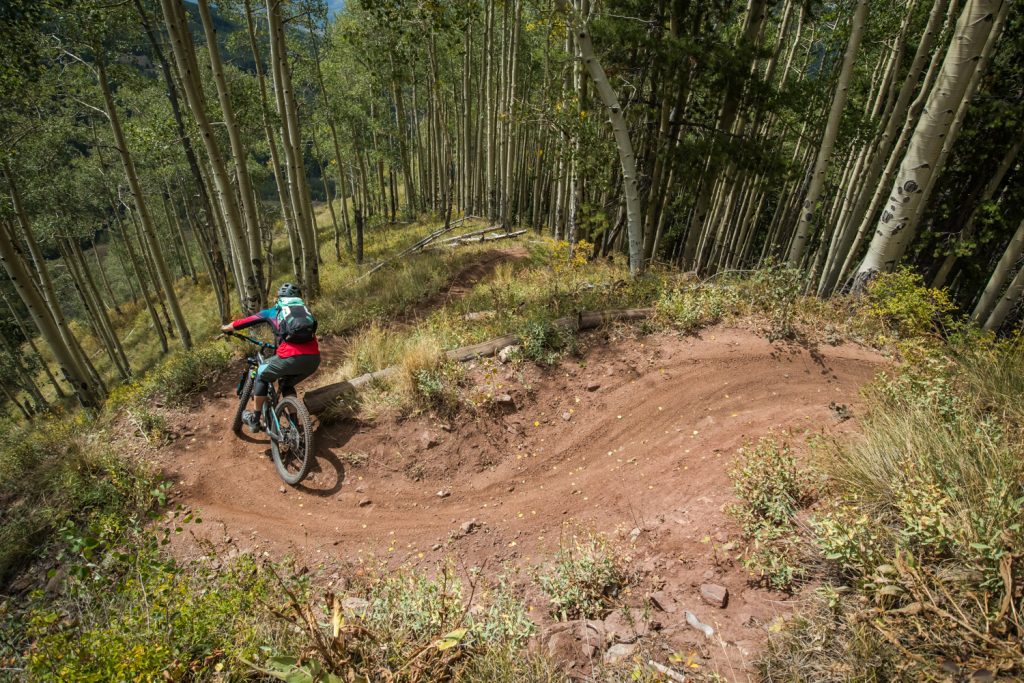 This is where things get difficult. Honestly.  I sit here writing this in Colorado as there’s a mix of rain and snow coming down, and I’m getting excited just thinking about riding in both of these spots.  They’re both nearly impossible to beat.

So to us, it all comes down to when you have the available time to ride… whether that means vacation time or when you can take time away from the family.  Our trips to Sun Valley and Crested Butte are spread out among four different months, with Sun Valley being in June and October, while Crested Butte is July and September.  It’s really as simple as that- if you’re looking to ride in the summer with us, choose between June and July.  Want to ride in the fall once school is back in and you’ve got more flexibility?  Then go with Crested Butte in September or Sun Valley in early October.

Because honestly- you can’t go wrong with either of these spots, and we feel lucky to show you around both of them during any one of our four scheduled trips this year!  Put in the miles though, because we’ve got some BIG rides planned!