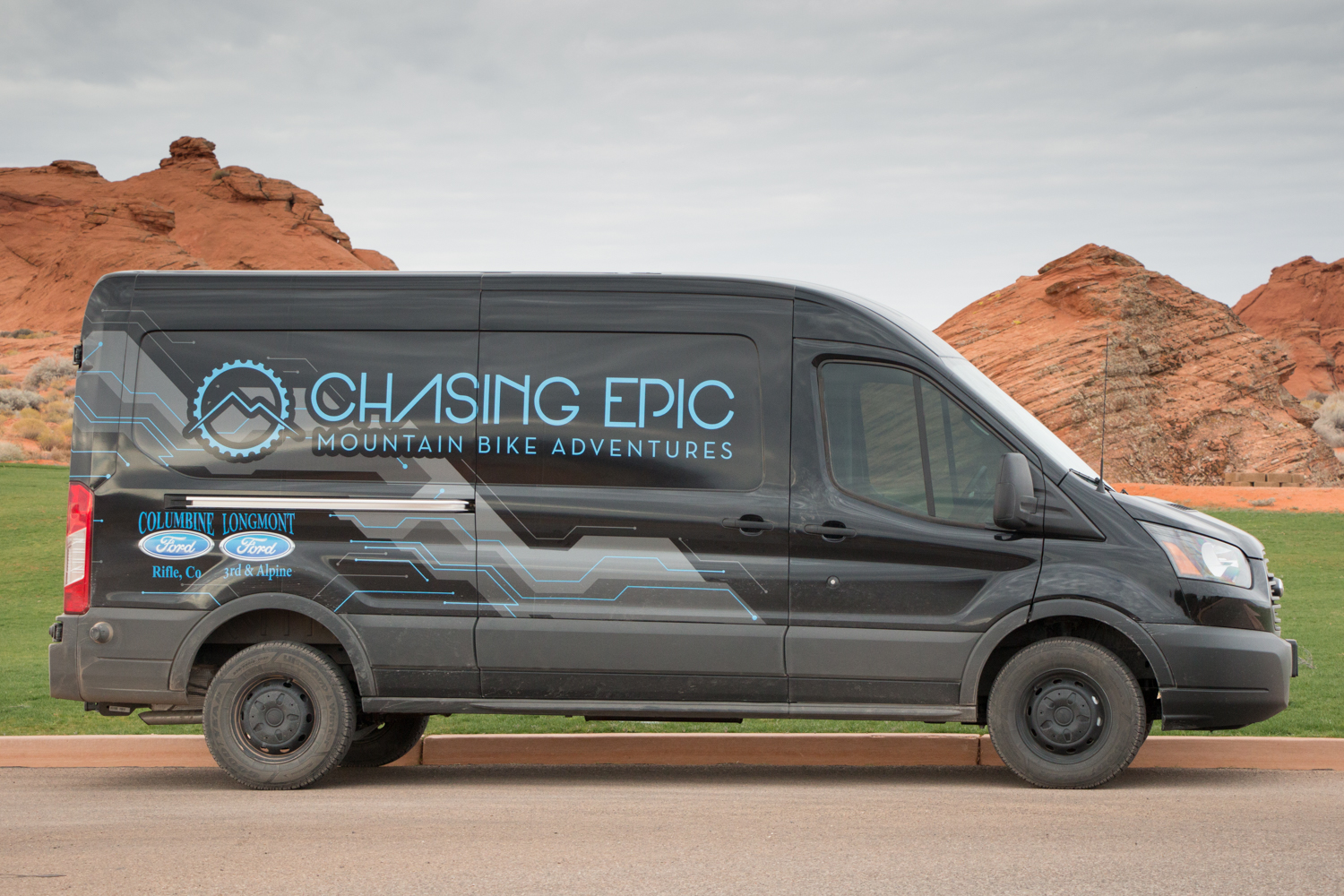 In late 2016, Chasing Epic partnered with the awesome guys at Longmont Ford (outside of Boulder, they also own Columbine Ford in Rifle, CO) to create the perfect mountain bike transport vehicle- a built-out, pimped-out 2017 Ford Transit 250.  If you’ve been on a trip with us since late last year, you’ve gotten a first-hand look at how we have it set up.  We’ve also given hundreds of “tours” to other bikers at various trailheads across the west who are curious how we fit everything inside.  Since there’s so much interest, we wanted to put together the “finer details” for those who haven’t been lucky enough to see us in person. 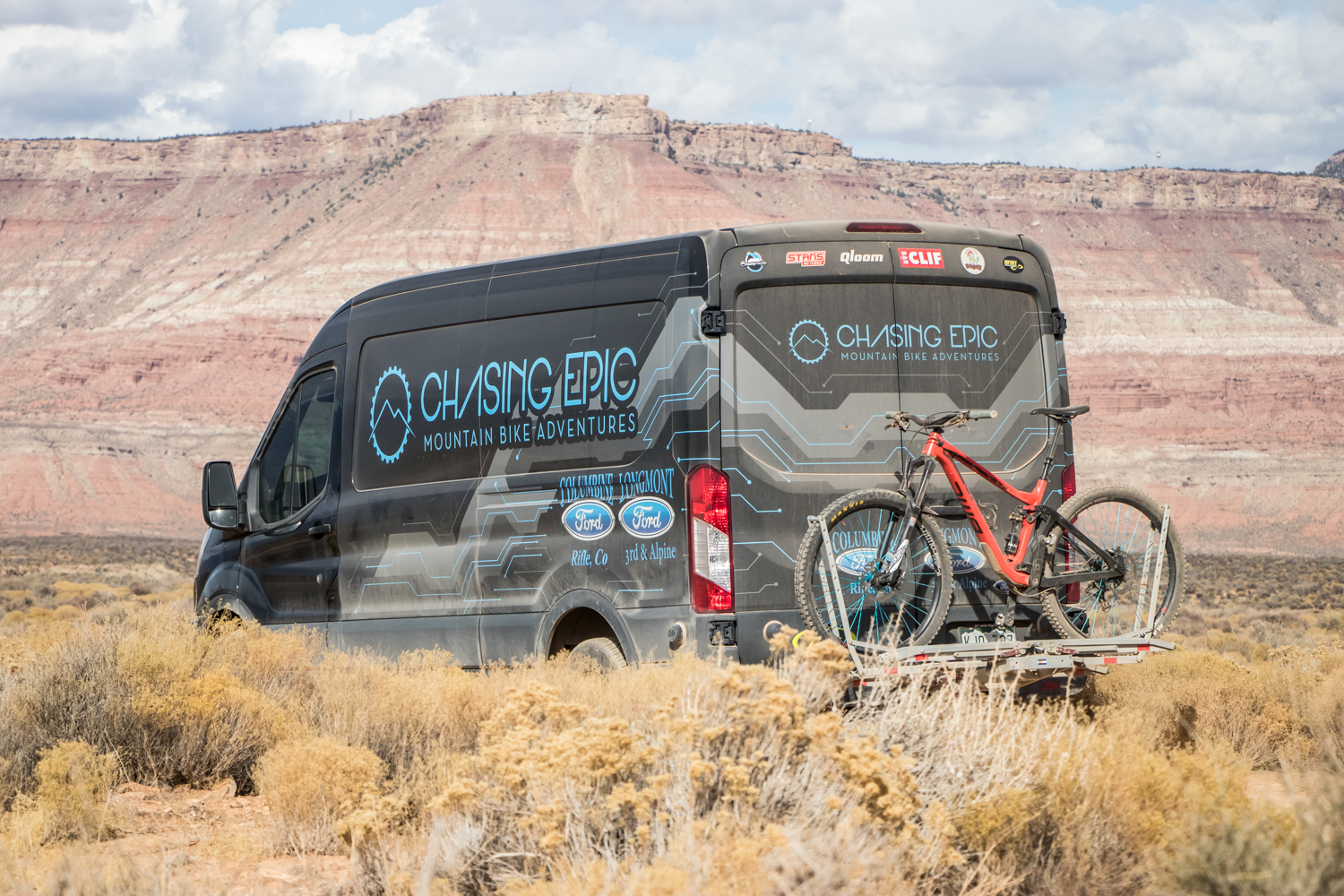 As mentioned above, the van is a 2017 Ford Transit 250; the model we chose is the long wheelbase, medium length, and medium height.  We also decided on the cargo van version vs. the passenger van, mostly due to the fact that we’re more concerned with transporting bikes instead of people!  Our goal when building the van was to fit 12 bikes on the inside, and another 3-4 on the outside… trust us, it’s no small feat!

The Transit 250 only comes in rear wheel drive, so that decision was made for us (more on this later).  We went with the economical 3.7L, V6 gas-powered engine mostly due to the price/value factor, as the performance is still quite solid and the gas mileage is more than adequate for a van this size (16-18mpg, depending on where we’re going).  With the Transit cargo vans, there are a ton of options to choose from- you can literally build these things out exactly how you want, whether it’s with certified Ford parts or after-market components.  Kind of like building a bike! 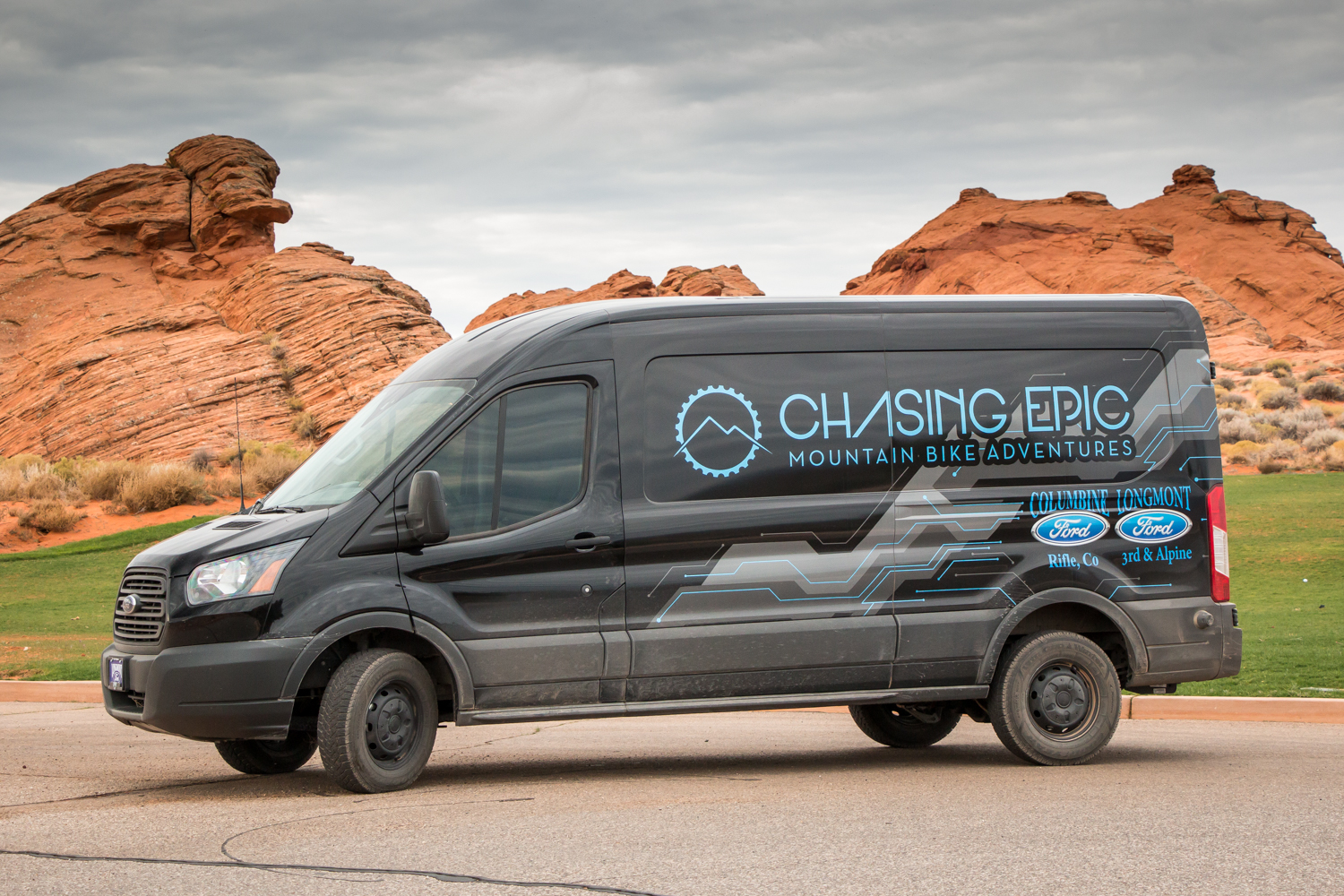 So… How Does it Drive?

In a word: smooth.  In fact, very smooth.  And never under-powered.  Being based outside of Boulder, our “commute” to the Chasing Epic trips takes us over multiple mountain passes climbing to well over 10,000 feet.  With the Transit 250, we never have a lack of power or handling prowess on the highways.

The van handles mountain passes much better than you’d expect a large cargo van to perform.  With 275hp and our relatively light payload (heck, even 12 bikes weighs less than a couple full-sized humans), the acceleration is fairly quick and the handling is great.  We’ve had the van in some pretty major snow storms going over Vail Pass and through the Eisenhower Tunnel, and the Transit performs incredibly well.  Just ask the 25+ stalled cars we passed last weekend heading home from Moab!

If I had to pick one nit with the van’s “performance”, it’s that the inside is a bit noisy.  But that’s no fault of the van, as we’ve decided not to insulate the walls or ceiling, so it’s basically just a sheet of metal between the outside world and the lucky passengers inside.  It’s not overwhelmingly loud, just a little more than we’re used to with our normal daily-drivers. 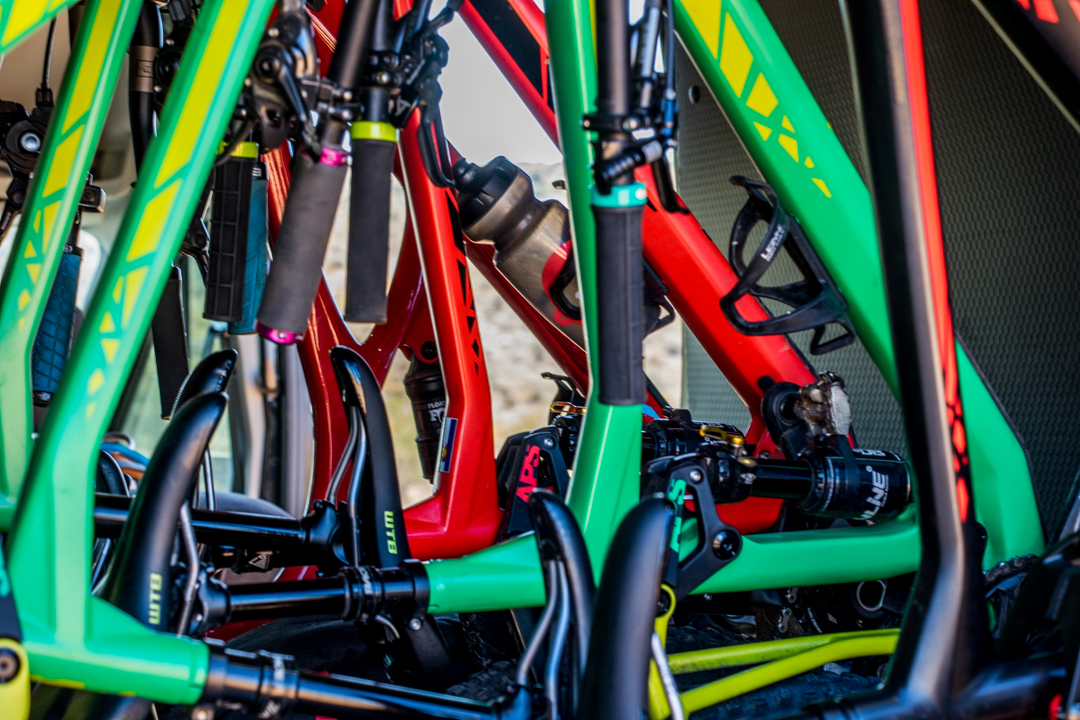 What Did We Customize?

As mentioned above, we built out our Transit with the main goal of transporting lots of mountain bikes.  For most of our trips, we’re carrying 10-12 bikes and in some instances, closer to 15 for our bigger trips.  For most of our destinations, we’ll have a properly-outfitted shuttle van for getting the crew to and from the trailheads, so we’re mostly concerned with getting the bikes and all of our gear to the initial meet-up location.

With that in mind, the first thing we did was work with the fine folks at Rocky Mounts to design and build a custom rack system in the back of the van.  We utilized their HotRod truck mount built into a system of rails, and lined the back of the van with 13 of them.  They’re offset in order to accomplish maximum storage capacity; in order to fit that many bikes, we have to loosen the headsets and turn the handlebars which essentially makes each bike about 8″ wide.  The rear tire is clamped down by a simple “flexi-tie” from Home Depot, which is a cheap but very effective solution.  Take a look at the pictures above and below to see how we do it. 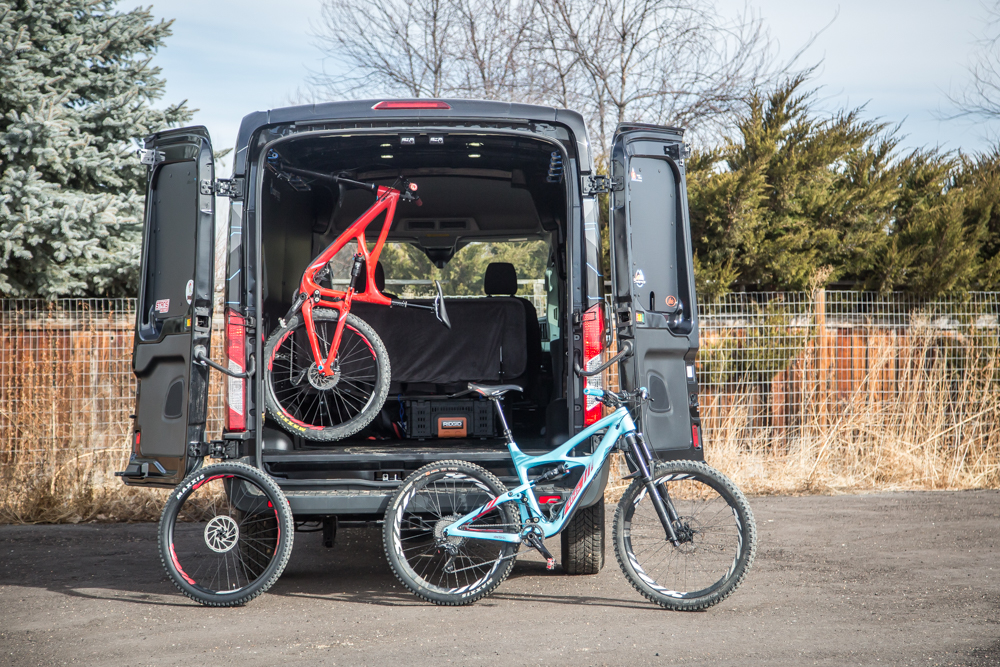 Next up is the rear bench seat for additional passengers (seen above)- in some instances, we’ll have to transport multiple folks to the trailhead, or back and forth to the airport, so we needed capability to do so without sacrificing much space.  We added a fold-down bench seat that accomplishes that for us while still giving us storage room if needed (which to be honest, is more important these days!).

In terms of performance-added features, the snow tires are the best bang-for-buck item on the list.  As mentioned above, some of our “commutes” can get pretty nasty in the spring and fall through the mountains of Colorado, and we’d still be stuck on the side of the road if we didn’t have snow tires.  Additionally, we’ve noticed in places like Crested Butte and Angel Fire that the added traction on dirt roads is quite nice to have as well. 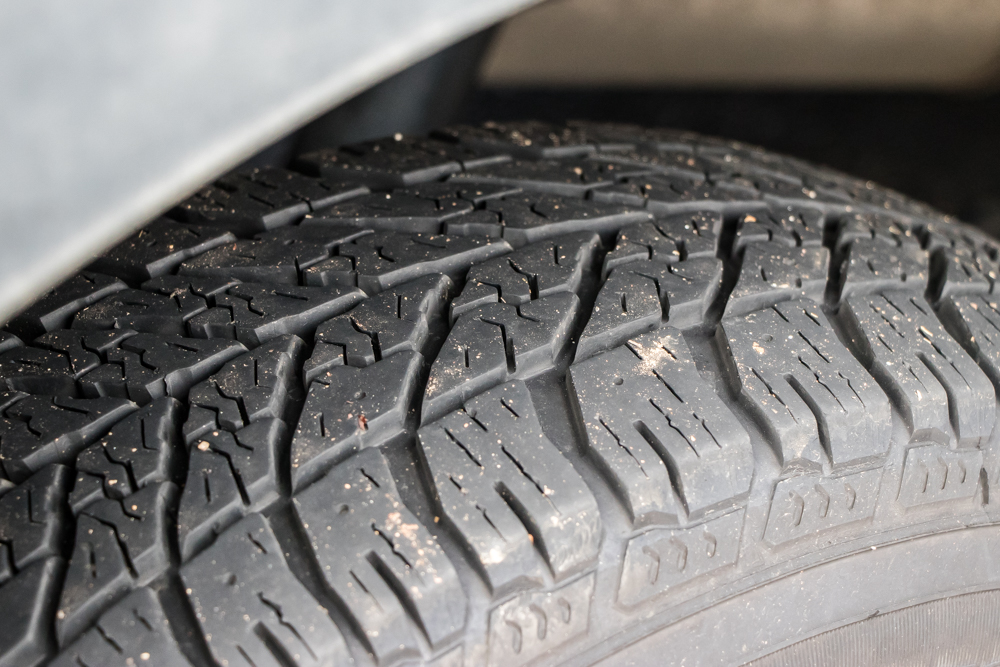 We also added a tow hitch on the back to allow for an additional 3-4 bikes of carrying capacity- a must have for any bike hauler!  Due to the swing-out doors on the back of the Transit, we went with the ultra-low profile 1up rack, which is the best of breed these days. 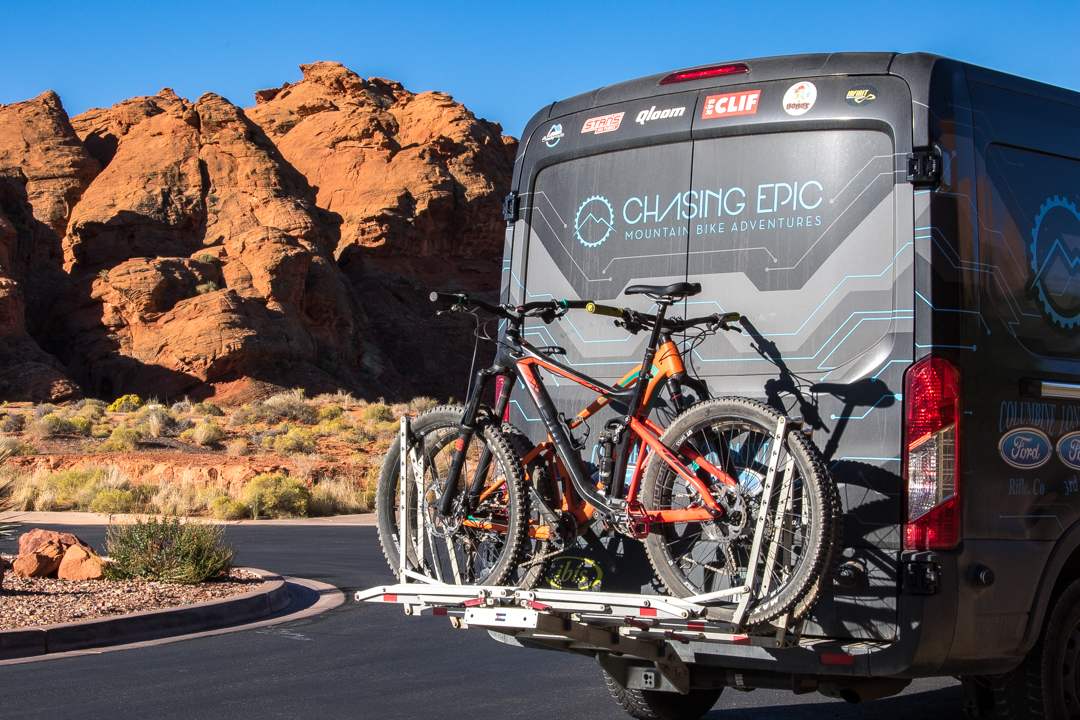 And a Few Other Things

The Transit is jam packed with useful features that are standard on all builds; things that make the driving/operating experience much better without putting a dent in your wallet.  First off are these built-in “bumpers” on the back of the van, made to keep the doors from slamming open in heavy winds (which we see in the desert all the time).  The Transit doors open 270-degrees, so these are almost a must-have. 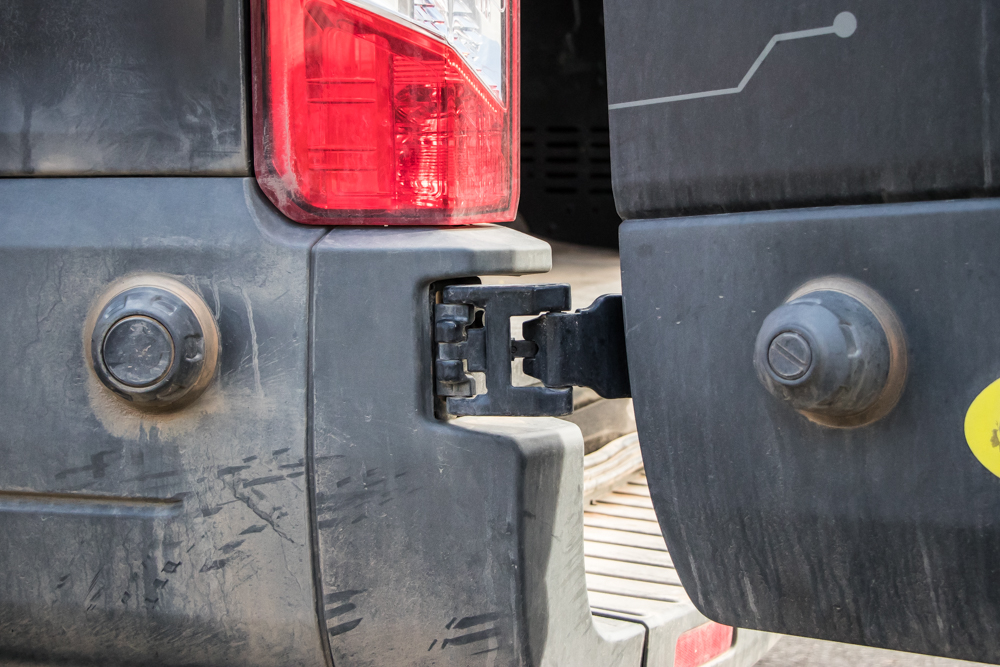 Next up are the small convex-shaped mirrors below the side-view mirrors on each side of the van…. if you drive a Transit regularly, these little babies are your best friends!  Since the cargo model doesn’t have windows in the back 2/3 of the van, visibility other than straight out the front windows is non-existent.  With these mirrors, you actually have visibility into your blind-spots, and can see who’s passing (or being passed). 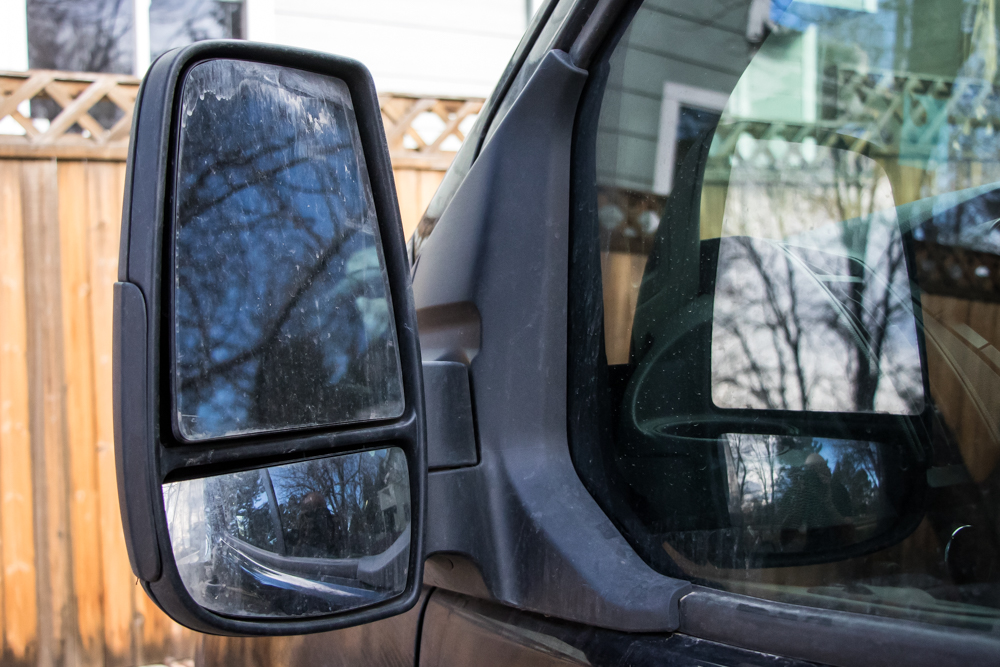 If you couldn’t tell already, we’re huge fans of the Chasing Epic Transit van… it’s been exactly what we need to make sure each and every one of our trips is executed flawlessly. We’re more than impressed with the performance of the van, and there’s literally nothing we’d do differently if we started over.  (but hey Ford, make a 4×4 version soon!)  When you join us in 2018- or if you see us at a trailhead near you- be sure to stop over and check it out!

Again, special thanks to the guys at Longmont Ford and Columbine Ford for helping us to make this happen. If you’re thinking of making a van purchase, let us know and we’ll put you in touch with these guys; they promised us they’ll take care of any Chasing Epic referrals!