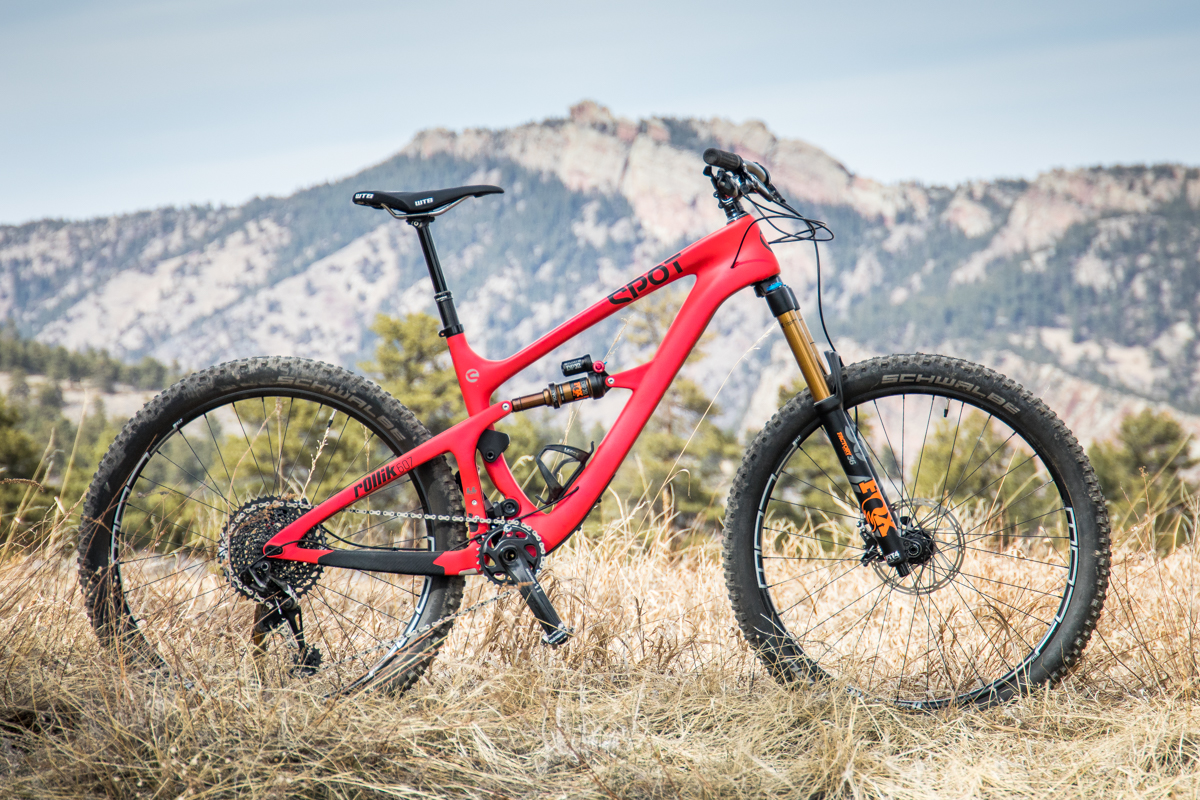 A few years ago, Spot Brand bikes (based in Golden, CO) released their first full-suspension bike, a 27.5″ 140mm rear travel all-mountain ripper called the Rollik 557.  It arrived to a lot of great fanfare and fantastic reviews, and was immediately popular with buyers looking for something new and different from a smaller, home-grown bike company.  Fast forward to this spring and Spot has just released an update to the Rollik with more travel, a burlier linkage, and more modern geometry.

The Rollik 607, to us, is the ultimate all-mountain (or Enduro) rig.  With 160mm of front travel supported by 150mm of Living-Link suspension in the rear, this bike can do it all, anywhere.  Sure, you won’t want to take it for a 50mm XC ride… but you could.

Spot is one of our main demo bike partners, and as such we’ve been lucky enough to ride the Rollik for the last month- riding it on terrain ranging from the rocky, technical singletrack of Fruita and Grand Junction to the steep climbs and rocky downhills on the Front Range of Colorado.  We’ve put the bike through the wringer on the trails it was meant to be on, so we’re finally putting our thoughts to paper (you know what I mean).  In full disclosure and as I mentioned above- Spot is one of our partners here at Chasing Epic.  That said, we don’t get any free bikes- we have to pay for them just like everyone else. 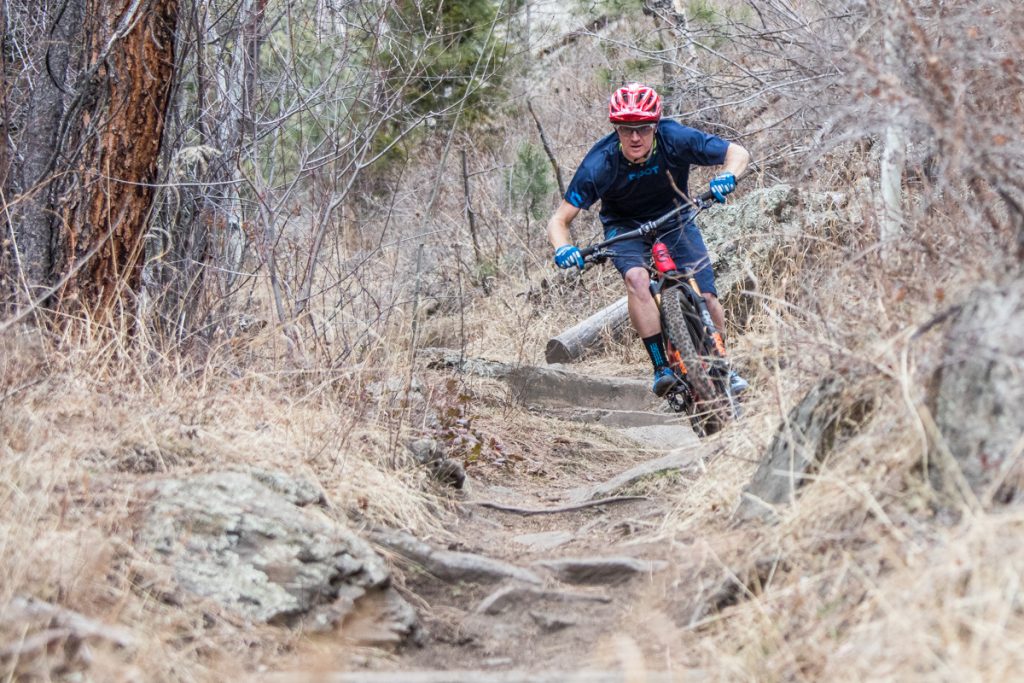 For the 2018 iteration of the Rollik, Spot made some major- and not so major- updates to the frame and the build: 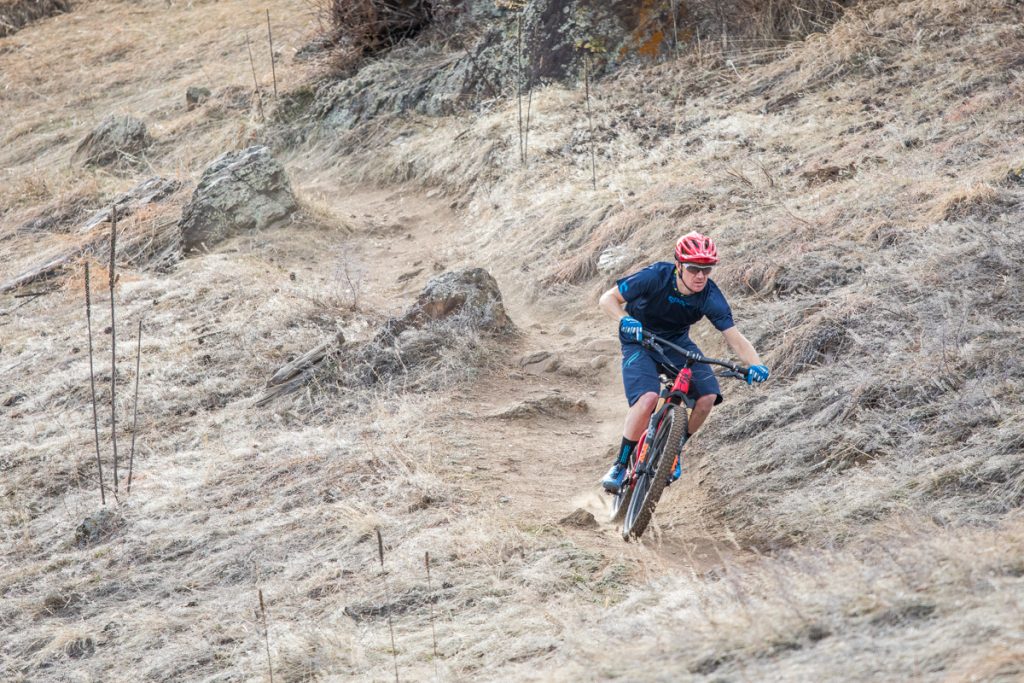 OK, let’s start by saying I haven’t consistently ridden a long-travel 27.5″ bike in a couple of years- last year, my main two bikes were the 120mm travel Ibis Ripley and the 150mm long-travel BMC TrailFox 29er.  I had written off 27.5″ bikes for the most part, because I preferred the riding efficiency over the playfulness of the smaller wheels.  Let’s begin this review with a pretty telling statement: because of the Rollik, I’m back on a 27.5″ bike.  It’s that good.

At first glance, the bike is pretty damn sexy.  You can tell Spot puts a lot of love into the manufacturing process- the frame is as well-built and refined as any other bike we’ve seen up close.  The curving lines of the frame and thoughtful cable routing tells you that Spot is for real.  The Hot Tomato color is bright and eye-catching, and their matte gray (not pictured here) is really sweet too.  We tested (and will be carrying as demos) the 5-star builds, which include an XO1 SRAM Eagle drivetrain and Fox Factory suspension, and it’s about as good as you’re going to find for a ~$5000+ bike.

We’ll get into more detail below, but our first take is that the bike climbs and pedals well, yet is very playful and smooth when you point it downhill.  It’s not the super-slack enduro bike that seems to be popular with a lot of manufacturers these days, but that’s not what it’s meant to be. 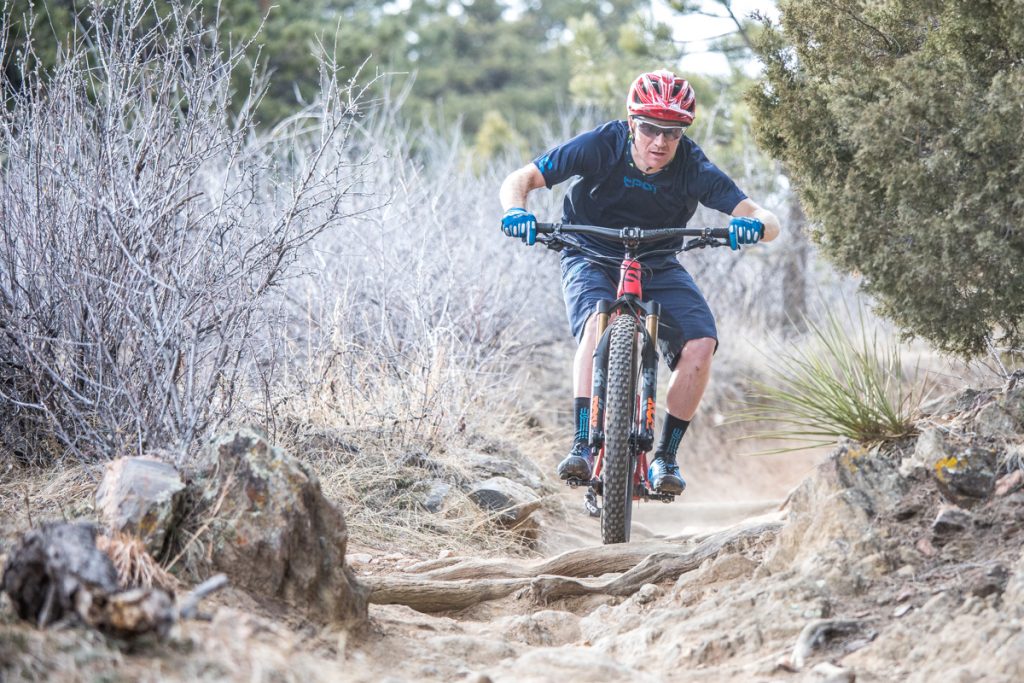 As mentioned above, we’ve been testing the 5-star build kit, which is priced very competitively at $5499 by way of Spot’s “Inside Line” program, which is their new direct-to-consumer model.  They’ll deliver the bike and have it professionally built by VeloFix, which is a nice touch.  Additionally, if you ever have any problems or warranty issues, Spot has only six full-time employees, so you’ll be able to talk to a real human being right away.

Here are the important bits on their 5-star build kit: 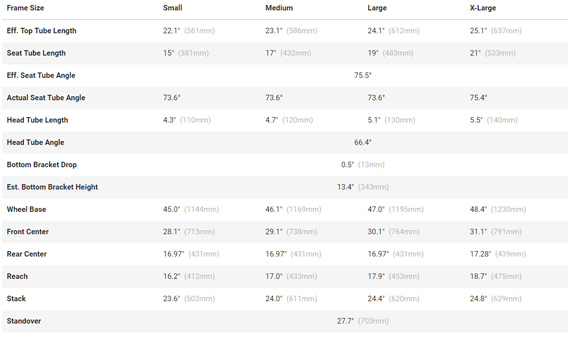 What would we change or upgrade?  First, the grips (not listed above).  For us, it’s important to have lock-on grips since we move things around and work on our bikes so frequently.  The ODI Vans grips are nice, but they don’t work for us personally.  The Stan’s Flow MK3 wheels are a solid choice and appropriate for the build level; they’re a component that you MAY want to upgrade down the line if you’re into a wider rim, or if you want carbon hoops.  For us, the durability of the Flows is nice to have.

Lastly, this was the first time riding a bike with the new BikeYoke Revive dropper post.  So far it’s been great, and we haven’t had to deal with it other than a quick hiccup right off the bat due to user error.  The lever has a nice action and the post is smooth and consistent.  The major benefit is that the dropper can be bled on the trail using their proprietary bleed system (look it up, it’s pretty cool) – we’re hoping that we don’t have to deal with it anytime soon! 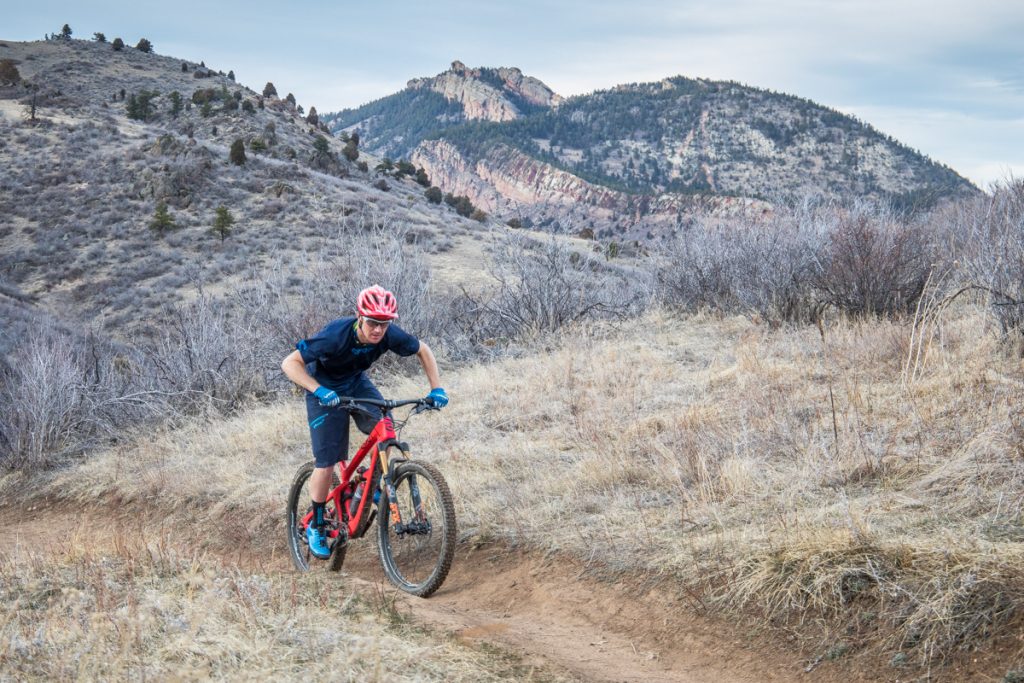 So…. how does it ride?  In a word: incredibly.  As I mentioned above, I’ve been eschewing 27.5″ bikes lately because I always felt slow and sluggish on climbs and pedaling through rocky, uneven flat sections.  That feeling has been all but eliminated by the Rollik; so much so, that I plan on regularly riding the Rollik on all of our spring trips to Fruita, Moab, and St. George.  After thinking about it for a while, I believe the new-found pedaling efficiency is a combination of a few things: higher-volume tires, new geometry, and Spot’s Living Link suspension design.  I’m sold.

The higher-volume tires are self explanatory: with the recent advent of “plus wheels”, tire manufacturers have begun to push the boundaries of tire width, and as a result we’re seeing more options in the 2.5-2.6″ range.  Spot uses 2.6″ Nobby Nics on their bikes; with the 29mm internal Stan’s Flow wheels, you get a tire/wheel combination that’s damn close in diameter to a 29″ wheel.  Additionally, Spot is known for their steeper seat tube angles, and the Rollik utilizes it well: at 75.5 degrees, you’re in a more aggressive pedaling position which allows you to hammer up hills and feel planted when the terrain turns technical.

And now the Living Link suspension design- it’s like nothing you’ve seen before.  I’ll let the video above explain the physics of how it works, but from my layman’s perspective- the bike feels more lively, and you’ve got more of a pedaling platform than any other bike I’ve ridden.  In the past, when I know I’ve got a long climb ahead, I’ve typically switched the rear shock into “climb” mode… but with the Rollik, I can leave it in “trail” and still feel like I’m getting the most out of the bike.  And trust me, I’ve taken it on some pretty burly climbs here in the Front Range, including one where we climbed almost 3,000 vertical in just under five miles.  Yes, you read that right. 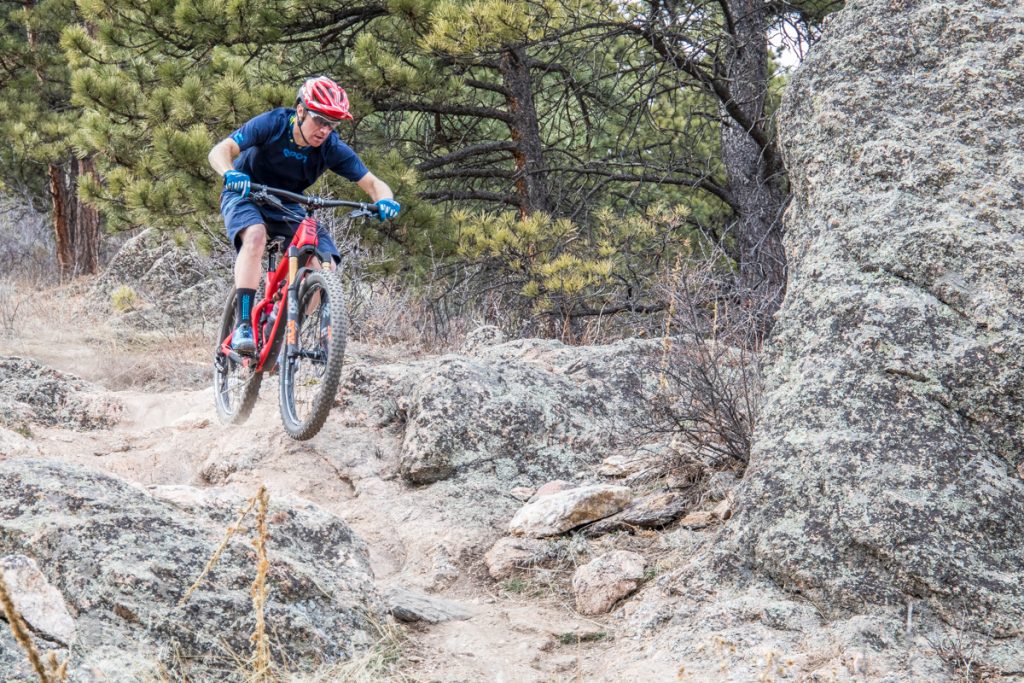 Now for the important part, right?  One of the main benefits of a 27.5″ bike is that it’s more playful than its larger wheeled 29″ brethren, and this bike is no different.  The Rollik 607 knows how to rip when you point it downhill, and it’s one of the more fun bikes I’ve ridden to date.

I’m someone that likes to take advantage of the different suspension settings, and so I’ll typically climb in “trail” mode (for both the front and rear suspension), and then switch it over to “descend” when I know a big descent is coming.  When I did this on the Rollik, it’s like the bike knew it was party time.  The suspension immediately smoothed out and ate up everything we threw at it: from the technical descents of rides like Hall Ranch, White Ranch, and Bobcat Ridge, to the swooping, flowy trails of Kokopelli and 18 Road in Fruita.  Seriously, it felt great.  My mind immediately thought “playful” and “smooth” when I was riding it.  The bike’s geometry allows for it to be quick-handling, yet the travel gives it some cushion where it counts. 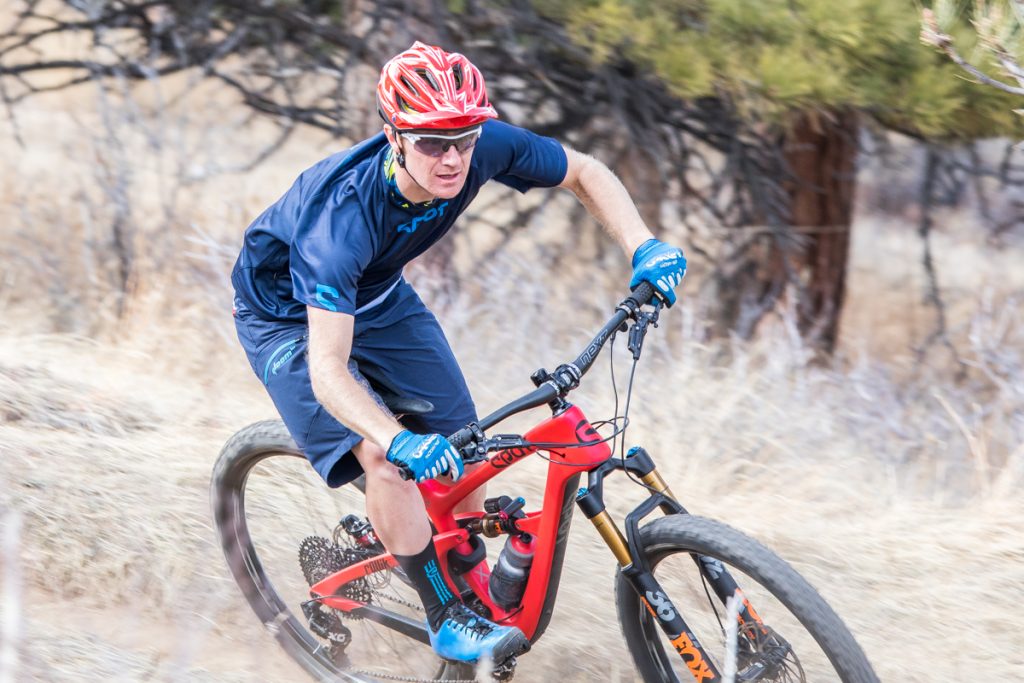 So, how would I compare it to other bikes I’ve ridden recently?  Most favorably, I’d say it’s like a slightly more beefy Ibis HD3: it’s playful like the HD3, but overall it feels a bit more confidence inspiring when the going gets rough.  We’ve also spent a little bit of time on the new Ibis HD4: the Rollik doesn’t plow through chunder and tech like the HD4, but on the flip side it’s more playful and a much better climber/pedaler.  Compare it to the long-travel 29er bikes I’ve ridden in the past?  Hmmm…. well, the Rollik gives me that playful feeling that I’ve been missing over the last couple of years.  A little bit of roll-over efficiency is lost due to the slightly smaller wheels, but I like the quick handling and smooth riding of the Rollik too much to go back.  Seriously. 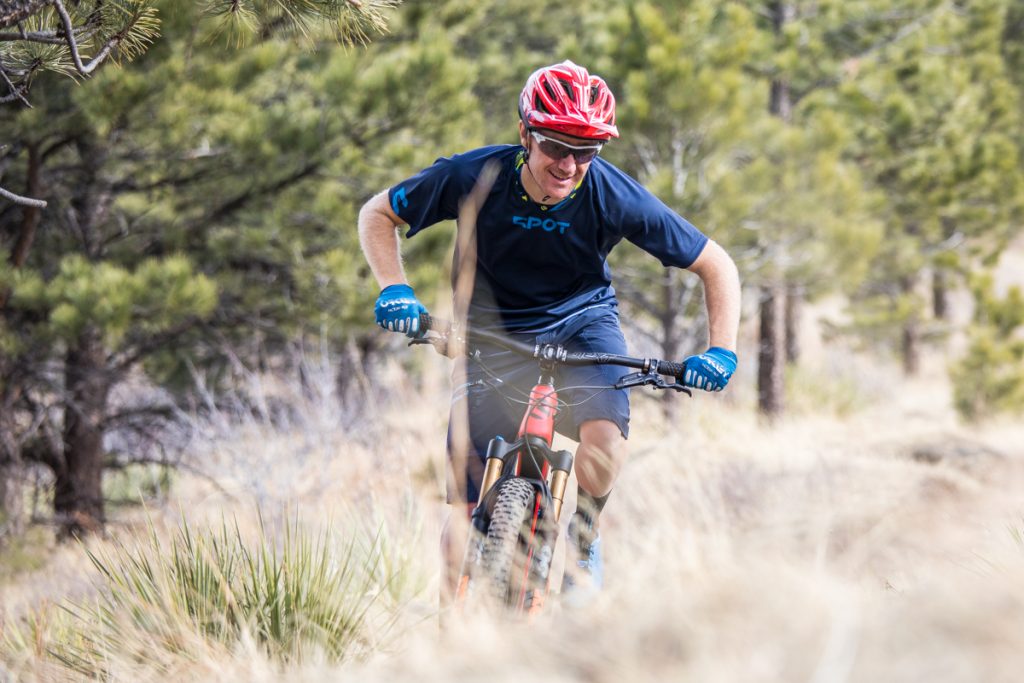 The picture above says it all…. riding the Rollik brings a smile to your face.  It makes riding bikes way more fun than it should be.  The guys at Spot have nailed it- the Rollik is a bike that can do just about everything, and does it in a great-looking, high-performing package.  There’s honestly not much- if anything- I’d change about the bike to make it a better performer.  OK, maybe the grips: come on Spot, spec some lock-ons for us so we don’t have to immediately replace them the first time we have to move things around in the cockpit.  😉

In closing, I’ll say this- we’re super psyched to have Spot on board as a partner.  They’re a great locally-based, small company that has great things ahead of them and they make incredible bikes.  Oh, and they’re fun to ride with too.  I can confidently recommend the Rollik for any of our clients looking to ride something new and exciting in Moab, Fruita, and St. George – and I think this bike will rip in the high mountains of Colorado and Utah on our summer rides as well.  It’s going to be a popular option for Chasing Epic riders this year!