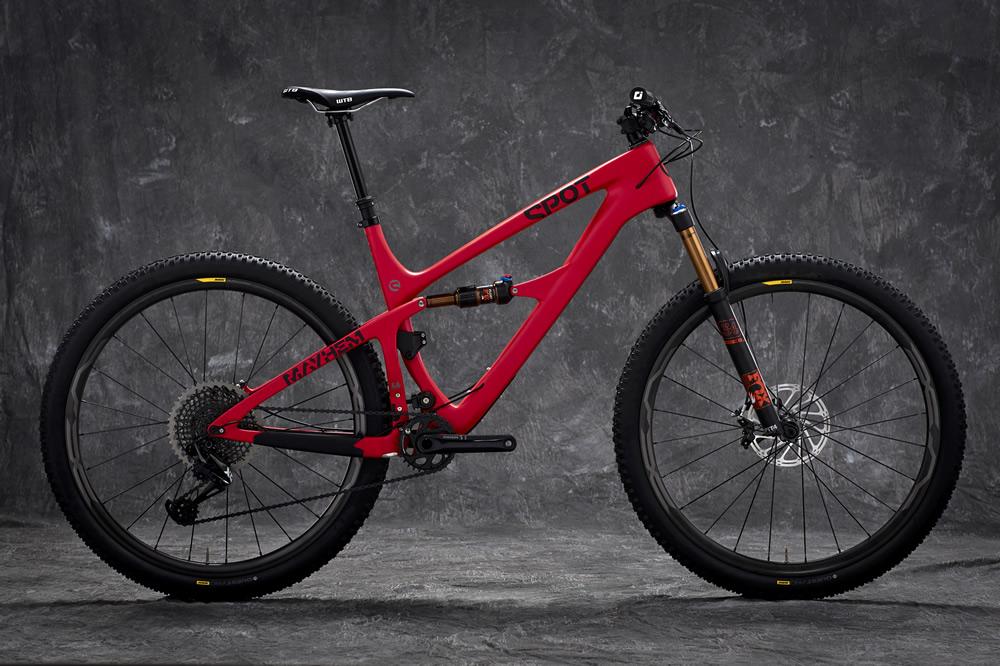 I’ll start this review off with a pretty bold, to-the-point statement: the Spot Mayhem 509 is the best overall bike I’ve ridden to date.  Now that’s out of the way, let me put a few caveats out there:

Now back to my supporting evidence; yes, the Spot is the best bike I’ve ridden and I know that’s saying a lot.  But the combination of efficiency, descending capability, and pedaling platform make it exactly what I’m looking for in a trail bike.  Sure, there are better bike options if you ride technical chunky terrain all the time, or if you’re knocking out 30+ miles of XC riding.  But for a do-it-all bike that won’t break the bank, the guys at Spot nailed it. 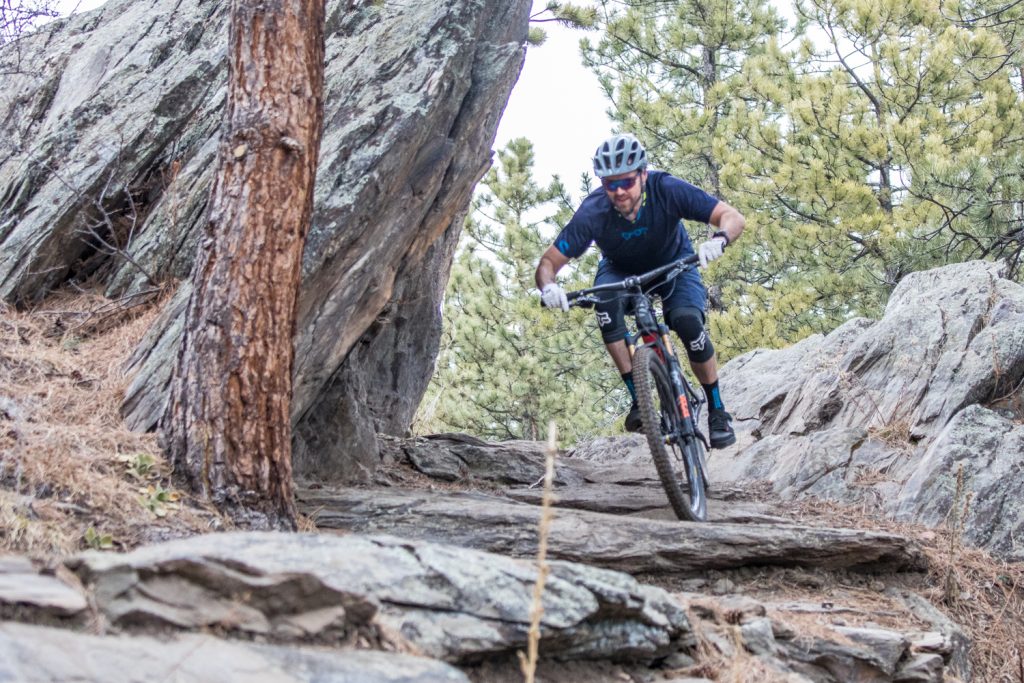 For those who aren’t aware, Chasing Epic partners with the crew at Spot for half of our demo fleet (the other half is comprised of Ibis bikes) so there’s an obvious connection between us and them.  That said, we’re very picky about the companies we partner with, and we want to provide our clients the best bikes available for our trips.  So as a disclaimer to this review, know that… but at the same time, also know that we don’t get these bikes for free, we have to pay for them just like anyone else running a business.

The Spot Mayhem is a mid-travel (130mm front and rear) 29er, which to us is the perfect “do it all” bike for most of the folks we know.  The category of bike has exploded in recent years, and there are some pretty stout competitors out there with the SC Hightower, Ibis Ripley, and the Yeti SB 4.5C.  Spot’s unique linkage- called the Living Link- sets them apart from the rest of the bikes out there, however, as it’s a patented design you won’t see anywhere else.  For simpletons like me, the Living Link replaces the lower pivot linkage with a carbon plate (that can flex), which gives it much more torsional rigidity and provides more of a pedaling platform.  Combine that with their steeper seat tube angle (74*), and the Mayhem is a beast on any climb you can throw at it, and it pedals through any kind of singletrack with great ease and efficiency. 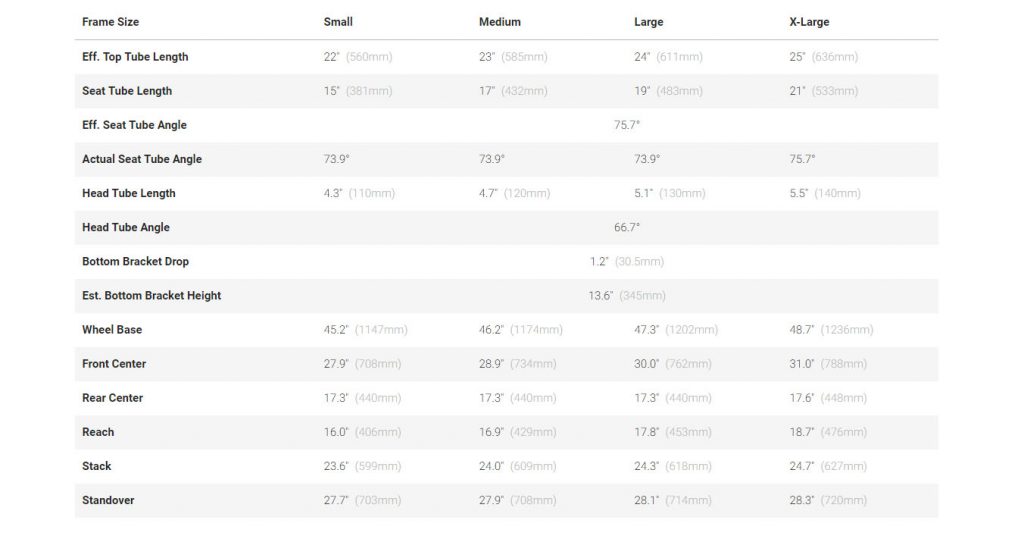 If you check out our demo fleet, you’ll see that we only carry Spot’s 5-star builds… it’s the middle option of the three choices they provide, and we can’t think of a thing we’d change.  For just over $5000 you get an XO1 Eagle drivetrain, Fox Factory suspension, Stan’s Arch MK3 wheels, SRAM Guide RSC brakes, a BikeYoke Revive dropper and other carbon bits.  Because Spot is a consumer-direct brand only, they can provide all of that at a much lower price point than the competition: a similarly-spec’ed bike from Yeti will run you north of $7000! 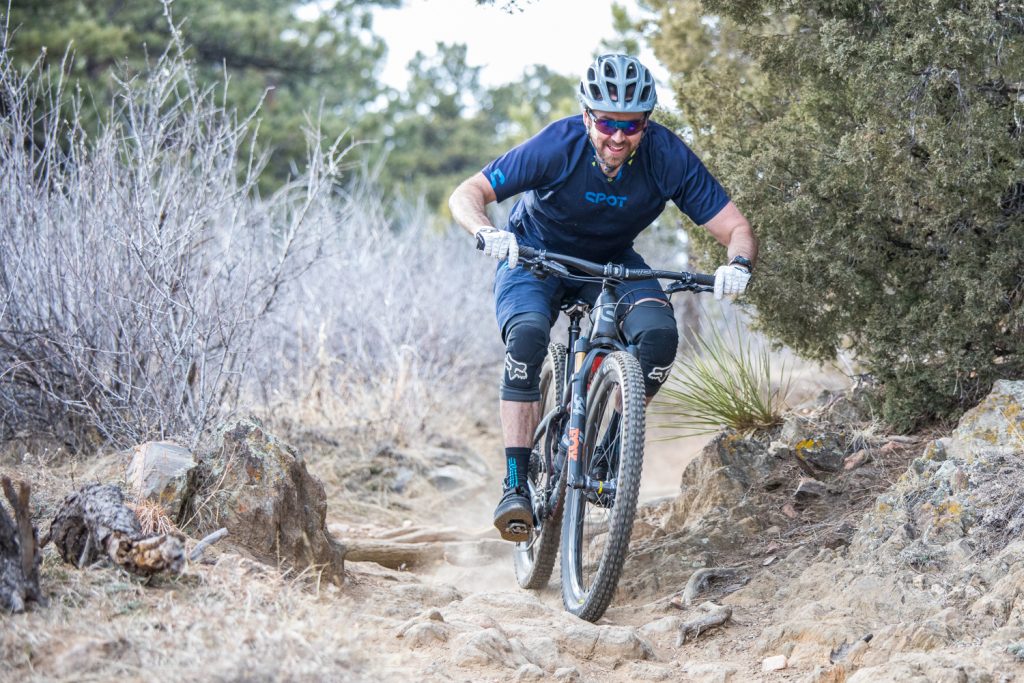 HOW DOES THE BIKE CLIMB?

In a word: fantastically.  The steep seat tube angle, combined with the Living Link, give the Mayhem a climbing prowess like no trail bike we’ve ridden before.  Sure, you can find a more efficient 29er hardtail that weighs 20 lbs, but that’s comparing apples and oranges.  If you look at other bikes in its class (like the ones I mentioned above), I’ll take the Mayhem over all the others… and I’ve put significant time on each of those with the exception of the Yeti.

Like I said in my Spot Rollik review, the geometry and the Living Link work together to provide an incredible platform for pedaling. This allows you to ride with the shock wide open in technical terrain and not feel like you’re losing any of the power you’re putting into the bike.  Same goes with the Mayhem- I’ve done 2000 ft climbs in the Colorado high country and steep, punchy climbs in the Utah desert, and this bike eats it all for breakfast.  With the fast-rolling Schwalbe Nobby Nics on the bike, this thing is a rocket.

One thing I did notice: the bike is so fine-tuned and efficient, that it takes a bit to find the sweet spot for the rear shock.  More so than any other bike I’ve had in our Chasing Epic demo fleet… but once you find the perfect pressure, the bike works flawlessly. 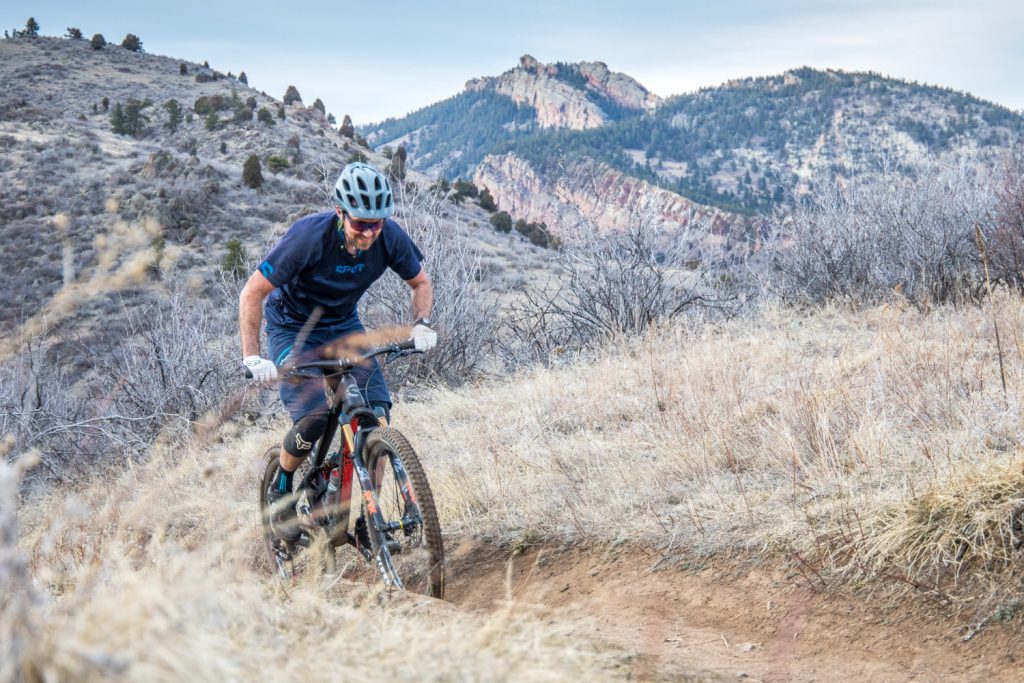 AND WHAT ABOUT DESCENTS?

You guessed it, the Mayhem descends pretty damn well too.  To me, the bike feels more stable and “beefy” on technical descents than similar bikes I’ve ridden like the BMC TrailFox or the afore-mentioned Ibis Ripley LS.  As I talked about above, the rear shock definitely takes a little fine-tuning, or else you may feel like the Mayhem is a bit too stiff for your liking.  But again, once you get the rear shock dialed in and to your liking, it’s quite smooth and plush.  I like to describe the ride as “planted” and “stable”.  The first time I rode the Mayhem earlier this spring, I managed to clock half a dozen PRs on my local test track (Hall Ranch outside of Boulder) and it didn’t even feel like I was trying.

I do think you can reach the bike’s limitations on the more burly trails in places like Moab and Fruita: when the terrain gets really technical and rough, I’d rather be rocking the Rollik than the Mayhem.  Most of those limitations are due to the smaller travel, to be honest.  But that said, I’d be perfectly happy riding the Mayhem for four days in Moab knowing that the sections of trail where its over-matched are significantly fewer than those where the bike shines.

I’m in the process of working with the Spot guys to replace the rear Fox Float EVOL with the newer Fox DPX2, and I think that will significantly transform the bike on rough terrain and bring a new level of “smoothness” to the ride characteristic.  Additionally, they offer an upgrade to the Fox 36 140mm up front, and that will solve all your problems for heavy-hitting trails (we don’t have any 140mm forks on our demo bikes this year, sorry). 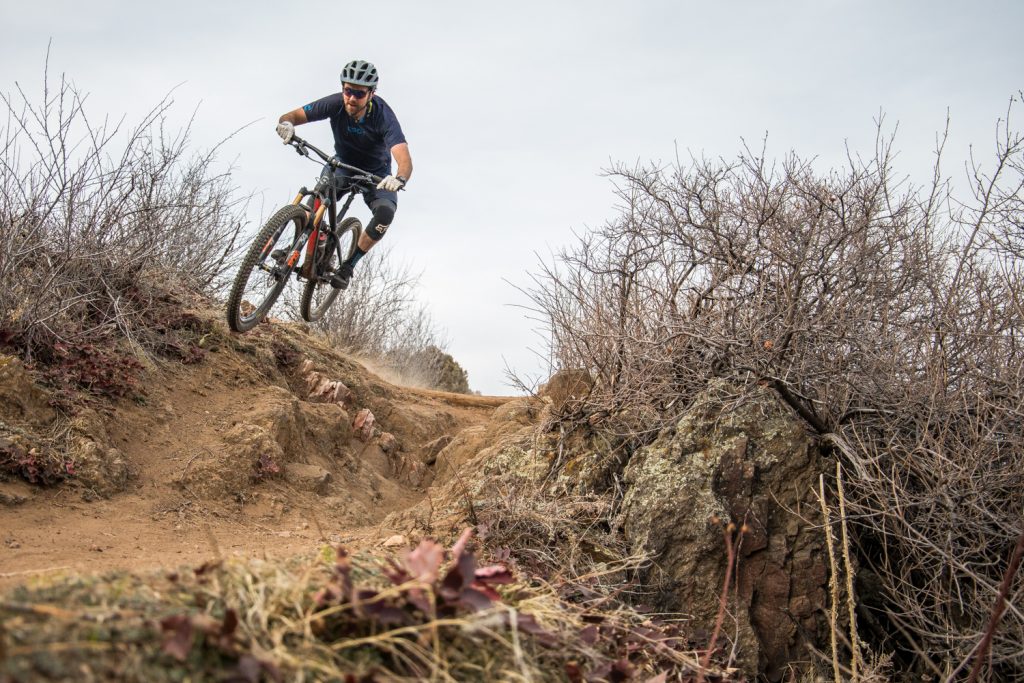 HOW DOES IT COMPARE?

We get this question a lot, and I personally think it’s the best way to break down a bike and how it fits into the market (and your specific riding style).  I’ve ridden the Mayhem quite a bit this year, and I’ve put a significant amount of time on both the Ibis Ripley LS- which we also carry- and the BMC SpeedFox 29er.  All three bikes sit firmly in that “trail 29er” category that’s so popular.

Ibis Ripley LS:  To me, the Mayhem climbs better than the Ripley, and it’s a more stable-feeling bike on the descents.  That said, the Ripley LS is a lighter bike, and it’s a more playful bike with regards to its handling.  I would choose the Ripley if you tend to favor the XC side of “trail riding” and your trails are a bit more tame, and the Mayhem if you’re more on the “all mountain” side and are a little tougher on your bike.

BMC SpeedFox 29: The SpeedFox was probably the best climbing trail 29er I’ve ever ridden- they had that thing built up so light and fast (full XTR, about 26 lbs for a size medium) that it was a billy goat on the climbs.  So with regards to climbing, the BMC takes the cake.  That said, I’ll take the Mayhem in all other situations: descending, pedaling, bike handling, etc.

Santa Cruz Hightower (Bonus!): First, a caveat- I’ve only ridden the Hightower a few days in Brevard, NC earlier this year, but I really liked the bike and had it on some fairly burly terrain in Pisgah NF, along with some fast, flowy trails in Dupont State Forest.  To me, the Hightower is the closest comparison point to the Mayhem that exists on the market today.  I would say the Mayhem climbs 5-10% better than the Hightower, and the Hightower is 5-10% more fun on the descents; that’s to say, I’d be happy with either bike for just about any kind of terrain out there. 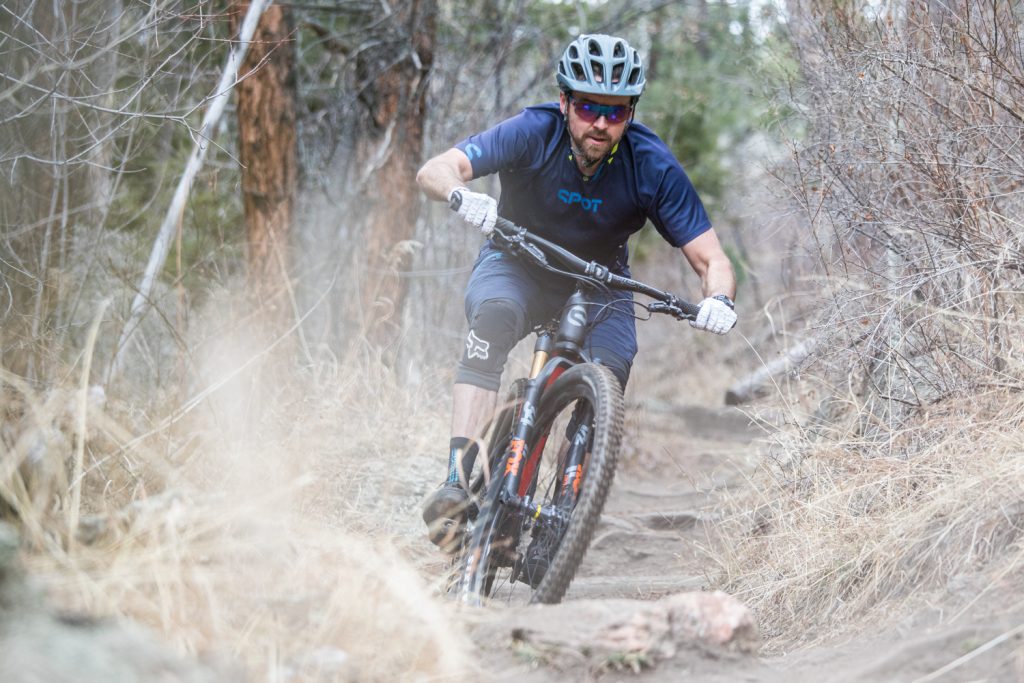 If you couldn’t tell by now, I absolutely love the Mayhem.  And from the feedback we’ve received over the first 1/3 of our 2018 trips, so do our clients.  We’ve run trips in Moab, St. George, and Fruita thus far and everyone has given rave reviews for the Mayhem in some pretty technical terrain.  I’m excited to see what folks think once we hit the high-country trails of Crested Butte and Angel Fire!

If you’re looking for a killer trail bike, I think the Spot Mayhem should be strongly considered- it’s an amazing balance of climbing, descending, and pedaling all packed into a well thought out build kit that won’t break the bank.  We’re stoked to provide this bike for our riders this year, and we look forward to growing with the guys at Spot as they spread the word and more folks ride their bikes!