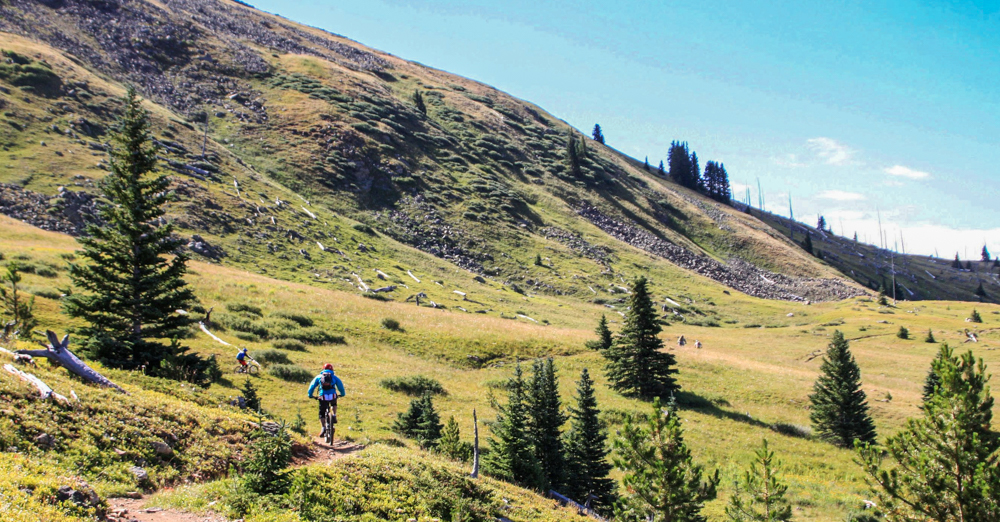 About the Author: Matt Miller has been riding bikes off and on since he was a teenager- with gaps spent researching motorized hobbies- and concluding that bicycles are still way cooler. He has been experimenting with enduro racing, but his favorite types of rides are those where it is tough to find human contact and 7/11s. Off the bike he can usually be found somewhere around Denver.

There is very finite window to enjoy the Colorado high country when it is dry. Your time of opportunity is literally narrowed to one season, three months in length, June to September; after the mud and before the snow. It is finally making sense to me that I should be spending less time on my local trails and more time in higher alpine territory above 8,000 feet. The Monarch Crest trail is another bucket list item that requires a shuttle, six hours in the saddle, and the commitment not to paste from this year to next year’s to-do list.

High Valley Shuttles appeared to be the only shuttle company around that drove during the week, so once we ate some breakfast and rolled up the tent, we filled up our Deuter hydration packs and our coffee cups and headed out. Apparently, we weren’t the only ones lucky enough to have our lives in order to be able to ride on a Wednesday and about 15 others were joining us. It always feels somewhat like the first day of school when you get on a shuttle with other mountain bikers. Everyone is checking your bike out or looking to see if you ride flats or clipped in. Is that an XC helmet or enduro? 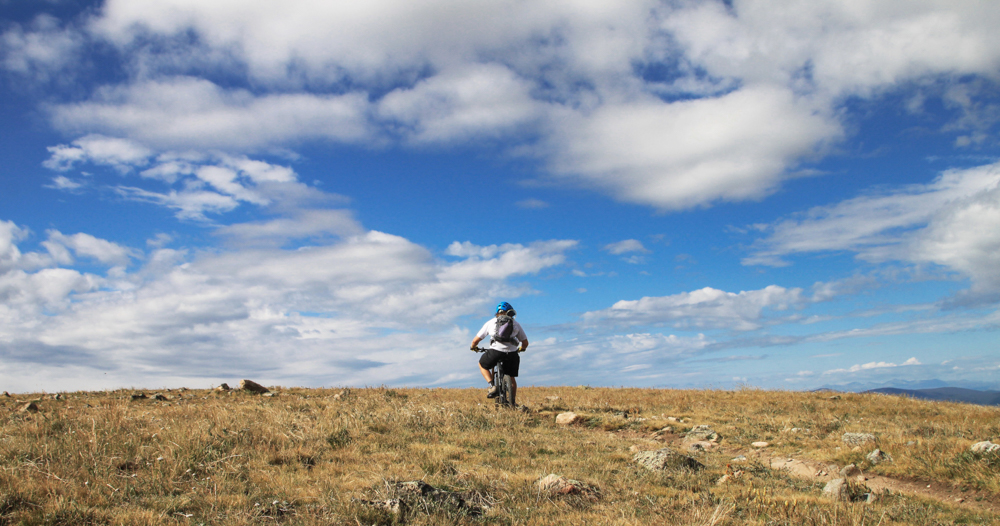 With the vans parked and bikes unloaded, the shuttle driver unfolded a map gave us a trail briefing similar to an intel dump for a small scale military operation. “Keep on this trail, until you hit a fire road, look for a red reflector…” The driver isn’t responsible for knowing everyone’s capacity to remember directions, and that’s why you should either download the MTB Project app on your phone, or to make friends. “Wanna team up?” asked another rider as we hopped on the first trail outside of the Monarch Lodge. “Definitely”, thinking that it is usually easier to navigate with partners, and way easier to survive after you get lost.  We might forget to pack half of what we should’ve, but we usually end up with a friend or two after the ride is done.

The first ascent does not disappoint one bit. The dry, chunky trail winds you close to the edge of some peaks that were snowy a few weeks before. After some more alpine climbing, and exposed ridgelines you start dropping elevation into the trees again. The first wooded sections of the ride must be some of the best riding in Colorado. It varied between techy roots and rocks, to steep sections with little sprint climbs, and 100 percent beauty in all of it. The dirt is also second to none; soft soil combined with damp blankets of pine needles equal Superman traction as you rail through straights and corners.

A quick jaunt on Colorado Trail Segment 16 and some more grindy climbing, took us to some dusty switchbacks into the Silver Creek trail. If you aren’t used to riding loose trails, it’s a great time to start being that you are now obligated. The rocky shale actually packs down pretty nicely under your tires which doesn’t take away too much confidence. 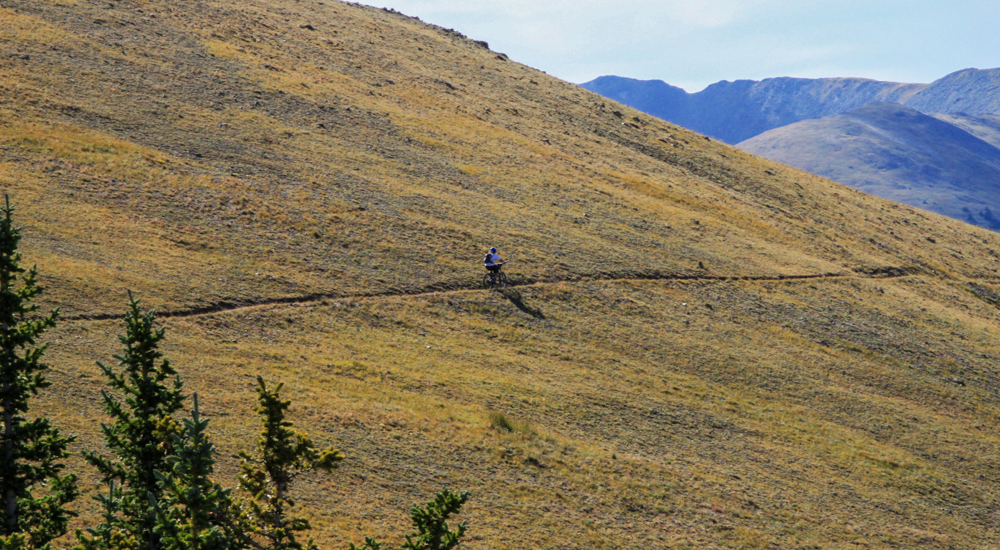 Another short fire road climb after Silver Creek takes you to the last leg of your journey, Rainbow Trail. Another ten miles after coming this far doesn’t seem like much, but it is probably the most grueling part of the entire trip. Up, down, up and up. The first five miles of Rainbow trail has your quads paying twice as much for any bit of gravity you might use. Dropper up, dropper down, pedal, pedal, attack position and descend. The four of us were feeling the mileage at this point, but right after we unwrapped some snacks, thunder in the distance made us think twice. 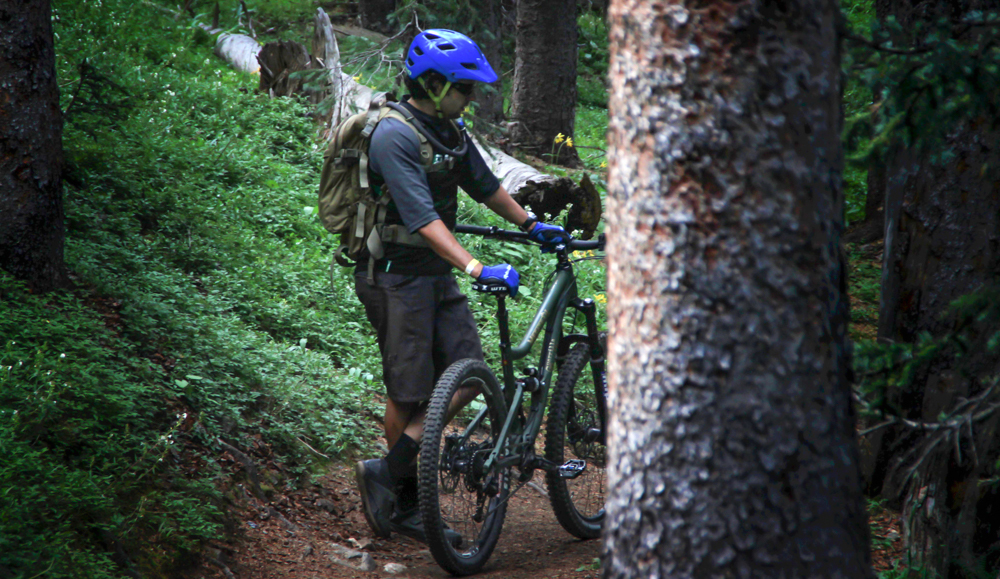 Your motivation tends to wane on these longer rides and you usually have to think through different things to keep it up. If you’re like me, then you’re hopped up on caffeine in the morning when the driver hands you your bike, which carries through lunch, and you regain some momentum after a trailside PBJ, and maybe a Gu or a Honey Stinger. It’s the same feeling you get on Monarch Crest, or Mag 7 and Whole Enchilada in Moab, or when you’re 80 percent done with your race course for the day. That feeling is a sense a determination brought by committing to the ride purely out of fun, and having no choice but get to the end. The punctuation at the end of the day’s sentence is a thousand calorie meal and something cold to drink while everyone talks about their favorite part of the day and knowing that every pedal stroke out of the million you did that day was worth it.

Note: Chasing Epic does not currently run trips to Salida to ride the Monarch Crest… but it might be something we look into for future trips to Crested Butte!