Guest Blog: Getting the Most Out of Your Trip, Part I

Chasing Epic Mountain Bike Adventures / Destinations  / Guest Blog: Getting the Most Out of Your Trip, Part I

Guest Blog: Getting the Most Out of Your Trip, Part I 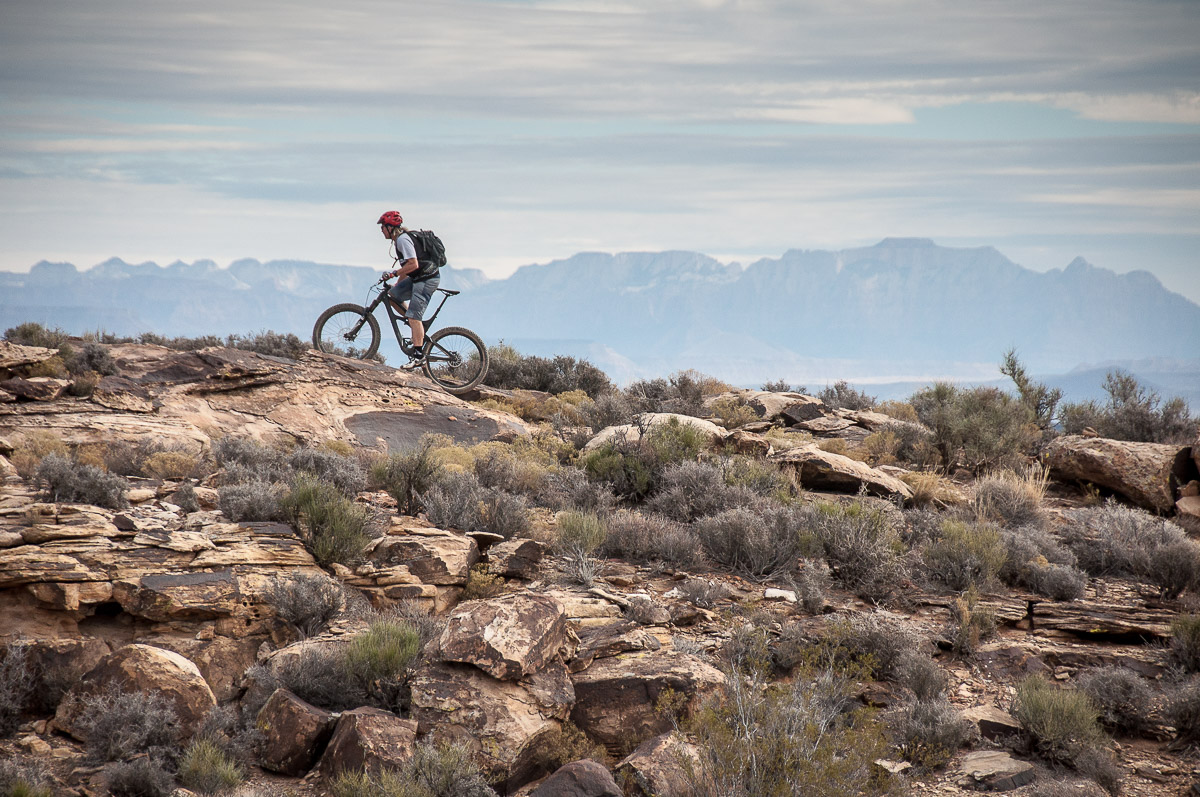 Some of you may recognize some of this information from my Facebook review last month. A few of my friends have also asked questions about my trip planning and I thought that maybe others would benefit from the answers as well.

I had the opportunity to take some time off from work and ride with Chasing Epic in November of 2016. The ride I went on was the Ibis Migration “Appetite Seminar” – a 3-day adventure the weekend before Thanksgiving. For decades, I’ve been an avid mountain biker riding exclusively on the East Coast. I had only recently ridden outside of New England in early 2016. My first ride “out west” was in Sedona.  It wasn’t really planned, I just found myself in Arizona with two extra days, rented a bike and rode as much as I could handle. Once I was exposed to the rocky terrain there, I was hooked and knew I had to get back for more.  I wasn’t sure how I’d do it, but I knew I would have to get back out that way. 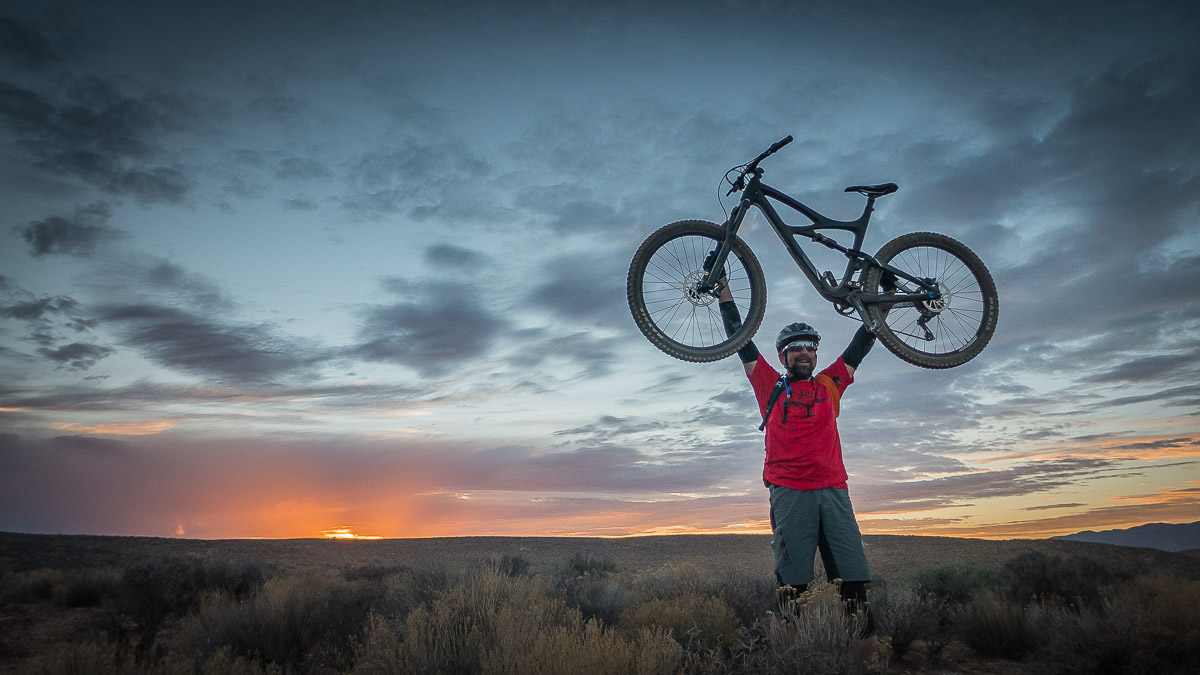 Enter Chasing Epic. I have to assume that nearly everyone has heard about guided rides and destination biking. Who hasn’t heard of Whistler, Moab, Sedona, Crested Butte or St. George… And who doesn’t drool when they watch YouTube videos of the riding in these places? I’ve long heard about guided rides, but I have never had a chance to go on one of these guided adventures. For me, it’s mostly been a cost issue – getting to the destination, booking a hotel, meals, rentals (car & bike), it all adds up. That said, I do really enjoy reading about the adventures people go on. I had been reading Chasing Epic’s newsletters and blog posts for a while so when I got the one about the Ibis Migration, I realized this was my chance. A weekend of riding Ibis bikes in Utah with a bunch of other Ibis fans and with Chuck himself – how could I miss out on this? I viewed this as one of those “all inclusive vacations” that people go on and once I looked at it this way, I signed up.

Even though Chasing Epic handles just about everything, you still need to plan a little. You do have to get yourself to the meeting point, but beyond that you are pretty set. I’ll elaborate a little on what they offer with this particular trip and offer up a few things I did to get the most out of my trip. I understand everyone’s situation is different and some will do more and others less, the key here is to make it your own trip.  A lot of this might come across as basic info that people know without thinking, but for me sometimes I need a reminder or a gentle nudge to get me there. If adventure travel is new to you or if you’ve been on the fence about going on one of these trips, maybe my ramblings here will help guide you to your next adventure or at least push you off that fence so you can get there yourself.

Chasing Epic pretty much covers everything for the weekend from the minute you get to St. George. Bike, shuttles to the trail heads, guides, food (two meals/day for us, lunch is now also included), and of course lodging. Technically for this Chasing Epic trip, all one needed to do was get to the St. George airport and the rest could be taken care of.  There was even an option to be picked up from the airport in St. George as well – and at the end of the trip get dropped off there. A few people went with that option, but I opted to get in a day early so I had a rental car and room at a nearby hotel. From the moment I signed up, I felt as though Steve was on top of things. He sent out a few emails leading up to the ride. The St. George area has a ton of outdoor activities to offer. One email had tons of info such as; recommended things to pack, the weather report (vital for planning and packing), a bike sign-up sheet and some other trip details, like area info- which I dug into. That leads me to this tangent…

I drink a lot of coffee and like to get my coffee from a local cafe if possible when traveling. In St. George/Hurricane, I had two excellent coffee experiences. First, I found a great coffee roaster (River Rock Roasting Company) that has amazing coffee and the best cinnamon bun I’ve ever had (this was my best find in years!) Second, part of the itinerary included a quick stop at a local bike shop: Over the Edge. OTE has an espresso machine and the person working that day made me an excellent latte (I think they use the espresso from the roaster above). It was also really great to have a mug in hand as I walked around the store looking at bikes and talking to the other riders before we headed out for the last day of riding. 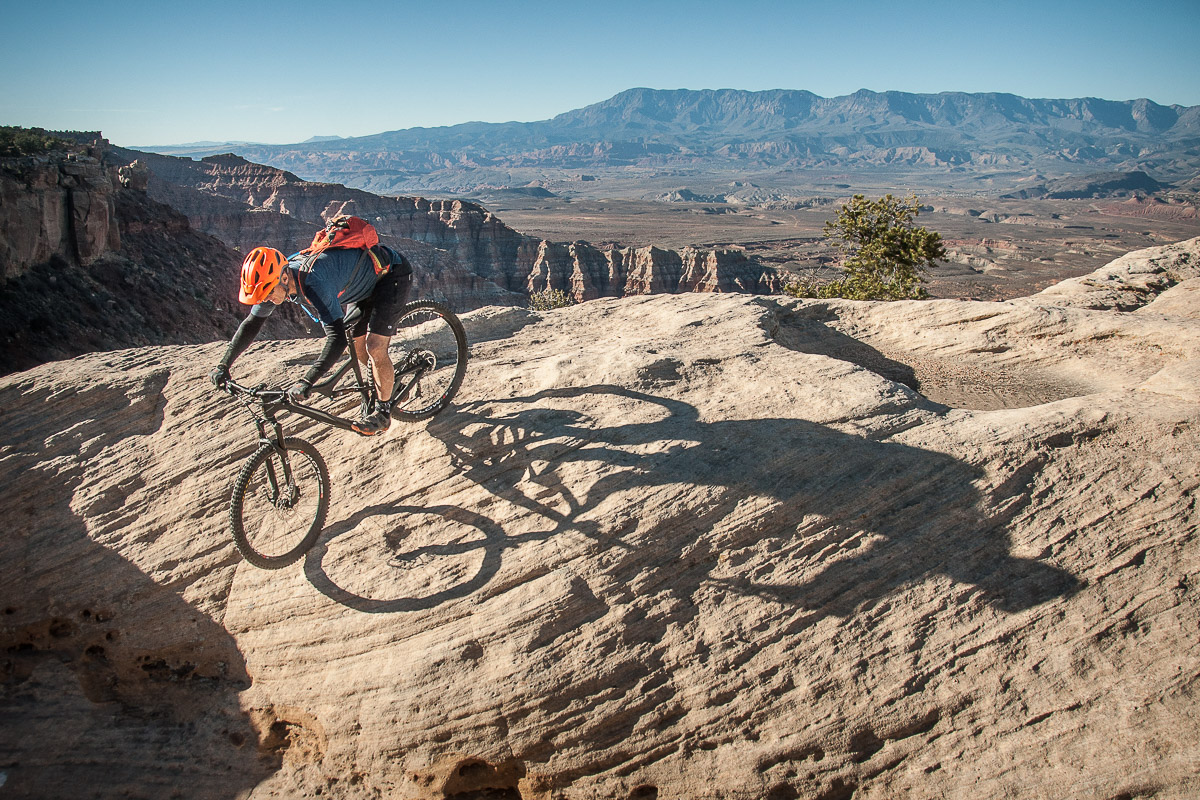 I cannot speak to the other Chasing Epic destinations yet, but the lodging for this trip was amazing. My room was ready when I arrived on day one with a ton of schwag waiting for me too. I’ll not spoil the surprise, but it was some really good stuff! Separate from that everyone also got a box of ride nutrition goodies handed over when they arrived – in it were plenty of ride snacks for the weekend – a lot of this ended up in my bag to come home. Even though I had a roommate, I didn’t feel cramped at all. We really only went to the room to sleep, any other time was spent riding or eating meals as a group in the bigger, “presidential” villa with everyone – that’s also where the beer was!

Preparation: Be in Shape

Chasing Epic promises riding epic trails all weekend and certainly delivers on that promise.  Riding more than 10 miles a day for three days straight is a bit of a luxury for me. I am a typical weekend warrior with the occasional after work week-day ride.  At best, I average three bike rides in a week at between 8-15 miles a ride. For me to prepare for three days of riding 15+ miles a day, I had to really try hard to ride more. I signed up for the November ride at the end of September. I got as much riding in as I could and probably got in around 100 miles on my local trails over those two months. I was able to get in a few 20+ mile rides as well and when I didn’t feel beat afterwards I realized I was where I wanted to be. I had been riding all summer as well including commuting to work on my other bike, so I think I was in pretty decent shape overall. My suggestion is to come up with a ride plan that works for you. The aim for me was to build my endurance. The way I looked at it was I am going to be riding in a new place on trails I’ve not seen before: I wanted to get to as many of them as I could. 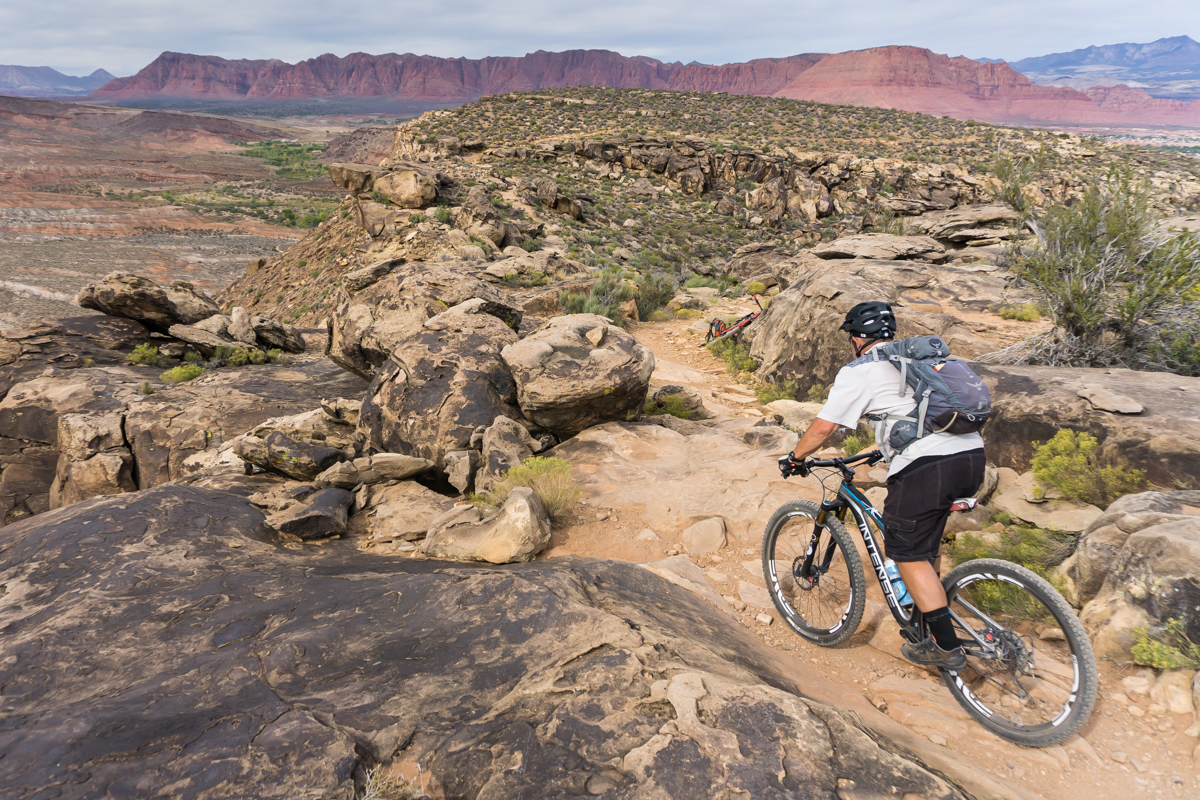 One caveat here… I am not a doctor, nor do I pretend to be one on a blog. This may not apply to everyone, but for me coming from where I am in New England, I don’t ever ride at any sort of altitude. I think my early arrival helped a bit. I’ve traveled enough to places at high altitude to know that things feel different the higher up one goes. While St. George and Hurricane are not really all that high in altitude (coming in between 2,600-3,300 ft +/-) it is still at least 2,500 feet (at a minimum) higher than my normal rides. Maybe my early arrival gave me time to acclimate as I felt totally fine for the weekend. In any case, if you’re thinking about one of these trips, maybe plan on arriving a little early. If you’re like me and thinking about a Crested Butte trip, you may really want to get in early- at 8,000+ feet, I think most people might need at least a day.  At 8,000+ feet, I think I’ll plan on arriving at least two days prior. Plus, I’ve been reading about the area and it is totally MTB friendly – sounds like a nice place to spend an extra couple of days in August and dork out over mountain bikes. Maybe I’ll see you at the bar “acclimatizing”. 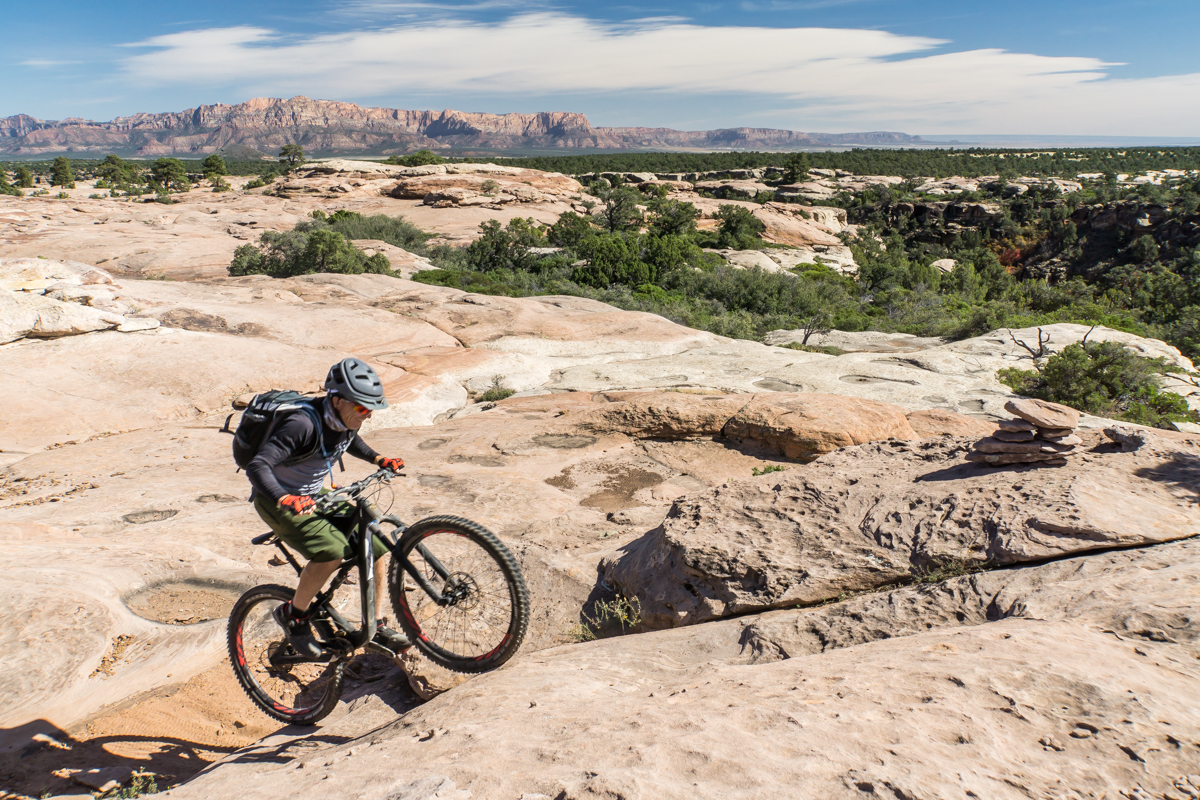 Coming Soon: Part II, Packing and the Trip Itself!

About the Author:  Corey is a native New Englander, born in Maine and currently residing  just outside of Boston.  A member of IMBA and the New England Mountain Bike Association (NEMBA), he has been mountain biking off and on for more than 20 years but has only recently started traveling to ride in new places. Favorite local trails include Harold Parker State Forest in Massachusetts and the Kingdom Trails in Vermont, where the legendary NEMBAFest which held every June.